A person who doesn't stop talking is either in a state of pathological agitation or is imprisoned by an egocentricity that knows no limit. In either case, verbal diarrhea is a symptom of the impossibility of communicating with others. 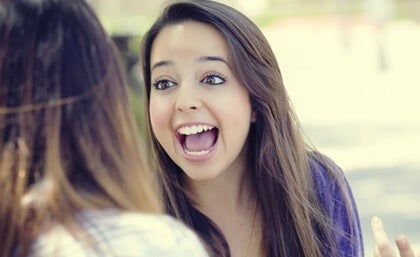 There’s a difference between being communicative and having frequent verbal diarrhea attacks. There’s nothing wrong with people who like to talk. However, some of them get out of hand. They can’t stay quiet to the point that they’ll talk to the TV if they don’t find someone to talk to.

Sometimes, this behavior overwhelms others. There’s just no way for them to stop talking. Usually, these people skillfully pick their “victims”. They tend to be quiet and affable people who wouldn’t dare to ask them to be quiet. They wouldn’t leave them alone during an attack of verbal diarrhea, either.

In addition, another characteristic that defines lovers of verbal diarrhea is the topic of conversation. This almost has a focal point: themselves. Those around them have to simply tolerate a detailed commentary of their opinions, livelihood, likes, plans, and memories. Absolutely everything revolves around them. This, of course, ends up completely exhausting others. So why can’t they be quiet?

They know everything… and more

Verbal diarrhea attacks are frequent in those who believe they know everything and more. At least they think they do. To them, there’s no topic they haven’t delved into. Everything that has happened in the world has happened to them or is about to.

Even if they haven’t studied or read about a topic, they have no problem taking the podium. If they actually do know about the topic, it’s much worse. They’re like a walking sermon that lectures and gives data no one is asking for. They can become a real nightmare!

These types of people adore long words and flowery speeches. In a way, it’s as if they felt that the entire world was a great auditorium waiting for them to share what they have to say. They don’t think they have anything to learn from others. Basically, they want to be the center of attention and show off.

In addition, verbal diarrhea can affect those who don’t necessarily want to give sermons about every kind of topic. Rather, they need to inform others of their lives or other people’s lives. They emphasize even the tiniest details and narrate them as if they were of transcendental importance.

Also, they may tend to assume that other people are constantly asking for their opinions or advice. You barely might be able to say something about your own life, as they’ll immediately start offering their opinions. Whew! The same thing happens with those who complain non-stop.

The problem is that, once you fall into their web of words, inertia makes you stay there. The other option is to go through the uncomfortable situation of asking them to be quiet, as they’ll likely not choose to do this on their own.

What should you do about someone with verbal diarrhea?

A person with verbal diarrhea might have a psychological disorder or might just an egomaniac. Although the latter isn’t necessarily considered a condition, it’s certainly not a sign of great mental health.

Some states of mania, anxiety, or agitation make people talk non-stop. Talking is a way to express their anguish. Their restlessness keeps them from being quiet or listening. Their way of talking is compulsive, and often disordered. They can go from one topic to another without connecting them. In those cases, listening to them can help. Likewise, making comments might actually help them calm down.

In the case of egomaniacs, they don’t have the psychological tools to establish two-way communication. Monologues are their thing, and other people are simply their audience. In those cases, it’s better to simply not participate in their narcissistic game.

Did You Know That Talking Is Like Natural Medicine?
If we never learned to talk when we were little, our brains would not develop as they do. Talking plays a vital role in other functions that are also extremely important for the social and rational animals that we are. Read more »
Link copied!
Interesting Articles
Personal Development
Winning at Life Isn't Synonymous with Competing

Personal Development
Personal Responsibility: When You're the Stone in Your Own Shoe

Personal Development
Are You Aware of How You Nourish Your Mind?

What would you answer to anyone who asks you how you nourish your mind? Perhaps you'd talk about your conscious…