Types of Speech Disorders and Their Characteristics

How many types of speech disorders are there? What are their causes and symptoms? Today's article will answer these questions. 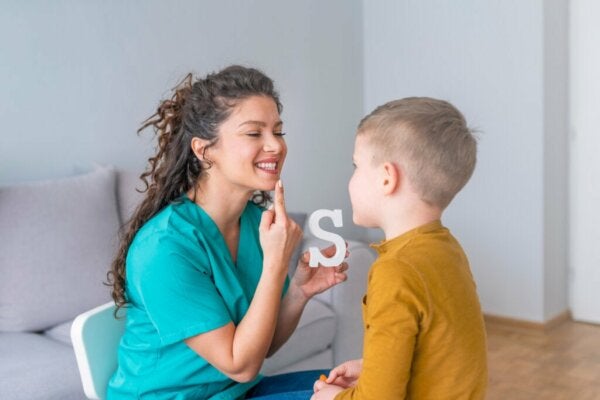 Verbal language is one of the most powerful tools human beings possess. However, some people suffer from speech disorders. This is negative, as speech allows people to communicate and transmit information such as feelings and desires and perpetuate their culture and knowledge.

Many psychologists have analyzed the role of language in human development. One of them was Russian psychologist Lev Vygotsky, who made important contributions in this regard.

Having a speech disorder can have all types of social, academic, and personal consequences. Speech is part of your daily life and it allows you to interact, share information, and express yourself. But how many speech disorders are there? Continue reading to discover their definition, causes, and symptoms.

“Speech is power; speech is to presuade, to convert, to compel.”

There are various types of speech disorders, which are impairments in creating or forming speech sounds. These make it difficult for children to speak because they may affect their pronunciation and vocabulary formation. Thus, they can’t speak in a way in which others can understand them.

The following communication disorders are in the DSM-5 (Diagnostic and Statistical Manual of Mental Disorders):

This article addresses types of speech disorders, not communication disorders. It’ll discuss only some of the above, the ones that affect speech. Continue reading to discover the most important characteristics of each.

Language disorder (or dysphasia) involves a series of difficulties in understanding and expressing language. These affect children even when their intelligence is appropriate to their developmental level. In addition, these manifest in oral and written language, including reading. In other words, it’s a fairly broad disorder.

Depending on its origin, there can be two types of dysphasia:

In addition, there are two types of dysphasia according to the altered process:

Finally, there’s a special type of acquired epileptic known as Landau-Kleffner syndrome. This is a receptive-expressive disorder that manifests with multiple alterations in the patient’s EEG (electroencephalogram). It’s caused by an epileptic stroke and its typical onset is between the ages of three and seven. In addition, it usually appears abruptly.

This is a phonological disorder, also referred to as a phonetic disorder. Dyslalia involves difficulty in the articulation of words. The most common ones are the substitution of sounds, distortions of sounds, and lack (omission) or addition (insertion) of sounds. Its cause is functional. In other words, no organic lesion justifies it (its etiology is still unknown).

This speech disorder is one of the most frequent ones in childhood. Estimates indicate that between two and three percent of children between the ages of six and seven have a moderate or severe form of dyslalia. Its prevalence increases in mild cases. In order to diagnose it, the mistakes a given child makes when speaking must be inadequate to their developmental level and interfere with their social and academic functioning.

Stuttering or dysphemia is one of the common speech disorders

Also referred to as childhood-onset fluency disorder in the DSM-5, this is one of the best-known speech disorders.

Dysphemia affects fluency and rhythm of speech. When speaking, a person with this condition emits one or more spasms, as well as blockages, at the beginning of or during the speech. This results in an interruption of their normal rhythm of communication.

This disorder usually begins between the ages of three and eight. This is because normal speech pattern begins to be acquired at these ages. There are different types of dysfunctions depending on its duration:

Curiously, people with this condition don’t stutter when they sing, recite a learned text, when they’re alone, or talk to pets. This map of affectation suggests it’s a disorder influenced by social anxiety.

Furthermore, according to a study by Ramos (2019) that collected other studies, music and its components (such as rhythm) can help stutterers control their speed of speech, reduce facial tension, increase their phono-respiratory coordination, and reduce their speech disfluency.

This speech disorder causes significant difficulty articulating the sounds that comprise speech. It appears as a consequence of alterations in the buccal-phonatory organs (for example, congenital malformations in the lips, teeth, or tongue). Thus, its cause is organic.

This disorder is due to alterations in neuromotor control (injury to the nervous system). Thus, it translates into difficulty articulating words, originated by neurological problems that alter the muscular tone the mouth emits speech with. It keeps a person from properly articulating words. Like dyslalia, dysarthria is one of the best-known speech disorders.

There are many classifications of aphasia. It’s quite severe, according to the classical neuropsychological model, as opposed to dysphasia, which is less severe. Instead, what differentiates dysphasia from aphasia is that the latter is acquired (dysphasia is congenital). At least according to the cognitive model.

However, other authors suggest that what differentiates aphasia from dysphasia is it manifests in adults and not in children. Whatever their classification, what’s clear is that aphasia implies a loss or alteration of language. It occurs as a consequence of a brain alteration or injury (for example, a stroke or a blow on the head).

The various types of aphasia manifest through different symptoms depending on the location of the injury. This article contains more information about them.

The King’s Speech and communication disorders
The King's Speech is definetely an excelent piece of art that brings us closer to a forgotten problem in films: stuttering. Read more »
Link copied!
Interesting Articles
Clinical Psychology
Eco-Anxiety, a Consequence of Climate Change

Clinical Psychology
Schizotypal Personality Disorder: What Is It?