The nonverbal language that blocks communication significantly influences how you relate with others. What you say with gestures and postures contributes to you either getting closer or separating from the world around you. 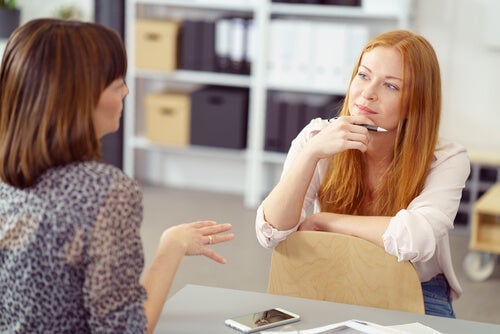 The kind of nonverbal language that blocks communication often sends a message of rejection or disconnection to your interlocutor. Most of the time, you send these types of messages inadvertently. In other words, you issue them without being aware of it.

The problem is that unconsciousness doesn’t keep this body language from negatively affecting your relationship with others. Also, it brings about an unconscious rejection as a response. Thus, this is a factor that can either poison or feed your relationships away from your focus of consciousness. Continue reading to discover seven examples of the kind of nonverbal language that impairs communication.

The eyes are one of the essential elements of body language. They reflect who you are and what you feel. They’re the central focus of communication because they show your disposition towards the interlocutor like no other.

A constantly fixed gaze is one of the elements of non-verbal language that impairs communication. It involves a hint of aggressiveness and is typical of liars. When someone stares at another without blinking, they’re either challenging or lying to them.

2. Expressionless face, an element of nonverbal language that impairs communication

An impassive face without gestures or one that’s tense sends a blocking message. It’s as if the person who’s speaking isn’t really there. As if they weren’t really involved in the interaction.

A person who gestures seems more reliable because it’s often a sign of spontaneity and sincerity. On the contrary, if the face has no expression, its bearer will be treated accordingly. In other words, as if they aren’t really a part of the interaction.

3. Nonverbal language – the volume of your voice

The volume of your voice almost always says much more than words can express. Some people speak very softly, as if they have no right to say what they’re saying. This downplays their own words.

Others practically scream and their voice invades their environment. What they’re seemingly expressing through with this is that they want to impose their will on others. Of course, this impairs communication.

4. Objects inside the mouth

All of these behaviors seem less than spontaneous. There’s insecurity and it leads to such oral behavior. It’s like these people are unconsciously trying to find their mothers so she can support what their little ones are saying.

The smile is an element that immediately opens the doors of communication. It means acceptance, warmth, and pleasure. It shows a good disposition towards the other. A person who doesn’t smile while communicating and seems too serious is straining their communication.

A fake smile is another element of nonverbal language that impairs communication. It gives a certain artificiality to what a person says. One can detect it when a person only laughs with their lips and not with the rest of their face.

Some people just can’t keep their hands still when they’re speaking. So, if a person touches their ear while listening to another, it could mean they want to block what they’re hearing. It’s a sign of rejection of what the interlocutor is saying.

Similarly, when a person scratches their neck while they’re talking, it means they’re not sure of what they’re expressing. It implies doubt and fear for what their interlocutor may think. Thus, it impairs communication.

The crossed arms stance constitutes the representation of a defensive attitude in many cases. It simulates a shield that you put to protect yourself from people. Of course, this doesn’t apply to situations when the temperature is cold and you’re simply trying to conserve as much body heat as possible.

Also, a person who shrugs their shoulders is sending a message of mistrust. It’s very common for this gesture to be accompanied with a hunched back. It means a person feels helpless and overwhelmed by a situation.

All the nonverbal language that impairs communication reveals that which people try to hide in many instances. Beyond polishing gestures, what’s truly convenient is evaluating what goes on through your mind when you interact with others.

Personal Development
Solving Problems: Why Do We Always Do Things the Same Way?

Problems are, naturally, one of the greatest concerns in life. Life isn't easy and is hindered by the difficulties that…

Personal Development
What Makes You Trust Other People?

If we look at the number of people who find it difficult to trust others, then we can easily see…