She Turned On the Music to Turn Off Her Life 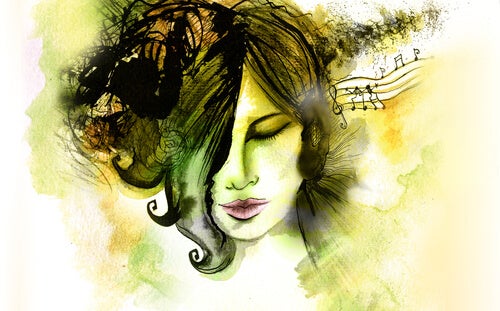 Tired of hearing constant criticism and drowning in tears, she decided to turn on the music to turn off her life for a while. That way, she could silence the jeers and the insults and have some peace and quiet. However, her mind didn’t stop scolding her and thinking the words that she had always heard.

With her tears sliding down her face and the music turned up loud, she tried to withdraw and imagine herself in any other place. Anywhere would do as long as she didn’t hear anything that would hurt her. Life can’t be like that – it certainly doesn’t deserve to be nothing but screams. Life shouldn’t be full of constant insults, but that was all she knew.

Convinced that she wasn’t good enough, and having lost all hope that things would change, she decided that she would be guided by what she heard. And as a result, she got lost in her own world, and the screams she heard became her own self-fulfilling prophecy. Her voice turned into a whisper because she couldn’t fight against the screams that took root within her.

And like a little bird with broken wings that fell into a box, she remained closed off in her world of craziness and irrationality. Because hearing that she was good for nothing every day, that it would be better if she weren’t there, was killing her slowly, and she knew nothing but hate.

This hate came from deep inside her and held her back. There’s no worse sentence than being pushed down by other people’s words, because words, like bullets, can stop the heart and poison the blood with fear and indecision. And from that point, everything she did was because others wanted it, not because she was thinking of herself.

Transformed into a caricature of herself, every scream turned into one more stone that was thrown onto her tomb. Dead inside like a robot, she did whatever other people wanted to avoid those hurtful words. And now there wasn’t even music to help her because there was no life inside her. No melody could make her forget the burning she felt inside.

Other people’s words had buried her alive for not fulfilling even a tiny bit of their expectations.

So that’s how her days went, wearing a smile as a mask and a look in her eyes that could freeze your soul. Until one day she realized that she didn’t hear the shouts anymore, but there still wasn’t peace inside her. She felt empty and misunderstood, and she didn’t understand why she wasn’t happy if there were no more shouts, jeers, or insults to drown her.

So then she began to ask herself what it was that she really wanted, that she had always wanted, and she understood that it wasn’t for the screams to go away. She wanted to be free and live her life without caring about what other people said, and without having to fulfill all their expectations.

She then understood that you can’t take the screams out of your head if they haven’t left your heart, if with every beat, they remind you of everything you lost for not following your own path. She took a deep breath and let her imagination fly. She turned the music back on, but this time it was to listen to the melody that rose up in her heart.

You are who you are, not who they want you to be

She then decided that nobody would throw her off course. She decided that she wasn’t who they said she was. She wasn’t useless, lazy, nothing – but when she heard these words, that’s what she became. She started to open up the backpack filled with the stones that had been put in her way, each stone representing the words that other people had spoken of her.

Armed with bravery and the music that flowed within her, she took the first step and decided that their words would never again guide her life, because she was going to follow the steps outlined below:

And like a true warrior, showing how brave she really is, she stopped submitting to other people and started to live life the way she wanted. With resolve and a big smile, she took control of her journey. She would no longer have to turn music on to turn off her life for a while, because now she was the one who wrote the melody.

Wellness
The Worst Sadness Is The One Nobody Sees

Sadness adjusts really well to our spirit when we open it up all the way. If it finds an ever…

We tend to analyze relationships, but what happens when we're single? Being single also defines us. It says something about…

Wellness
If There's No Tenderness, It's Not True Love