The Truth About Bulimia in Teenagers 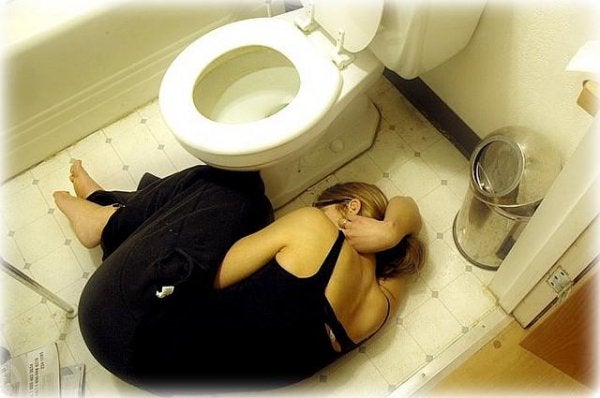 If only everything were as easy as wrapping up in a cocoon and waking up as an adult. But everyone has to go through adolescence, which is a period where the body and the mind experience a great many changes.

Peer pressure, self-esteem issues and other factors can trigger bulimia in teenagers, which is the most common age for this eating disorder to rear its ugly head.

Bulimia is an eating disorder characterized by consuming large amounts of food in short periods of time, only to later eliminate them through induced vomiting and/or the use of laxatives.

Because of it, the person goes through long periods of fasting, intense physical exercise and saunas, so as to lose body fluid. The cause of these behaviors is mainly fear of gaining weight, accompanied by symptoms of depression, feelings of guilt and loss of self-control. Nine out of 10 people who suffer from bulimia are women.

Over time, this mental illness can cause serious physical consequences, like stomach bleeding, loss of tooth enamel, damage to the esophagus , dizziness, fainting, hair loss, mouth sores, abnormal menstruation and damage to the heart and kidneys. It’s estimated that 5% of people who suffer from bulimia end up dying as a result.

The urgency and importance of detecting bulimia in teenagers is because, the sooner we diagnose and treat it, the easier it is to cure. If not, it tends to turn into a chronic disorder: it’s estimated that about 20% of patients keep fighting against this illness after as long as 10 years.

While it is true that a person that’s diagnosed as bulimic must have developed this type of behavior over a period of at least three months, it is important to be aware of any behavior that indicates the presence of this eating disorder.

Those with bulimia often hide it very well because they feel ashamed of their feeding practices and when it’s finally diagnosed as part of their lifestyle.

Treatment to combat this evil is generally complex. In the past, it was common for the patient to be hospitalized until they were able to control their eating habits, and quit the bingeing and purging cycles, but the problem wasn’t being pulled out by the roots and the symptoms would reappear after a while.

The patient perceives reality differently: they have a distorted body image and have no idea what normal, healthy portions of food look like, meaning that anxiety control and psychotherapy play a very important role.

Some studies indicate that people with bulimia have an overproduction of testosterone (the dominant male hormone in the body, though it is also present in women) and that the use of birth control pills (which contain estrogen) helps alleviate the symptoms. However, this treatment is still under review.

We cannot, unfortunately, remain aloof about the changes we go through during adolescence, as we would in the safety of a cocoon. However, we can be aware of the early symptoms of bulimia and stay alert, so as to encourage growing up with a healthy mind in a healthy body.

Psychology
The Qualities of a Good Teacher

Up until just a couple of decades ago, women in their fifties were seen as sweet grandmothers. At that age…