The Tree of Wishes, An Osho Story 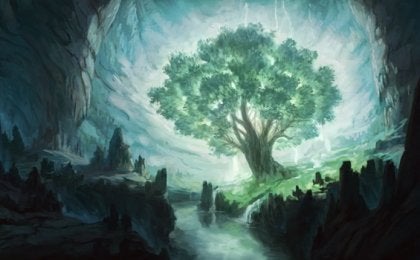 The tree of wishes is one of Osho’s best-known stories. Osho was one of the most important religious leaders of the 20th century. He was considered a spiritual teacher, in spite of his harsh criticism of Mahatma Gandhi and other leaders of his time.

Osho was, without a doubt, a controversial character. People saw him as an extraordinary speaker and a unique thinker. However, several scandals involving Osho tarnish his memory. Many remember him for his huge collection of luxury cars, his deportation from the United States, and the fact that 21 countries refused to let him enter their borders.

For some, he was a hero, for others, a villain. Whatever your belief, the truth is that his teachings are valid. Ironically, he himself probably violated many of his own teachings during his lifetime. Nevertheless, his stories and wisdom are worth passing down. The tree of wishes story that we share today shows that Osho had the gift of great wisdom.

“Don’t pay too much attention to fear because it becomes an autohypnosis. If you go on repeating that you live in fear, that your life is governed by fear, and that you are dominated by fear, then you are helping it.”

This Osho story talks about the Hindu concept of heaven. Hindus believe that Eden is a place populated by extraordinary things. One of these extraordinary things is the tree of wishes. These trees have magical powers. They seem like common trees, but they can instantly grant anything that a mortal desires.

The story goes that there was once a man who was obsessed with material things. He had a poor spiritual life and dedicated all his time and energy to only what was right in front of him. One day, the man fell asleep and his spirit began to wander. It didn’t make sense that this would happen while he was alive, but there was a mistake in the natural order of things. So, his spirit made it to the world beyond this one.

Suddenly, the man’s spirit reached a place that branched off in many directions. He didn’t know which path to take, so he chose the closest one. Although he didn’t know it, he had chosen wisely. The path he was on led directly to paradise.

When the man arrived, he was fascinated by everything that he found in the enchanted garden. It was beautiful, but he had no idea that he was in heaven. Consequently, he behaved as if he was in an ordinary place. He walked for a while until he felt tired. He decided to sleep for a while. Without realizing it, he curled up at the foot of one of the wishing trees. Once he was comfortable, he fell into a deep sleep.

When he woke up, he thought about how hungry he was so he said, “I would love to have something delicious to eat, I’m so hungry”. To his great amazement, he saw the most delicious foods appear in front of his eyes. Without thinking twice about how this could have happened, he started to eat. The only thing on his mind was filling his belly.

When he was done eating, he felt thirsty. Then, he said out loud, “I would like something to drink, I’m very thirsty”. He had barely finished the sentence when the most delicious wines appeared in front of him. He drank them immediately.

As soon as he was no longer hungry or thirsty, he realized that what was happening wasn’t normal. Osho says that the man started to suspect that something strange was happening. He was afraid. He said, “Am I dreaming or are ghosts playing tricks on me?”

As soon as he said this, the tree of wishes made his words come true. Suddenly, a multitude of ghosts appeared, toying with the man and making fun of him. The man was terrified. Without really thinking, he said, “They’re horrible! They’ll surely kill me!”

As you can imagine, the ghosts killed him. As silly as Osho’s story might seem, it carries an important truth. The story speaks to the magic of words. In one way or another, we attract the things we want. So, if you want your life to be a certain way, desire will put you in the right direction. There are other things that come into play, of course, but this is a start. With your words, you shape your conscious and your will. That’s why, though it’s difficult to believe, you end up getting everything that goes on in your mind.

10 of the Best Osho Quotes that Will Make You Think
Osho was an amazing philosopher who talked a lot about love, conscience, and personal growth. So here we'll give you Osho's 10 best quotes to reflect on. Read more »
Link copied!
Interesting Articles
Literature and Psychology
Steppenwolf: a Book to Help You Reflect

Culture
What's Morbid Fascination and where Are its Limits?

Culture
Drug Use, Abuse, and Addiction

There are many differences between drug use, abuse, and addiction. People tend to use these terms interchangeably, but knowing what…