Sense8, An Anthem of Love and Freedom 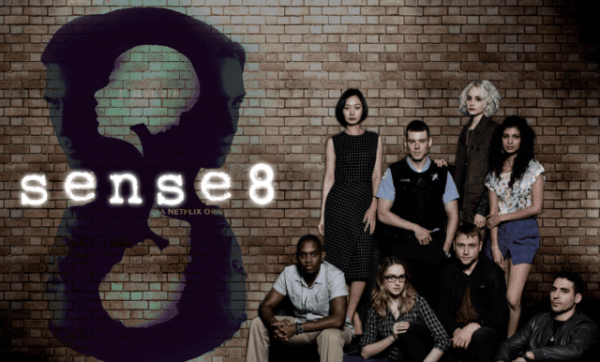 From the creators of The Matrix, Sense8 is a drama series about eight people who are connected telepathically. The Wachowski sisters directed and created this intense show. Like the rest of their work, we can define this series with one word: different.

Sense8 is very different from most other TV or Netflix shows. The viewer is often thrown off balance by the concept and unique characters in the show. However, Sense8 is undeniably an anthem of love and freedom.

The series tells the story of eight strangers who are connected psychologically and emotionally, despite their various differences. Each character comes from an entirely different background. They each live in a different country.

However, these differences don’t keep the characters from connecting on a deeper level. They work and collaborate together, helping each other by using each characters’ strength. Together, the group fights to survive as an antagonist, a telepath who shares their power but has very different objectives, chases them down. Sense8 is a prime example of how values are the link between cultures. Shared values interconnect civilizations.

The plot of Sense8

Sense8 features the story of eight strangers (Will, Riley, Capheus, Sun, Lito, Kala, Wolfgang, and Nomi) of different cultures, races, and sexual orientations. These characters experience the tragic death of a woman, Angelica, through shared visions or dreams. After this shared experience, they become mentally and emotionally connected. This connection allows them to communicate without speaking, feel what the others are feeling, and share their knowledge, languages, and skills.

During the first season, we meet each of the eight protagonists as they are living their own lives. Despite their telepathic connection, they don’t actually know each other in the real world. The season explores how they discover and accept their telepathic powers that make them “sensates”.

While they attempt to figure out why they’re connected and what this connection means, another sensate named Jonas helps the group. As in every good series, there’s also a villain, a man known as Whispers. Whispers tries to capture members of the group and is able to invade their thoughts.

By the second season, the group’s connection has been perfected. They understand and enjoy the connection, collaborating to help the group. They seem to value more what unites them than what separates them. Their differences create possibilities for mutual enrichment.

During this season, some of the characters meet in person and create a plan to defeat Whispers. Episode by episode, we get to watch as each character evolves and grows individually, which in turn strengthens the group as a whole. They each become more valuable to the group and perfect the connection between them. The connection between the eight becomes so strong we begin to see that they’re all, in fact, one entity.

One thing that makes this series so remarkable is the open discussion of topics such as gender, sexuality, feminism, and faith. The characters talk about and portray these different topics. There are eight protagonists, but each one needs the others to survive. They all have their own loves, friendships, families, and fears. Secondary characters Angelica, Jonas, and Whispers are also really interesting in their own way.

The show begins with eight strangers who become the main characters. These characters have well-drawn, realistic personalities. Each has unique characteristics that make them essential to the group. Although they’re very different, they all share one significant connection: the same birthday, August 8th. They’re all 27 years old when the show begins.

Will is a Chicago cop who suffers from migraines and has visions due to a childhood trauma. As a child, he witnessed a murder that was never solved. Will is a good cop, loyal, and protective, and becomes the de facto leader of the group.

Riley Blue, whose real name is Riley Gunnarsdottir, is an Icelandic DJ. She comes from a difficult past filled with loss. She fled to London to escape from it. Riley often shows music‘s amazing power of awakening and connecting our souls.

“Death doesn’t let you say goodbye. It carves holes in your life, in your future, in your heart.”

Capheus is a compassionate Matatu driver from Nairobi. He’s passionate about justice and is a fan of actor Jean Claude Van Damme. His mother and his best friend support him a lot. His skills as a driver are essential throughout the show.

Sun is a businesswoman from Seoul who moonlights as an underground kickboxing star. She has a complicated family history that eventually lands her in jail. Her knowledge of martial arts and her teacher’s support prove to be useful when the group encounters various obstacles.

Lito is a famous actor who stars in action movies and soap operas. He lives in Mexico City. His sensitivity and great acting skills become useful in various situations. His ability to lie and persuade help get his group out of more than one tricky situation. He relies heavily on his friend Daniela’s friendship and his partner Hernando’s unconditional love for the strength he needs during difficult times.

Kala is a pharmaceutical chemist and devoted Hindu from Mumbai. She’s forced into an arranged marriage with a man she doesn’t love. Her knowledge of chemistry and medical issues comes in handy on more than one occasion.

Wolfgang is a thief from Berlin who’s good at opening safes. He has unfinished business with his father and is heavily involved in organized crime. However, every good team has a member who does what needs to be done without worrying too much about the consequences. Wolfgang also has the unconditional support of his righthand man, Felix.

Nomi is a transgender woman from San Francisco. She’s a political blogger and a hacker. Her knowledge of computers and numerous contacts play a big role in the series. Nomi becomes one of the most influential characters in the story. This is thanks to her hacker friends and her one true love, Amanita.

“Your life is either defined by the system, or by the way you defy the system.”

“Who am I?” is the title of one of the episodes of Sense8. This episode sticks in your mind because of how shockingly emotional it is. This question is quite difficult to answer. In this episode, the main characters grapple with and try to answer this question.

What or who can define our identity? Is it a matter of where we’re from, what we might become someday, or what we’ve done? What we have? Who we love or who we’ve loved before? What we’ve lost? “Who am I?” is a question that generates many more questions. It’s a difficult question to answer. Building our identity is a very complex process.

These questions make us think how dangerous labeling can be. Putting a label on someone is the opposite of trying to understand them. It reduces a person to a role marked by the color of their skin, race, religion, sexual orientation, or other identifiers. These are aspects of our life that, for the most part, we can’t choose. While these characteristics may be part of who we are, they don’t define us.

And we arrive at a beautiful final conclusion: human beings are equal despite our differences. No one is better or worse than anyone else. There are no two people who are exactly the same. Everyone is unique. And this uniqueness is what makes us equal and equally important.

Sense8, An anthem of love and freedom

Last year, Netflix made the difficult decision to cancel the series after two impressive seasons, full of emotional moments and suspense. Due to the insistence of numerous fans of the show, the series ended with a special two-hour episode. The long-awaited finale aired on June 8, 2018.

“Look, love is not something we wind up, something we set or control. Love is just like art: a force that comes into our lives without any rules, expectations, or limitations. Love is like art, it must always be free.”

The highly anticipated final episode was going to be released on February 14, 2018. This seemed like an ideal date because this series is all about love and friendship, as well as an anthem of love and freedom.

This series shows love in the broadest sense of the word: love for yourself, love for others, and of course, a strong love for life. Over and over again, the series insists on the importance of the freedom to love and be loved. Love your life, value your own existence, and also value the existence of your loved ones.

There are many unforgettable moments in Sense8. The series is unforgettable due to its originality, sensitivity, unique sense of humor, and action sequences.

Thelma and Louise, A Feminist Shout in a Man’s World
A look at why Thelma and Louise is one of the most enduring feminist films and why it was so radical in its day. What can we learn from Thelma and Louise? Read more »
Link copied!
Interesting Articles
Literature and Psychology
Emily Dickinson and Her Inner Demons

Culture
What is Utopia?

"Utopia" is a common word in our everyday life. It's a useful argument or counterargument when discussing ideal or hypothetical societies. However, it may have a much deeper meaning than…

Culture
Traveling Makes You a Better Person and More Creative

Traveling is a way to break with the usual and enjoy a feeling of wellbeing that comes from exploring, discovery…

Culture
When Someone Doesn't Love you, but they Won't Let you Go

Love always puts us in dilemmas, although some of them are happy. However, sometimes they are not so rewarding. For…