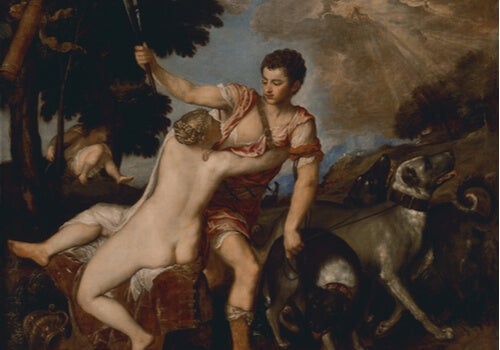 According to art critics and historians such as Arnold Hauser and Ernst Gombrich, Titian had an enormously important impact on the world of art. In fact, he was recognized as a great painter from a very young age.

In his portraits, Titian was able to capture the depth of the human spirit. His religious paintings cover the breadth of human emotion, from the charm of young madonnas to the profound tragedy of crucifixion and burial.

In his mythological paintings, he captured the joy and abandon of the pagan world. Titian’s nudes, Venus (Venus and Adonis), and Danae (Danaë with Nursemaid) set the standard for physical beauty and eroticism that has never been surpassed.

Art critics applaud his command of color and his creative work had a profound influence on countless generations of artists. The work of great masters such as Rubens and Nicolas Poussin is proof of the old adage “Imitation is the sincerest form of flattery”.

Tiziano Vecellio, known as Titian in English, was most likely born sometime between 1488 and 1490 in Pieve di Cadore, a village close to Belluno, Italy. No one knows his exact date of birth.

He spent the first few years of his life in his birthplace. His parents were Gregorio and Lucia Vecellio. Titian was the oldest of five children.

His father was a distinguished town councilman and soldier. He worked as the superintendent of the Pieve di Cadore castle and also managed local mines.

Many of Titian’s family members were notaries, including his grandfather. Thus, it’s no surprise that the painter’s family was well-established in the region.

At the age of 10, Titian’s parents sent him and his brother Francesco to live with their uncle in Venice. There, he discovered his artistic talents. From the moment they arrived, both brothers started as apprentices in the studio of a famous mosaicist named Sebastiano Zuccato.

People say that the Hercules fresco in the Morosini palace was one of Titian’s first paintings. Others include The Virgin and Child, In Vienna, and Visitation of Mary and Elizabeth, now located at the Academy Galleries in Venice.

In 1508, the frescos in Fondaco dei Tedeschi painted in collaboration with Giorgione di Castelfranco, another one of Bellini’s disciples, jump-started their careers. Their close collaboration explains why it’s difficult to tell the difference between their work from the beginning of the 16th century. Of those frescos, only the ruined outlines survived. For this particular commission, the main scene assigned to Titian was the Allegory of Justice.

The two young artists were also recognized as the leaders of the new school of “modern art”. This type of art was associated with a more flexible style of painting. In other words, a style that was free of the rules of symmetry and other formal conventions that Bellini still followed.

After Giorgione’s untimely death in 1510, Titian continued to paint in a traditional style for a while. However, he soon developed his own style, with audacious and expressive brushstrokes.

Titian’s first solo commission was to paint frescos of the three miracles of Saint Anthony of Padua in 1511. According to many art critics, the best one is The Miracle of the Speaking Babe.

Giovanni Bellini died in 1516, leaving Titian without a rival in the Venetian School. For sixty years, Titian was the undisputed master of Venetian painting. Since Titian succeeded Bellini, he began to receive a pension from the Senate.

“I purposely avoided the styles of Raphael and Michaelangelo because I was ambitious of higher distinction than that of a clever imitator.”

During this period, 1516-1530, Titian changed and perfected his style. He left behind his early ‘Giorgionesque’ style and started to undertake broader and more complex themes. It was during these years that he attempted a monumental style for the first time.

In 1518, he painted his masterpiece Assumption of the Virgin for the main altar of the de Frari church. This extraordinary piece, unique in Italy for its color and scale, delighted everyone.

Titian became quite famous. In 1521, Titian was at the height of his popularity. Although at that point he had already been a well-recognized artist for some time, it was around then that buyers clamored for his work.

The Death of Saint Peter Martyr

In 1530, Titian painted one of his most extraordinary pieces, The Death of Saint Peter Martyr. Sadly, this piece was destroyed in 1867. All that remains of it now are copies of the original. The piece combined extreme violence and a landscape largely composed of a great tree that permeates the scene and seems to accentuate the drama in a sort of Baroque style.

The artist simultaneously worked on a series of small Madonnas, set in beautiful, pastoral landscapes. Titian also painted mythological scenes during this moment in his career. One of his most famous mythological pieces, The Bacchanal of the Andrians, is hanging in the Museo del Prado. These might be some of the most brilliant productions of Pagan culture of the Rennaissance.

Titian’s meeting with the Sacred Roman Emperor Charles V in Bologna in 1530 was an important moment in his life. He painted a life-sized portrait of the emperor in a style that was extremely innovative at the time.

Titian quickly became the main painter for the imperial court. That gave him incredible privileges, honors, and titles. From that moment on, he was the most popular court painter in all of Europe.

Titian knew how to gain the admiration and esteem of the rich and powerful. He was extremely talented, of course, and his paintings had a conceptual subtlety and beauty that was unmatched. Titian was also popular because he was charming.

Portraits of the Rich and Famous

The large number of Titian portraits that powerful people had in their collections is evidence of his fame. None of his contemporaries painted as many portraits as Titian, although some people believe that his students are the ones who actually painted those portraits.

D’Avalos, the Marquis of Vasto, paid Titian a generous pension. Charles V also paid him a significant annual sum. Another source of income was a 1542 contract he had to supply grain to Cadore, his birthplace. He visited almost every year, and people there considered him generous and influential.

Titian had a favorite villa in the neighboring hills of Manza. There, he observed the form and effect of the landscape for his paintings. Titian’s mill, which you can see in many of his paintings, was located in Collontola, close to Belluno.

In 1525, Titian married a woman named Cecilia, the daughter of a barber. The union legitimized his first son, Pomponio, and the two that came later. Titian’s son, Orazio, was his favorite and would later become his assistant.

Around 1526, Titian met and formed an intimate friendship with Pietro Aretino. Pietro was an influential and extravagant character who played an interesting role in the culture and politics of the time. Titian painted his portrait on at least three occasions and sent one to Gonzaga, the Duke of Mantua.

After Cecilia’s death in 1530, Titian married again and had a daughter named Lavinia. Unfortunately, Titian’s second wife also died. His sister, Orsa, moved from Cadore to help run his house and take care of his children.

Titian was about 90 years old when the plague reached Venice. Titian died of the plague on August 27th, 1576. He lived an extremely long life and was the only plague victim in Venice to receive an Ecclesiastical burial. They buried him in the Santa Maria Gloriosa dei Frari church.

His tomb was close to his famous painting, the Pesaro Madonna. There was nothing to mark his tomb until much later when the Austrian leaders of Venice asked Canova to build the large monument that’s still there today.

Loving Vincent: A Mind in Colors
Van Gogh was a very prolific painter having produced over 900 works as part of the post impressionism movement, focused on light and movement. Read more »
Link copied!
Interesting Articles
Culture
Uri Geller and the Story of a Collective Scam

Culture
Voicing Your Opinion is Good for Your Mental Health

Culture
An Ending is Just Another Beginning

I've always liked open endings in cinema, television and literature. Endings that make us imagine how the story might continue.…

The activities our children do are very important. Swimming, karate, theater, painting... there are endless activities that can enhance our little ones' skills. What you probably don't know is that yoga…