Tics in Childhood: Characteristics and Treatment

Tics are sudden, rapid movements that result from involuntary contractions of one or more muscle groups. Although it's one of the most common pediatric disorders. the treatment is usually successful. 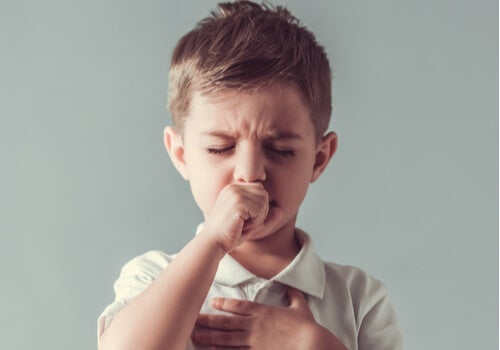 Tics are involuntary, recurrent, unpredictable, non-rhythmic muscle movements that can be temporarily controlled by willpower. Tics in childhood tend to worsen due to stress or anger and can be reduced by distraction or concentration.

In reality, tics are one of the most common motor disorders in children. The involuntary part of a tic seems to be the initial impulse, and the movement is often carried out to relieve the impulse. However, younger children with rapid, repetitive tics describe them as a sudden occurrence they can’t control.

Tics usually begin between the ages of four and seven. For most children, the first tics take the form of repetitive blinking, sniffing, throat clearing, or coughing. They’re more frequent in males than females, with a ratio of 3 to 1.

Tics vary considerably in their severity and frequency. However, many children between the ages of 4 and 6 with minor and transient tics won’t seek medical attention. In approximately 55% – 60% of young people, these tics will barely be noticeable by the end of adolescence or early adulthood.

In another 20-25%, the tics become less frequent, and, finally, in the remaining 20%, the tics continue into adulthood. Some of these adults will even report that the tics worsen.

Clinical characteristics of tics in childhood

Tics are classified as motor or vocal and simple or complex. Simple tics are manifested by sudden movements or short, repetitive sounds. Complex motor tics are coordinated, inappropriate, and sequential movements. For example, repeated shaking of the head, repeating the gestures of others (echopraxia), or making obscene gestures (copropraxia).

Complex vocal tics are usually carried out in an inappropriate setting. An example of this would be the repetition of syllables, blocking people’s words, the repetition of their words (palilalia), repeating words they hear (echolalia), or using obscene words (coprolalia).

How tics are classified in the DSM-5

Children with tics are generally unable to control their impulses. There are subtle differences in neuropsychological and motor functioning, as well as a high rate of psychiatric or developmental comorbidities (where one or more conditions or symptoms are present). These include:

Tics have a complex multi-genetic etiology and are highly hereditary. The concordance between monozygotic twins is 87%.

In the past, tics were considered to be related to behavior or stress and often called “nervous habits” or “contractions”. Experts now know that tics are neurological movements that can be worsened by anxiety but not caused by it.

The underlying mechanisms involve several neural networks in the brain, between the cortex and the basal ganglia (fronto-striatum-thalamus circuits). However, they also involve other areas of the brain such as the limbic system, the middle brain, and the cerebellum. Abnormalities in interoceptive awareness and central sensorimotor processing have also been described.

Behavioral interventions include several techniques. However, the specific treatment that each child needs will depend on the initial evaluation, the response to the treatment, and the incidents that arise during it (Bados, 2002).

Habit reversal therapy (HRT) and exposure and response prevention (ERP) are evidence-based interventions for tics. HRT and ERP will reduce the combined severity and frequency scores (Yale Global Tic severity score) between 40% and 50%.

The habit inversion treatment proposed by Azrin (Azrin and Peterson, 1988) involves teaching the patient to recognize the impulse before the manifestation of the tic. They then teach them to carry out an action called a competitive response that reduces the chances of their tic occurring.

The practice of being able to prevent the exposure and response of the tics leads to the need for conditioning. This therapy, therefore, encourages the patient to feel and endure the need for the tic (exposure) without producing the tic (response prevention). In a session of a certain fixed duration, the therapist asks the patient to try to hold back and prevent the tics. Then, they record how long they can do it for.

There’s no set time they have to achieve. Patients have a lot of help in each session, and the length of time during which they’re able to control the tics lengthens progressively.

Using exposure therapy with response prevention on a regular and systematic basis gives the patient practice in holding back the tic’s impulses. Over time, the patient’s ability to control tics improves. During the session, the therapist asks the patient how strong the impulses are. This exposes them to the anguish of having a tic, despite only talking about it.

Pharmacological treatment of tics in childhood

The decision to use medication depends on the nature of the tics and doctors generally only use them for serious and annoying tics that cause pain or injury. Current evidence shows clonidine (a presynaptic alpha-2 agonist) to be the first-choice medication.

In contrast, antipsychotics or antidopaminergics seem to be more effective in adults. Clinical practice supports good results for Aripiprazole in children.

Although doctors don’t usually resort to benzodiazepines to treat tics, they do sometimes in acute and serious cases. They can use them as a way of reducing anxiety when the tics appear, but it’s preferable not to use them as there may be a knock-on effect which can cause other problems.

The Effects of Toxic Stress on Children’s Brain Development
Toxic stress can have harmful effects on learning, behavior, and health throughout a child's lifetime. Find out more in this article! Read more »
Link copied!
Interesting Articles
Health
Body Image Issues in Young People

When we talk about body image, we refer to the mental and subjective representation of our appearance. Sometimes this perception…

Interestingly, most of the good times often take place around a table. Unfortunately, for many people, this poses the eternal…

Recently, we found some pieces of research regarding electronic devices and sleep alterations. According to them, both factors are deeply…