The Lesson of the Three Wise Monkeys at the Toshogu Sanctuary 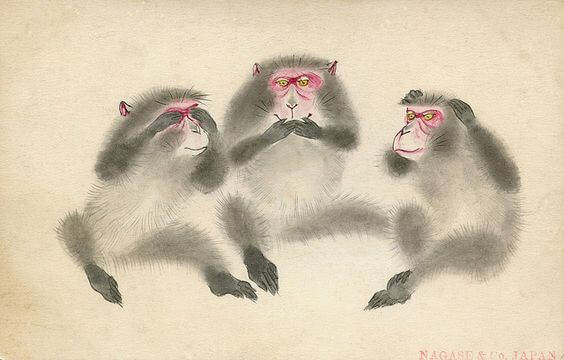 The lesson of the wooden sculpture of the Toshogu sanctuary, those famous three wise monkeys, inspires us still today.

Its original message was simple and profound: “do not listen to what will lead you to do wrong”, “do not see bad behavior as natural” and “do not speak badly without reason”.

Interestingly, time and our Western worldview simplified the teaching a bit, leaving the classic “see no evil, hear no evil, speak no evil”.

A motto we even see in emoji’s, though it somewhat distorts the original idea — and even the order of monkeys.

However, the lesson goes even further, because this 16th century work erected in honor of the shogun Tokugawa Ieyasum, has its roots in Confucius’s teachings. For many, the message of the three monkeys also has much to do with Socrate’s “triple-filter test”.

We can always learn a lot if we immerse ourselves in this classic iconography and traditional wisdom. Let’s reflect and update our knowledge a bit.

The three wise monkeys of Togoshu embody the moral code and mysticism we love, and we want to share it with you today.

What legend says about the three wise monkeys

The legend of the three wise monkeys has its origin in Chinese mythology. It tells a striking story starring three curious characters.

These three unique creatures were sent by the gods as observers and messengers. In other words, they were to testify to the good and evil of humanity and report back to the deities.

Now, these divine messengers acted according to a magic spell by which they were granted two virtues and one defect, like so:

What emerges from this story is first and foremost the need to always keep our spirit pure. It teaches us to avoid listening to anything that causes us to act badly. It says to avoid speaking without reason and to not see evil actions as natural.

There is an interesting parallel between the legend of the three wise monkeys and this story from the Greek philosopher.

Here he talks about how a student of his came to his house one morning anxious to tell him a rumor. To the young man’s dismay, the wise man explained that before revealing that news he had to think about these three things:

These three filters, as we see, have a lot to do with what each monkey of the Toshogu temple represents.

“Even if you are a minority of one, the truth is the truth.”
-Gandhi-

Kikazaru, the monkey who covers his ears

Kikazaru, besides being wise, is prudent. He is the monkey on the left and says to cover your ears before you hear certain information if you want to preserve your harmony.

Therefore, it’s not a question of shying away from certain data, truth or evidence. It’s not a cowardly or defeatist attitude, but rather is setting aside information that is not useful and that is harmful, in order to protect one’s integrity.

The monkey that covers his mouth: Iwazaru

Iwazaru is the little monkey in the center that represents the need to not transmit evil, to not gossip and, above all, to be very cautious when spreading stories that, as Socrates reminds us with his triple filter test, are not true, nor are they good, nor even less useful.

From a Socratic point of view, Mirazu represents an invitation to close your eyes to that which is not working, not useful, not good… Again, this is not passive or cowardly.

It’s not about turning the other cheek, condoning evil (remember that the legend says it’s the monkeys themselves who decide the punishment).

Rather, it’s about having the wise perspective of one who knows how to distinguish good from bad. It’s about punishing wrong in order to be in the right with goodness and people who encourage us to be better.

To conclude, both from the three wise monkeys and the triple-filter test of Socrates, we can distill one primitive teaching that’s survived centuries, now more useful than ever.

3 Steps to Emotional Wisdom
A lot of us have been taught to box up or repress our emotions, but with these 3 steps to emotional wisdom, you can learn to live a healthier life. Read more »
Link copied!
Interesting Articles
Culture
Narrative Mediation - An Approach to Conflict Resolution

Culture
Pleasure and Purpose: The Ingredients to Happiness

Participating in activities that provide us with pleasure and purpose can increase our happiness. In fact, scientists agree that both…