Falsehood can come in many shapes and it isn't specific to humans. This type of conduct can also be seen in animals. 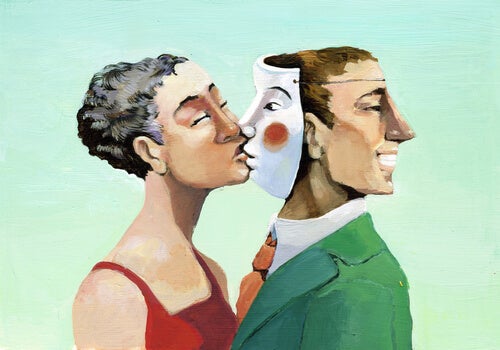 Humans are natural-born liars. We could say that there isn’t a single person on Earth who’s been completely honest in every single moment in their lives. Humans can use different kinds of falsehood. Each has many levels, motives, and different consequences.

Morality condemns any form of falsehood. This could be a mistake because lying is part of human nature and the use of simulation, lies, or deception could be valid depending on the circumstances.

The concept of truth is questionable as well because it’s difficult to establish absolute truths about many things. Likewise, you can be so convinced about something and repeat a lie without knowing or understanding that it isn’t true. Meanwhile, it’s worth pointing out the relativity of morality.

“Truth will rise above falsehood as oil above water.”

Different kinds of falsehood in nature

Humans aren’t the only ones who use different kinds of falsehood. Nature is full of examples of animals who use deception to fool predators or simulate behaviors to get something in exchange. They use falsehood as a way to survive.

When an animal stays still to go unnoticed in front of its predator, they use simulation. The same thing happens when they disguise themselves or go into hiding. The goal is to fool those that could harm them. Something similar happens when an animal wants to steal food and distracts its rival to get it.

Humans start lying from an early age and for similar reasons. It’s part of any animal’s nature to look after themselves. It’s a survival instinct. Thus, honesty is a learned behavior but it doesn’t mean the same thing in every society. In some societies, honesty becomes part of a pact for peaceful living; in others, lying is sinful.

Simulation is the less notorious of the different kinds of falsehood. In its simplest form, it’s about pretending. This implies bending reality to a certain degree. As with the other forms of falsehood, there are different levels of simulation. It can go from putting on a little makeup for a night out to the concealment of different aspects of yourself or your life, even taking on a new identity.

Why do people use simulation? There are many answers to that. Sometimes, people use simulation to appeal to others. Other times, they use it as a survival tool. For example, they try not to show fear against a rival. People can also simulate ailments for their benefit.

Although these kinds of falsehoods may seem similar, they have some important differences. Lying is related to verbal statements. You lie when you say something is true and know it isn’t. Deception is a wider concept. You can fool someone using words, but also with how you act or by creating situations that conceal reality. A deception involves a whole plan, whether it’s basic or very elaborate. In this case, there’s also a process of awareness-raising.

In human beings, simulation, lying, and deceit can be very sophisticated. What makes these behaviors morally wrong? Two things: motivation and purpose.

A few years ago, in Colombia, there was a raid against the guerrilla where the people used deception, lies, and simulation. This raid helped free a group of hostages. Can this procedure be seen as “morally wrong”? In your daily life, you’ve probably asked yourself the same question.

Simulation, lying, and deception aren’t always morally wrong. Their motivation and purpose are what define their morality. Either way, you’ll gain more from examining these conducts, than from flat out rejecting them due to morality concerns.

White Lies, Compulsive Lies, or Pathological Lies – What’s the Difference?
We teach children that lying is bad but some lies are socially acceptable. We call them white lies, and everyone uses them to some degree. Read more »