Three Billboards Outside Ebbing, Missouri: The Anger Within Pain 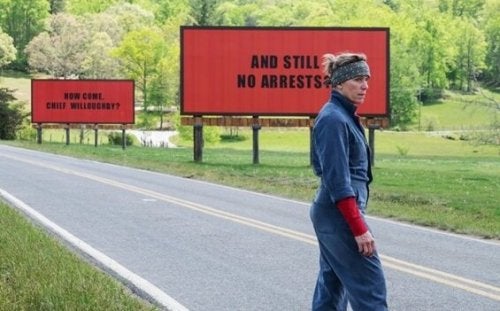 Three Billboards Outside Ebbing, Missouri is a powerful movie about all the anger and desperation within pain. In this movie, it’s a mother’s pain. Mildred Hayes puts up three billboards in her town to speak out against the police’s ineffectiveness after her daughter’s rape and murder. Unfortunately, she doesn’t receive empathy from her neighbors. Instead, the billboards just make them uncomfortable.

The Academy of Motion Picture Arts and Sciences held its Oscars ceremony a few months ago. At the time, people were sure that, even with all the bets in its favor and all the positive reviews, Three Billboards Outside Ebbing, Missouri wasn’t going to win the award for best picture.

“Because through love comes calm, and through calm comes thought. And you need thought to detect stuff sometimes, Jason. It’s kinda all you need. You don’t even need a gun. And you definitely don’t need hate. Hate never solved nothing, but calm did. And thought did. Try it. Try it just for a change.”

Like we said earlier, the three red billboards this desperate mother puts up really bother her community. In fact, the movie itself made people all over the United States uncomfortable. For one thing, the movie’s setting is a small town in Missouri, in the heart of the USA. It has a subtle, and not an accidental, metaphor in it.

In this ambiguous landscape, the movie shows you an apparently normal part of the world. But it doesn’t take long for you to see how easily some people can avoid justice, and how violence is a language of its own. It can bring together almost any space. You see it in the police officers who don’t hesitate to use torture. You see it in gender norms, in the unhelpfulness of the neighbors who choose to look the other way, and in the dark humor of a movie where every single character comes out wounded, with traumas that can only be resolved through anger.

Three Billboards Outside Ebbing, Missouri isn’t a comfortable movie. It’s a furious, indignant portrait of a woman trying to find justice. But it’s also much more than that. Just like any fable (though this is the harsh, bitter kind) there’s a transformation at the end. This is thanks to hope, the ray of sunshine that comes out in even the most difficult, desperate of situations.

Three Billboards Outside Ebbing, Missouri, a reflection on the anger within pain

There’s nothing as devastating as losing your own child. But the suffering it causes will always be worse if you’ve lost them due to violence, murder, rape… Nowadays, everyone has heard at least one story about this kind of thing. It wasn’t that long ago that Spain was all over the news for this exact kind of thing. Maybe that’s why it’s not hard for us to put ourselves in the same position as Mildred Hayes, with all her suspicious looks and moments of rage. None of it comes as a surprise to us knowing she has spent 7 months waiting for an answer about the tragic loss of her teenage daughter.

The most interesting part of it all is that her character’s behavior should absolutely make us uncomfortable. She’s unpredictable, her words are filled with disgust and contempt, and she doesn’t hesitate to turn to violence when she feels that it’s necessary. Still, Mildred Hayes is the emotional center of the movie, and it’s impossible not to empathize with her. It’s impossible not to understand why she does what she does, even when it turns extremely violent.

Frances McDormand plays her character brilliantly, while we watch as she uses anger as a response to powerlessness and vulnerability. She’s almost like the embodiment of the anger that comes from love, the kind that can do nothing but scream. All she can do is try to make people aware of her desperation through the three billboards. She can only hope that, by doing it, she’ll get some kind of results.

The kind of love that transforms

People criticized Martin McDonagh, the director of Three Billboards Outside Ebbing, Missouri, for being a British-Irish man trying to show a portrait of the Deep South that was based on a stereotype. Racism, homophobia, ignorance, dysfunctional families, violent police, people without goals in life, sexual violence, misogyny…

But only looking at the superficial side of things and only paying attention to a criticism of the negative aspects of a large part of the United States would mean missing out on so much of what makes Three Billboards Outside Ebbing, Missouri great. Every character has an equal capacity for terrible violence and indescribable goodness. It’s extremely easy to hate some of the characters right from the beginning. Yet some of them blur the lines, throwing you for a loop when they transform into something new and hopeful by the end of the movie.

A movie about human emotions

The movie is an amazing portrayal of human psychology. Even as difficult as the central plot is (a mother speaking out against the police’s ineffectiveness in her daughter’s case), the movie still makes room for comedy, friendship, and above all, an inspiring letter about love that changes everything.

There’s a mix of absurdity and seriousness that gives shape to a story where emotions are the true stars. Emotions are what provide all the feelings in this strange setting, with characters who are constantly ready to blow but still manage to captivate us.

Before we go, we should point out that Three Billboards Outside Ebbing, Missouri isn’t based on a true story. At the same time, the plot is sadly familiar. It’s full of symbolism and catharsis for people who have lost children and still have no answers. The people living emptier lives, in the silence of a society that’s already left them behind. The three billboards are like our conscience: uncomfortable for some, but the only option left for others.