Saint Valentine was a real person. A fair amount of historical evidence tells us who he was: a brave priest who married hundreds of soldiers and their brides in spite of the prohibition instituted by Emperor Claudius II. 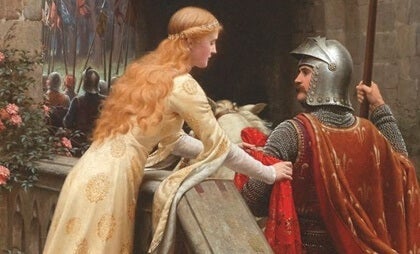 Contrary to popular belief, Hallmark didn’t invent Valentine’s Day to sell more products. Behind all the marketing, presents, trips, and romantic dinners lies a story so unique and fascinating that it deserves to be told. February 14th is the result of the efforts of a Pope to stop certain pagan customs practiced in Rome and eulogize a brave priest named Saint Valentine.

Historians say that Pope Gelasius I invented Valentine’s Day in 495 BC as a brilliant strategy to put an end to the festivities in honor of the Roman god Lupercus. Lupercus was the god of fertility and protector of sheep. Shepards and a large portion of the population looked forward to the 13th – 15th of February, as they honored the she-wolf who nursed Romulus and Remus, the founders of Rome.

The Catholic elite at the time purposefully chose February 14 for their new holiday to abolish the Pagan tradition. The date stuck and continues to be a holiday. The Catholic Church, however, under the leadership of Pope Paul VI, eliminated the holiday from their calendar in 1969.

The Second Vatican Council believed that the holiday mixed myth and legend. Nevertheless, Pope Francis wanted to bring the holiday back in 2014 and imbue it with religious significance again. He celebrated a mass attended by hundreds of couples to pay respects to Saint Valentine himself.

Who was Saint Valentine?

Saint Valentine existed. Archeologists discovered a catacomb in the Viale Maresciallo Pilsudski (the Pinciano neighborhood in Rome) dedicated to him. Devotion to Saint Valentine also exists in churches in other countries such as The Assumption of Saint Mary in Chelmno, Poland; the Stephansdom Church in Vienna, and the Church of the Blessed John Duns Scotus in Glasgow, Scotland.

His story starts in 3rd-century Rome.

“For this was on Saint Valentine’s Day, when every bird cometh there to choose his mate.”

Emperor Claudius II, the man who forbade soldiers to marry

In the 3rd century BC, the Roman Empire was having a lot of problems. The first was the fierce incursion by the Goths. The second was a lack of work force in the fields and the army. The emperor needed strong soldiers, dedicated to the cause. His solution was to pass an unusual and noteworthy law.

He allegedly decided to ban soldiers from marrying so they would be more committed to their leader and focused on battle. The emperor also ordered the army to pursue, torture, and murder pesky Christians who were causing a lot of issues as well. It’s in this context that the unique figure of Saint Valentine appeared.

Texts such as The Golden Legend by Jacobus de Voragine and the Nuremberg Chronicle (1493) talk about a brave priest who didn’t just protect the Christians. He also defended traditional marriage and secretly married soldiers to their partners.

This brought the government’s wrath upon him, and they took him to the judge called Asterius of Rome to be tried. The judge said that if he truly was a saint, he’d be able to cure his daughter’s blindness. Saint Valentine cured the judge’s daughter and, thus, saved himself from the penalty. Not only that, but he converted Asterius and his entire family to Christianity.

The relief of having his life spared was short-lived. Soon after his trial, Emperor Claudius imprisoned him again. He was tired of challenges to his power and jealous of the priest’s fame.

It was a quick trial, and Emperor Claudius condemned Saint Valentine to death. Before they martyred him, however, they allowed Saint Valentine to write a letter to the young woman he had cured. Some saw it as a love letter, others as a goodbye. Whatever the case, the act was the beginning of the custom of sending Valentines to those you love on February 14.

After that, Saint Valentine was publicly beaten with sticks and stones. On February 14, 269 BC, he was beheaded in full view of the crowd at the Via Flaminia.

Geoffrey Chaucer and the romantic traditions of Valentine’s Day

In Chaucer’s poem Parliament of Fowls (1382), he writes about a man giving his lover a letter on Saint Valentine’s day. There are later testimonies about how this practice became popular in the English court and later among French royalty.

Therefore, the Duke of Orleans sent his wife a letter with a romantic poem while he was imprisoned in the Tower of London during the Battle of Agincourt. As you can see, the celebration of this holiday encompasses a series of stories and the traditions have endured over the centuries.

Perhaps that comes as no surprise, considering that love is what inspires us and gives us life. In that sense, we celebrate Saint Valentine every day of the year.

Valentine’s Day: Who Was the Real St. Valentine?
By the looks of it, the story of Valentine's Day has more to do with legend than reality. However, in most parts of the world people still commemorate it. Read more »
Link copied!
Interesting Articles
Philosophy and Psychology
The Ten Spiritual Realms of Zen Buddhism

Culture
A Buddhist Story about Patience and Mental Peace

We have a bad habit of wanting almost everything instantly and doing things immediately. We prefer to change our decisions…

Culture
Do You Know the Social Impact Theory?

These days, pretty much everyone understands the concept of self-esteem. You probably already know that it has to do with…