The Timeless Story of Christmas

The story of Christmas has no one origin. Instead, several cultures seem to have influenced the creation of this one day of peace and solidarity. 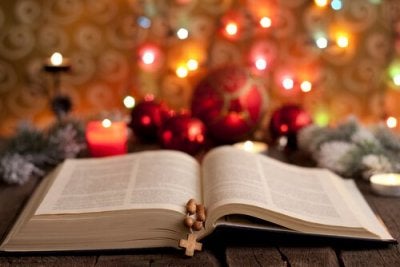 The story of Christmas is linked to the general feelings we have about the winter in the Northern hemisphere, where this holiday is rooted. Winter turns everything white and snowy. A long time ago, this climate made people sit around together to warm up by a fire.

This wintertime feeling that things are dead or asleep and waiting to be reborn is what helped Christmas take root in the Western world. The story of Christmas is the story of how many different traditions blended into one single holiday that is now celebrated in tons of different places.

This holiday basically celebrates the birth of Baby Jesus, a central figure in Christianity. But there’s actually no historical document that proves December 25 was the day he was born. In fact, if you read on, you’ll see that Christmas actually has some pagan origins.

“I will honour Christmas in my heart, and try to keep it all the year.”

The story of Christmas

It all began in the Roman Empire (which would later be the main Christian force in the world). Romans had a holiday where they celebrated the winter solstice from December 17 to 23. During the holiday, they honored the god Saturn, which is why they called it “Saturnalia”.

The Romans gave gifts and food to the poor during this holiday. It was also common for them to eat huge meals and drink heavily. To put it another way: they went wild, just like they did many other times of the year.

But they weren’t the only ones celebrating around this time of year. The ancient Egyptians celebrated the birth of the god Osiris on December 25. That’s not the only coincidence between Egyptian mythology and Christianity, either. They also believed that Horus was born from the virgin goddess Isis at the end of December.

Other cultures involved in the origins of Christmas

The Greeks also considered December 25 a special day. They believed that Dionysus (god of wine) and Adonis (god of beauty) were born that day. Some people also argue that the Hindu god Krishna was born on December 25, though this isn’t a universal Hindu belief.

Mithraism even made its way into the Roman Empire after they invaded Persia. It became so important in Roman society that it actually competed with Christianity for a long time. Their traditions mixed in with the Roman tradition of Saturnalia.

How Christmas became a holiday

Once Christianity had really taken hold, theologists started to debate over when Jesus was born. The gospels hadn’t been very specific. Some said it was during King Herod’s reign, while others said that it was after Quirinius rose to power in 6 AD.

That lack of certainty led some people to celebrate Christmas on May 20 and others on April 20. This caused a lot of confusion, so they called for a council to resolve the issue, like they had done many times before. Mithraism still had many followers, so the priests decided to make December 25 Jesus’ birthday.

Basically, they absorbed the Persian beliefs that had made their way into Roman society. This happened in the year 354 AD, under Pope Liberius.

The story of Christmas is timeless because it has origins in so many different cultures and eras. It blended traditional celebrations of peace, friendship, and solidarity into one single holiday. Ultimately, there’s just something about the last week of the year that makes us want to improve and celebrate the beginnings of a new life.

Empty Chairs: When Christmas Is Tinged With Nostalgia
Empty chairs. Broken relationships. Separated families. Christmas, a time for revelry and reunions, is tinged with nostalgia, sadness, anguish, and unrest. Read more »
Link copied!
Interesting Articles
Culture
Do You Know What Bud-Sex Is?

Culture
5 Reasons Why it's Not Worth Being a Pessimist

Cinema, Television, and Psychology
Into the Wild: Getting Rid of Material Stuff

Why choose to live like a beggar when you have everything? Why give up every luxury and comfort to live…