Emotional maturity isn't a natural consequence of growing old. Moreover, something really common is to see many adults still dealing with tantrums, with those frustrations that emerge when things and people aren't as they want or expect. The good news is that they can apply the three-hour rule. 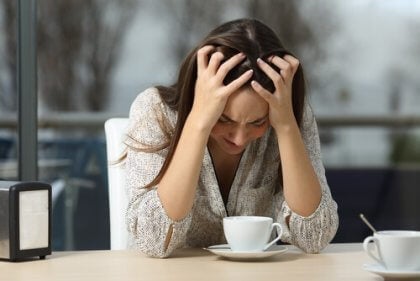 The three-hour rule helps adults deal with disappointment. Surprisingly enough, tantrums are very common in grown-ups, although they’re not visible and striking as children’s. As a rule, an adult is more discreet, quiet, and silent because, after all, they must also face their frustrations. They must deal with those adverse emotions that make them lose their cool.

Admit it, neither the years nor the maturity made you an effective creature when it comes to your emotions. It’s true that, on some occasions, we meet adults who burst into tantrums similar to three-year-old children. Do note that each person still harbors their own inner child and they still get hurt and disappointed when things don’t go “their” way.

When your high expectations about certain things don’t materialize, you must learn to handle your disappointment and your anger. This is because accumulating an excess of negative emotions will, sooner or later, eat you up inside.

We all have a tendency to throw a tantrum in our daily lives but learned to hide them at some point throughout our lives. However, having them constantly will only lead you to an exhausting state. This is why you should have some simple strategies to deal with them.

Adult tantrums are very common but manifest very differently than they do in children. To begin with, one of the reasons why many people go to psychological therapy is because their anxiety levels are so high and they don’t know how to go deal with it. Thus, when professionals delve deeper into the origin of such dysfunctional states in their patients, it’s common to discover they follow the same pattern.

Some people blame everyone else for their disappointments: family, friends, significant other, coworkers, etc. Everyone is against them and they all fail them and should be punished by their wrath. This is precisely the kind of frustration that becomes a tantrum, even if many of the times it’s only internal. It becomes a silent paddle that incessantly rows between frustration, rage, and disappointment.

Adult tantrums don’t just manifest as rage and the kind of aggression that leads someone to break things. Many of these people isolate themselves to vent it all out. Thus, it isn’t easy to rationalize many of the things that happen to us every day. Some people are definitely capable of handling and accepting their daily frustrations and disappointments. However, others are vulnerable and should know some strategies to help them cope.

Daniel Goleman points out in his book Destructive Emotions that our emotional brain is the first to react when something bad happens in our environment. This means everything goes through the emotional filter before it reaches the rational one.

Other researchers such as Joseph E. LeDoux of the University of New York also observed something similar in the studies they conducted. Humans basically act on their emotions, and, hence, they lose it on more than one occasion.

So what can we do when we feel trapped by emotions? How should we act in those moments when we only feel anger and frustration? And how do we act when something we don’t like comes our way?

You have three hours to act

Our tantrums often have negative consequences. On the one hand (and less frequently), some people react in an aggrandizing way. For instance, they raise their voices and speak disrespectfully or even break objects. On the other hand (and much more common), others deal with their anger and frustration in silence.

You can use a simple strategy with a peculiar starting point to avoid one or the other: awareness. Allow yourself three hours to process and deal with any adverse, annoying, or frustrating event. After that time, you’ll be late to solve it intelligently and maturely. You’ll also be able to properly deal with your emotions, especially with your frustration.

First of all, breathe and don’t get carried away by the first emotion you have. Remember that anger is the first feeling to emerge when you’re frustrated. Thus, you should welcome it but never let it lead your actions.

The first step you must take is to lessen its impact and relieve the physical tension that comes with it. Try to mitigate the adverse thoughts that it usually brings along.

If you keep your anger and rage under control, then everything will be easier because you’ll make better choices.

Tantrums are typical of children who haven’t yet learned to manage their emotions. Dealing with tantrums is a normal part of their maturity process. Therefore, adults should have already passed that stage. The most important thing to do after appeasing your rage is to focus and think maturely and in a well-balanced manner.

Take two or three hours to figure out the reason for your discomfort and frustration. Begin with the following questions:

Answer the above questions calmly and patiently.

The last and most important step is to generate a response or adjust your behavior throughout these three hours. There’s no point waiting until tomorrow. Adult tantrums happen because there’s something threatening about a particular situation and it frustrates them. If you consider that a course of action is appropriate after carefully assessing it, then act on it.

For example, you can ask for explanations from anyone who did something hurtful and demand that they respect your boundaries. This means that you should solve conflicts reasonably, in a way that will make you feel better and will make you respectful. If after careful reflection you realize you acted impulsively, then admit it and ask for forgiveness.

In conclusion, emotional maturity doesn’t just happen when you grow older, it doesn’t update automatically at a certain age. You must work towards this process. Thus, there’s nothing better than keeping your tantrums to yourself and deal with them silently. Follow the three-hour rule!

Emotions
Don't Say This to A Person Affected by Anxiety

What do you say to someone affected by anxiety? How do you react to that loved one who's about to…