The Ten Most Stressful Jobs in the World

The most stressful jobs in the world are those that demand the most protection and self-care. Stress is a factor that directly affects physical and mental health. For this reason, the activities that generate it the most must have a special after-care. 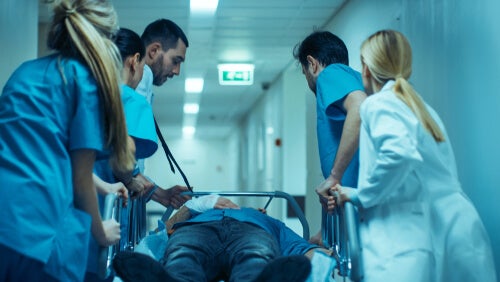 In general, the most stressful jobs in the world are those that expose people to danger, especially if this threat is potentially fatal. We’re talking here about risks that, in themselves, cause people significant distress.

However, we should note that this is a generalization. Sometimes, the most stressful jobs don’t depend on the activity itself, but on the conditions the worker has to work in. A simple clerk, without being exposed to any real danger, may have a high stress load because of the pressure their bosses put them under.

All types of jobs require an element of self-care management and protection from employers or managers. Health should always come before productivity.

Here’s a list of what we consider to be the ten most stressful jobs in the world.

“No passion so effectually robs the mind of all its powers of acting and reasoning as fear.”

The ten most stressful jobs

The military services are either involved in war or preparing for it. An armed confrontation is one of the most distressing situations one can experience.

In the midst of a conflict, life takes on a whole new dimension, in addition to the environment that, on a psychological level, can cause plenty of battles and mourning on a constant basis.

Statistics show that, among the military in combat, there’s a high rate of psychological disorders. These disorders often remain well after the actual conflict or situation and one of the most serious is post-traumatic stress disorder.

Firefighters are often exposed to serious threats as well. Much of their work is performed in situations where there’s little control and a lot at stake.

Every fire or disaster has its own particular characteristics, and so there’s always a significant level of uncertainty. Emergency situations can happen at any time, and these workers must always be prepared and alert.

Although today’s aircrafts have very high safety levels, they still depend on a pilot to ensure that everything goes well. They need to be constantly aware of everything that’s going on both inside and outside the aircraft.

In addition to this, it’s a job that requires constant changes in schedules and long absences from home. To a large extent, it’s a routine job. Thus, it’s not surprising that it’s one of the most stressful jobs.

Police officers deal with situations on a daily basis involving weapons or other objects and devices that can inflict significant damage. Like the military, they’re frequently exposed to unforeseen and uncontrolled situations that put their lives at risk.

They have to tolerate a high level of uncertainty because criminals aren’t predictable in their thinking or their actions. It’s due to this that they can suffer such high stress levels.

Event planners don’t risk their lives nor expose themselves to tragedy. However, they do have to take into account many different factors at the same time. Above all, they have to ensure that diverse and independent activities will come together to create excellent results.

On the other hand, it’s also common for them to be involved in negotiations, some of them very tricky, and they have to find a way to ensure that all parties end up satisfied.

Finally, the fact that they’re organizing public events means that they’re especially exposed to criticism and judgment. This is why we’ve included them in the list of the most stressful jobs.

The stress that can develop in a reporter’s work environment depends on three factors. Firstly, the schedule, which varies depending on the circumstances of the events. They need to be on the spot in order to cover the story as it’s happening.

Secondly, they too often have to be exposed to dangerous situations and they have to think and act very quickly, due to the pressures of the public wanting instant news.

And, thirdly, they have to deal with many types of issues and scenarios and be able to handle overwhelming amounts of information.

In an emergency department, as the name clearly shows us, urgent and critical situations abound. The doctors who work there often have to make complex decisions with very little time to make them.

They hold the health and lives of other people in their hands, and that responsibility places a significant psychological burden on them. They also witness pain and suffering and often don’t have the tools or resources to effectively process and relieve it.

People who work in public relations, including salespeople, have to deal with all kinds of people. Some people are polite, others downright rude, and they often have to put up with people who cross the boundaries of acceptable behavior in order to achieve a sale or to protect the company’s image.

Because of this, this type of job demands a good dose of tolerance and a lot of self-control. Both these capacities are often put to the test. They also tend to have contact with large numbers of people. Thus, they’re subject to a fair amount of pressure.

Having to stay most of the day in an enclosed environment, facing the public, and dealing with all the changing traffic situations that can occur in city traffic is already a complicated issue.

If you add to that distressed passengers who want to get to places faster than is humanly possible or who treat them inconsiderately, then the pressure increases. Taxi drivers really do have to endure high stress levels.

Working with children and teenagers can be very strenuous. This is especially the case when there are high numbers of children in the classes or where they don’t have the necessary means at their disposal to grab their attention or satisfy their curiosity.

In addition to this, teachers are responsible for the well-being of the children, and this means that they have to be very careful with their actions, words, and reactions. Although teaching can be a very satisfying profession, it can also generate feelings of helplessness or worthlessness.

The most stressful jobs demand a greater effort in terms of work health and safety. Those who carry them out must be aware that they’re more likely to become ill, suffer stress, or develop fatigue-related problems. It’s vitally important that the people who work in these professions take good care of their physical and mental health.

Passion and obsession are two similar realities that are also rather different. The first corresponds to a great flow of…