A certain, tolerable level of stress is normal, even necessary, for individual development. However, if this stress reaches such a high level that you can't overcome it, you'll end up with post-traumatic stress disorder (PTSD), also known as soldier's syndrome. 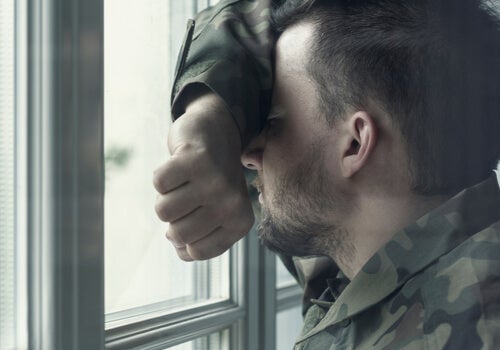 In 1980, the term post-traumatic stress disorder (PTSD) was introduced. That’s the first time it was included in the American Psychiatric Association’s diagnostic classification guide (the DSM-III). Until that point, the definitions and categories of so-called “soldier’s syndrome” were all over the map.

In the Vietnam War, the term went from “combat stress reaction” to “adulthood adjustment disorders” to “post-Vietnam syndrome”. After the Vietnam War, social pressure forced experts to redefine the concept. That’s when the term PTSD originated. Experts began to recognize it as a primary diagnostic entity in the group of anxiety disorders. In this article, we’ll talk about PTSD as soldier’s syndrome to place it in a military framework.

Definition and origin of soldier’s syndrome or PTSD

Everyone experiences stressful or traumatic situations in the course of their lives. When the stressful circumstances are of a particular nature and intensity, they can cause a sudden and total imbalance in the mental structure. At the same time, they block the individual’s adaptive and defensive abilities. In other words, the situation overwhelms them in every aspect and they can’t respond adaptively. As a result, the traumatic stress sets in.

The causes of soldier’s syndrome or PTSD are those experiences or environmental circumstances that provoke mental trauma. PTSD develops as a consequence of exposure to traumatic stressors that severely threaten the individual’s mental and physical integrity. Also, the individual’s subjective perception of fear and their personal inability to deal with said situation is relevant.

Different factors determine whether or not someone develops PTSD:

Anxiety, depression, guilt, and distress are some of the most common PTSD symptoms. The most characteristic symptoms of soldier’s syndrome can be divided into four categories:

It’s very common to relive a traumatic event over and over again. The emotional and physical sensations can be as real as the first time. Any day-to-day event can trigger flashbacks, especially if they relate to the traumatic event in any way.

Constantly reliving the traumatic event is very distracting. People with PTSD tend to avoid people and places that remind them of what happened and avoid talking about it. One way to deal with pain is to simply deny your feelings and block everything out to avoid suffering.

People with PTSD/soldier’s syndrome are hyper-aware. They’re also always on the defensive. They feel that they’re in constant danger. This is known as hyperarousal.

People with PTSD often become very negative about everything around them and themselves. They feel guilty and are incapable of positive emotions or feelings. They might become aggressive or violent. Also, they’re easily irritated, imprudent, and reckless.

PTSD in the military

Some characteristics of the military population relate to and interfere with soldier’s syndrome or PTSD. These elements also intensify the individual’s symptoms and can make clinical intervention difficult.

Treatment for PTSD in the military context is most effective when it starts immediately after the traumatic event. This helps decrease the distress and complications that can arise. One common technique is called “debriefing”, which helps them integrate and be aware of the traumatic events shared by a group.

Another important tool is psycho-education, which helps anticipate symptoms. Training psychotherapy is also a very positive tool to help prepare soldiers for what they might see in combat.

Lastly, the most important thing about psychotherapy is that it adapts to each person’s circumstances. It can be done in a group or individual setting, although the former is very effective if the group is homogenous.

EMDR Therapy and Mindfulness Help Heal PTSD
Today, we're going to talk about the effectiveness of EMDR therapy and mindfulness for healing trauma. These two techniques are a powerful therapeutic ally. Read more »
Link copied!
Interesting Articles
Psychology
If the People who Know you, Love you...Why are you Afraid?

Let's do an experiment. It would be best if you represented the results of this experiment in percentages. Sometimes too…

They say that the years fade away like smoke that escapes out an open window, drawing suggestive shapes in the…

Many of us may have a family member or friend who suffers from depression. Though it's especially painful for the person…

Psychology
Microexpressions According to Paul Ekman