The Tall Man Syndrome is a Form of Narcissism

Some people feel superior to others due to their social position, physical attributes, or level of education. This behavior defines a type of narcissism referred to as tall man (or woman) syndrome. Continue reading to find out more about it! 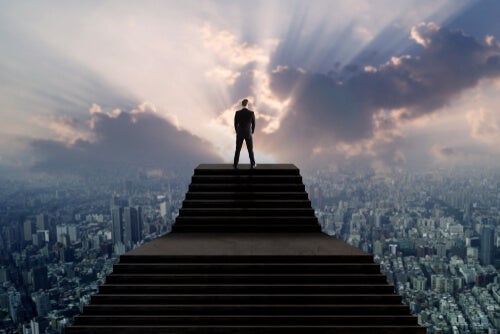 Tall man syndrome has nothing to do with height and it isn’t gender-specific either. This designation describes those people who begin to exhibit arrogant and clearly narcissistic behaviors upon reaching a certain status in a given sphere.

Does this mean that success inevitably leads to becoming selfish and haughty? The answer is: of course not. This doesn’t happen in all people, especially in those with a naturally affable, empathetic, and compassionate personality. This type of trait is usually only present in certain people. They develop an arrogant attitude after achieving a position of greater relevance.

Therefore, one could say that there was already a base component, a trend. There’s also another striking part you might’ve seen on occasion: some people can’t handle success. This is what the Ancient Greeks defined as hybris. It’s a kind of behavior in which a person can’t control their own impulses and displays excessive arrogance. They’re the hero who ends up subduing the innocent. Continue reading to find more about this concept!

“I love being superior to myself better than [to] my equals.”

What does tall man syndrome consist of?

Tall man syndrome doesn’t describe a psychological disorder. It’s true there are a lot of syndromes out there; concepts that try to label certain behaviors. There’s no attempt to pathologize anything in this abundance of definitions. In fact, it’s only a question of highlighting a type of behavior that’s common and labeling help keeping them in a sort of library.

The first time someone used this designation was in 2011. An article by Dr. Susan Heitlem, a professor at Harvard University and author of several books on clinical psychology described a type of profile she frequently encountered. It was “the tall man”, a type of narcissism that arose along with success.

Likewise, authors such as Jim Collins, a management guru, also spoke about this idea in one of his books called How The Mighty Fall: And Why Some Companies Never Give In (Good to Great). Thus, something frequently appreciated is how those organizations that manage to position themselves in a specific market end up falling by themselves due to poor management, bad leaders, and the narcissistic behavior of many of them. Here are some of the reasons, along with the characteristics that define them.

I achieved success by having “superior” qualities

A large part of the population achieves success on their own merits and they do so through effort, talent, perseverance, and, basically, their own abilities. Others achieve it by luck or with a little help from their friends. Tall man syndrome is often tied to the latter factor. These kinds of people already have a tendency toward rank-and-file arrogance. However, they attain an even more damaging form of narcissism after stepping into a position of power.

Right then, they begin to verbalize ideas such as that their position is due to superior qualities and not to luck. Only they’re worthy of that sphere of power for having their own distinctive traits for success. In the long run, they stop attending to the needs of their environment. In fact, they apply an inflexible approach in which, far from learning, innovating, or revitalizing the machinery of a company, they stagnate it instead.

Tall man syndrome – “I’m the richest, most attractive, and most powerful”

Tall man syndrome reveals itself in men and women who consider themselves superior to everyone else due to their oh-so-special attributes. In other words, this isn’t just about those business people or those leaders of an organization who brag about their job success. This psychological reality also defines those who feel superior for being more attractive, being a better athlete, being richer, being socially affluent, etc.

However, all of it comes at a cost. The kind of behavior in which a person feels superior for having a quality that others lack (in their opinion) results in a clearly narcissistic way of relating and communicating. It’s precisely at that moment when they begin to apply certain behaviors. They nurture them with their favorite mantra “I’m better than you, so I’m right”.

There are others: “What you do has no value compared with what I do”, “What you say or decide has no relevance compared to what I say or do”, etc. The cost of these dynamics is clear. They end up causing conflicts and lead to bad social and emotional relationships, harmful environments, emotional exhaustion, stress on the people around them, and so on.

The origin of the tall woman/tall man

Many people can’t handle success. Men and women who achieve a position of power at a given moment abound. However, they soon fall due to excesses, mismanagement, and narcissistic behavior that poisons their atmosphere, relationships, and business project. An actual good leader positions their organization on the top thanks to their remarkable interpersonal and business skills.

It’s impossible to coexist with some people due to the magnified vision they have of themselves. It’s easy to place the focus on their childhood and the education they received if you wonder about the origin of such behavior. There are children with Emperor syndrome who develop tall man syndrome in adulthood.

They’re those little ones whose parents deify and indulge to the extreme. These young tyrants have little to zero empathy as they operate from a throne of power. They receive attention and positive responses to their every whim. When adults raise children without marking some clear boundaries, it doesn’t take long for them to become tall. They’re narcissists, after all.

Keep this in mind and observe proper parenting guidelines in order to make society more bearable and respectful for everyone.