The Szondi test was discredited a long time ago by the scientific community and is rarely used today. It's based on the theory of the family unconscious and sought to reveal deep and potentially unsettling things about an individual's personality. 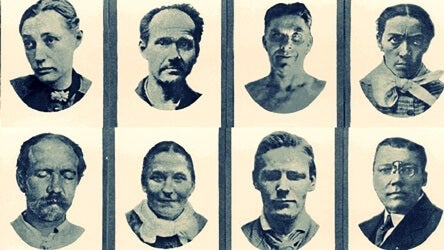 One of the most curious projective tests in the history of psychology is, without a doubt, the Szondi test. Also known as the “fate analysis test”, it was designed in 1935 to try to get information about an individual’s personality and most profound instincts. The test couldn’t have been simpler. All the patients had to do was choose one face from a group of portraits based on a series of questions.

Before we continue, it’s important to clarify that this test isn’t considered valid. After all, it was based on biased genetic predeterminism. Nevertheless, some people continue to use it in certain contexts. Some professionals who work in prisons or psychiatric hospitals find it useful. However, they only use it along with other, more credible diagnostic tests.

The idea behind the test is that many of the choices people make have to do with certain repressed thoughts and feelings. The theory says that we choose to hide these things when we’re children. With that in mind, it comes as no surprise that Sigmund Freud’s theory of instincts was the foundation for this test.

Who was Léopold Szondi?

Léopold Szondi, the test’s creator, was a well-known Hungarian psychoanalyst, as well as a psychopathologist and psychology professor. For nearly ten years, he was a professional equal to Sigmund Freud and Carl Jung. However, World War II dramatically changed his life. Szondi and his family were Jewish, and the Nazis sent them to a concentration camp.

Fortunately, the intellectual community in the United States found out what happened and decided to pay the Germans for his release. After his experience, however, Szondi wasn’t able to pick up where he left off, and he never achieved the fame of some of his contemporaries.

Nevertheless, many people still value his scientific achievements: his theory on fate analysis, fate psychology, and his personality test. There’s even an International Szondi Society, which is dedicated to studying his theories and teachings.

The Szondi test and fate psychology

The Szondi test uses photography as a diagnostic method. Test takers must choose a face based on a question. The test uses 48 cards organized into six series of eight people. It’s important to mention that all of the photographs are portraits of people who suffer from mental disorders.

Szondi believed that each patient would choose a face with an expression or facial characteristics that suggested a disorder or problem similar to their own. In other words, repressed impulses would come out when the patient made certain choices based on the therapist’s questions.

Szondi’s theory argued that patients would react to the physical (genetic) traits that they shared with the image. This phenomenon is called genotropism, which stems from Szondi’s theories of fate psychology.

From the beginning, Szondi searched for a third approach between Sigmund Freud and Carl Jung’s theories. While the first advocated for the individual unconscious and Jung for the collective unconscious, Szondi proposed a new idea: the family unconscious.

The core of this theory was based on the following:

The first step in this process, according to this approach, is the Szondi test.

Then, the therapist gives the patient a card with eight different portraits on it. The patient should answer quickly because, if they take too long, the answer loses meaning. Originally, as we mentioned above, all of the portraits were of people with mental disorders. Szondi believed that the test takers’ choices gave clues about their hidden impulses and instincts. He believed that people would choose the faces of people they unconsciously identified with.

Szondi also defined a series of so-called “drive needs” that therapists could use to measure the patient’s choices:

We should reiterate that the Szondi test was created in 1935. Thus, it’s outdated, lacks scientific validity, and is criticized for its geneticist and determinist approaches. Studies such as one from the Aix-Marseille University, for example, show that, although it was a common psychiatric test during some time, its use has steadily declined since the 80s.

That being said, it’s important to mention that, today, experts use much more practical alternatives to the Szondi test. Marketing and publicity companies use images of people with mental disorders to better measure their customers’ likes, preferences, and buying habits.

Now, these unsettling faces from the 20th century have been replaced by people doing things, colors, animals, or foods. The theory of the family unconscious has been replaced with other, simpler, non-pathological dynamics oriented towards neuromarketing.

The Forest Test and its Place in Psychoanalysis
Have you ever heard of the forest test? It's a tool used in psychoanalysis which can be quite revealing about our lives. Are you ready to enter the forest? Read more »
Link copied!
Interesting Articles
Personality Psychology
Despair Dissipates with Age