The Spotlight Effect: Making Mountains out of Molehills

People who suffer from the spotlight effect feel as if they can't have any visible defects or make mistakes because they feel like everybody's constantly judging them. 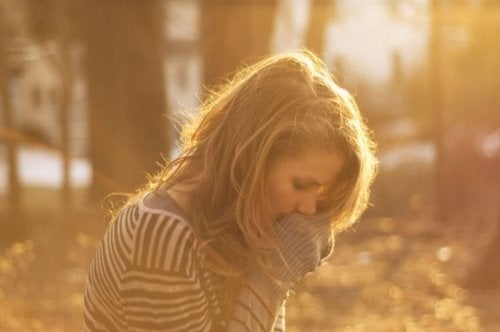 The spotlight effect is when people overestimate any of their defects or flaws, however small they may be. The victims of this phenomenon feel as if everyone’s watching them. They think others will judge their smallest mistakes. Although it’s more common in teenagers, many adults also suffer from it.

A person afflicted by the spotlight effect will be terrified of seeing a pimple on their face. They think everyone will notice that small imperfection. Likewise, they imagine others are talking behind their back, criticizing them. Two contradictory situations occur in the minds of these people. On one hand, they have very low self-esteem. On the other hand, they also feel like they’re the center of the universe.

The spotlight effect is the tendency to overestimate one’s own characteristics or personal behaviors. In particular, this happens because the person believes any of their flaws or mistakes will be very noteworthy for others. However, they don’t realize that most people don’t care about their stained shirt.

We could say that the spotlight effect is just another form of paranoia. A paranoid person feels special, different, and chosen. But it isn’t due to excessive narcissism. Rather, they feel guilty about something they’re not really aware of. Thus, they project their guilt onto others. For that reason, in their mind, it seems like everyone’s constantly judging them. At the same time, their guilt evens out with their air of superiority.

People who suffer from this effect maintain the image that they’re better than everyone else. Therefore, they become extremely dependent on other people’s opinions. On one hand, they need to capture other people’s attention in some way. However, they’re also afraid of others, because in their mind others are merciless judges.

Some scientists carried out an experiment on the spotlight effect at Cornell University. The experiment consisted of gathering a group of volunteers and asking them to choose a shirt they considered ugly. Then, they had to wear it for a day and count how many people noticed it.

After completing the first part of the experiment, the researchers asked each person how many people had noticed them in their embarrassing shirt. Likewise, they also surveyed the observers to compare their answers with the volunteers’ responses.

In the end, many of the volunteers were significantly off in calculating the number of people who had noticed them. The results showed that less than half of the reported observers had noticed the shirt.

How to Overcome the Spotlight Effect

To overcome the difficulties that reside in your unconscious, experts recommended undergoing psychological therapy. However, there are other measures you can take in the short term that many prove effective:

In addition, it’d be interesting to take a closer look at why you feel so insecure about who you are. The spotlight effect manifests in people who haven’t been able to accept themselves.

The Small Wins Theory to Boost Your Self-Esteem
The small wins theory says that life is better if you learn to simplify. The hardest problems are easier to tackle if you break them into bite-sized pieces. Read more »
Link copied!
Interesting Articles
Self-esteem
Improving Self-Esteem: How Is It Possible?

Improving self-esteem is a goal we could all adopt as our own. As we grow, we build our identity and…

Do you apologize too much? In principle, saying sorry is one of the social glues that strengthens relationships. However, apologizing too much is negative. Remember that the act of apologizing should…

Self-esteem
The Drawbacks of Being Too Modest

Being too modest is as dangerous as any other aspect taken to the extreme. The key here is “too”. Because of…

Having self-value or good self-esteem means being aware of your own resources and potential. In addition, it means knowing your…