10 Differences Between Freud and Jung 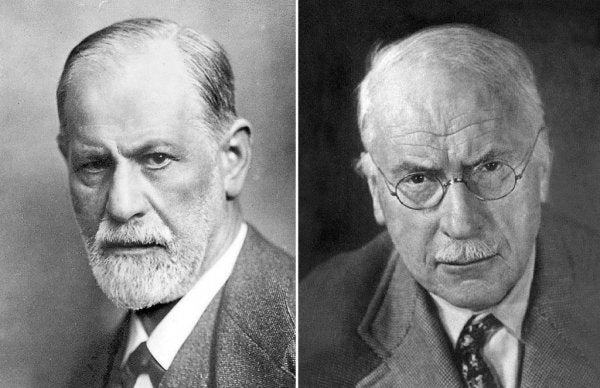 There are countless controversies — some quite heated — surrounding Sigmund Freud and Carl Gustav Jung. You can find experts that support their ideas and others who are against them, each with their own nuanced reasons. The debates get even more interesting when we look at the two of them together instead of individually.

The differences between Freud and Jung are interesting because, paradoxically, when they first started their careers, their thoughts and theories had a lot in common.

Actually, they were so similar that they were confused with each other, something that didn’t happen later on in their careers. Their differences became clearer and their brands of psychology diverged. We’d like to take a journey through the stories of these great minds… would you like to come along?

Sigmund Freud was an Austrian neurologist who began and shaped one of the oldest and most powerful areas of psychology: psychoanalysis. In addition, he’s considered by many — both supporters and critics — to be one of the most important intellectuals of the 20th century.

Because he was a neurologist, his initial interest was neurology. His ideas started here and then progressively became more psychological in nature, both in how he analyzed causes as well as the types of disorders he studied.

Carl Gustav Jung, then, was a Swiss psychiatrist, psychologist, and writer. He was a key player in the creation of psychoanalysis. He later was a founder of his own school of analytical psychology, known as Jungian psychology.

Freud’s work was interesting to Jung. Freud even publicly announced Jung would be his “successor”. However, it didn’t take long before they went their own ways due to personal and theoretical disagreements. That was how Jung was expelled from the International Psychoanalytical Association, which at one point (1910) he presided over.

Differences between Freud and Jung

Although Freud and Jung have many differences, in this article we’ll only list a few of the most important ones.

Although you may hear the term “Jungian psychoanalysis”to refer to Jung’s theories, it’s a nominative error. Jung is not considered a psychoanalyst. Actually, he himself decided to completely separate from that school and create his own.

Freud recognized Jung as the author of the term. Freud did use “complex” in his theories, like “Oedipus complex” or “castration complex.” But for Jung, the term “complex” meant emotionally charged images or concepts that behave like their own split personality. Each complex had an archetype at its center, and it was related to the concept of trauma.

Jung saw parapsychology and “psychic phenomena” as very important. But Freud was against studying such ideas and linking them to psychoanalysis; he believed doing so would distort existing theories.

For Freud, “archaic remnants” had to do with certain unconscious mental forms. He associated them with his concept called the “mnemic trace.” However, for Jung, archaic remnants were more than that. In fact, he used it to create a map of the unconscious that differed from the one psychoanalysis proposed. Jung was talking about the collective unconscious.

He would psychoanalyze his patient’s dreams, interpret myths from different cultures, and incorporate it into his research on alchemical symbols. For Jung, the collective unconscious is a part of human nature. It is made up of archetypal structures derived from humanity’s most transcendental emotional moments. He says this is where our age-old fear of the dark and our ideas of God and good and evil come from.

“The mind is like an iceberg, it floats with one-seventh of its bulk above water”.

5. Historical factors and the importance of the present

However, Jung said it worked the other way around. For him, historical factors are relative. Even when Freud didn’t disagree specifically about this issue, he did disagree generally with Jung’s focus on the present being a result of the past with respect to neurosis.

“I am not what happened to me, I am what I choose to become”.

Jung defined the concept of libido as a general life energy or vital force that would change depending on what’s most important at the time for our body’s biological evolution: food, death, sex. But Freud’s concept of libido was different. He said it was a predominantly sexual energy concentrated in different parts of the body throughout an individual’s psychosexual development.

For Freud, the psychic structure has three levels: the preconscious, the conscious, and the unconscious. Jung, on the other hand, agreed on the conscious level but he talked about two unconsciouses: the personal and the collective.

Another difference between Freud and Jung is how they understand the phenomenon of transference. Freud believed that it requires an asymmetric relationship. The therapist is like a blank slate where the patient can place — transfer — fantasies, role models, etc. to be used for analysis. It is one-way.

While Jung still thought transference was a central problem for analysis, he did not share Freud’s traditional ideas. He defines the therapeutic relationship in terms of his alchemic knowledge. He uses the metaphor of two different chemical bodies that change each other upon contact. In other words, the relationship between the patient and the psychotherapist is collaborative and two-way.

Freud used the couch as an indispensable tool for analysis, the point being to keep the analyst out of view. But Jung did his sessions face-to-face, sitting in front of the patient, no couch.

Another difference between the two was their session frequency. Carl Gustav Jung saw his patients at least two times per week in the beginning, around one hour per session. He would later move them to one session weekly for about three years. Freud, though, saw his patients six times a week, around 45 to 50 minutes for each session.

Here we only mentioned 10 differences between Freud and Jung’s methods, thoughts, and theories, but there are many more. It’s quite interesting to look at their relationship and how each left their mark on psychology. We encourage you to dive a bit deeper into their work and personalities.

Using Junglian Therapy to Find Emotional Balance
Jungian therapy was a therapy brought to us by Carl Jung in the 1970s. Up until now it hasn't been used too extensively, but it is now experiencing a resurgence. Read on and find out in what areas of our lives it can help us. Read more »
Link copied!
Interesting Articles
Psychology
Children with Emotionally Immature Parents

Children with emotionally immature parents suffer deep scars. Many children end up taking on adult responsibilities and they grow up…

Psychology
I'm Nothing But Myself When I'm Alone

In one of his most famous sonnets, Para cuando me ves tengo compuesto (For when you see me), Miguel Hernández wrote…

Psychological exhaustion weakens us both physically and mentally. It's something that arises as a result of having too much to…

Psychology
Jealousy Over the Past

That insatiable jealousy over your partner’s past… know what I’m talking about? Have you been a victim to this feeling? (on either side of the relationship) Maybe you have fallen…

Psychology
At 30, The Quality Of Friends Is Worth More Than The Quantity

A recent study by the APA (American Psychological Association) published in Psychology and Aging has shown what many of us suspected:…

Interesting Articles
Romantic Relationships
Expectations and Relationship Dissatisfaction: I Love You, But I Want More