The Negativity Bias according to Science

Humans are ruled by our negativity bias. This is because we have a tendency to be more affected by criticism than by praise. In fact, bad news affect us a lot more than good news and we even highlight negative events in our memory over positive ones. Why does this happen to us? 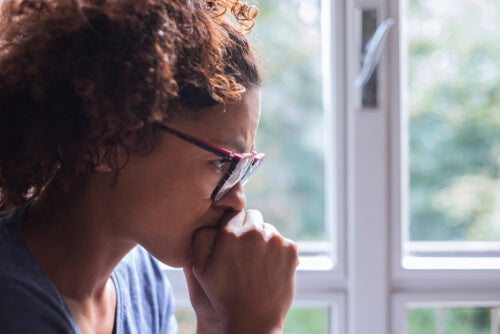 The negativity bias refers to the human tendency to think about what wasn’t good, instead of reflecting on what was. Hence, our pleasant and positive memories are overcome by silly unpleasant encounters. The value we give to all that’s negative is what we’re going to talk about today.

Negative bias explains the reasons why traumatic events and negative experiences remain longer with us and seem to affect us more than positive ones. It seems that these more or less unpleasant experiences tend to become more intense in our thoughts. Let’s get deeper into it.

The evolutionary foundation of the negativity bias

On many occasions, bad news produces much more impact than good news. And, even simple criticism may affect us much more than compliments.

In the book Buddha’s Brain, neuroscientist Rick Hanson ventures an explanation, endorsed by many other researchers, about the origin of the evolutionary nature of this negativity bias.

According to Hanson, negativity bias is a consequence of the evolution by which our ancestors learned to make intelligent decisions in high-risk situations. These kinds of decisions were the ones that helped them survive long enough to guarantee the next generation. It was all a matter of life or death.

Thus, individuals living in tune with possible dangerous events were more likely to survive. Over time, the brain structure adapted very slowly to pay more attention to negative information, rather than positive.

In studies conducted by the psychologist John Cacioppo on the neuronal processing of negativity bias, they found that the brain’s response to sensory, cognitive and negative motor stimuli causes a much greater activation than positive events. Especially in the cerebral cortex.

As a result of the above, negativity bias favors and influences us to focus on the negative around us. This even when making decisions.

It also seems to greatly influence the motivation with which we complete a task. It’s interesting that we’re more motivated by avoiding a negative experience than by a task that will provide a positive incentive.

The evolutionary approach suggests that this is just a tendency we aimed for and it’s about avoiding the damage caused by negative situations. That it’s simply a way through which our brain tries to keep us safe and protected.

How does negativity bias impacts our lives?

Even though it seems that negativity bias helped humans survive, the truth is it produces quite undesirable effects in our daily lives. We should at least be aware of them.

In addition to affecting our decision-making and the risks we’re willing to assume, this bias also seems to have a huge impact on the way we perceive other people. Because it could lead us to think and expect the worst of others in our intimate relationships.

Negativity bias has consequences as different as those that make us more likely to give more credibility to negative news than to positive ones. These types of news not only attract us more, but we give them greater validity. This, even though such news might be fake.

It also affects our values ​​and ideologies. And it seems to have a lot to do with our tendency to hold on to tradition and security in the face of ambiguous stimuli and changes we consider threatening.

As you can see, you had better reflect on your tendency for negative bias in most situations. Do take its presence into account, especially if you want to make better decisions.

Don’t Let Others Project Their Negativity on You
Who has never received any criticism? All of us have at some point been victims of people who felt envious over our job Read more »

Link copied!
Interesting Articles
Research
Which Area of the Brain is Responsible for Pessimism?

A well-known fact of human life is that memory tends to deteriorate with age. However, recent studies show that there might be a way to reverse memory loss. New techniques…