The Myth of Medea, a Sorceress in Love

The myth of Medea is one of the most beautiful in antiquity. It's about a sorceress who fully risks her destiny out of love, or out of spite, at various times throughout her life. She's a model of independence and a rather unscrupulous woman. 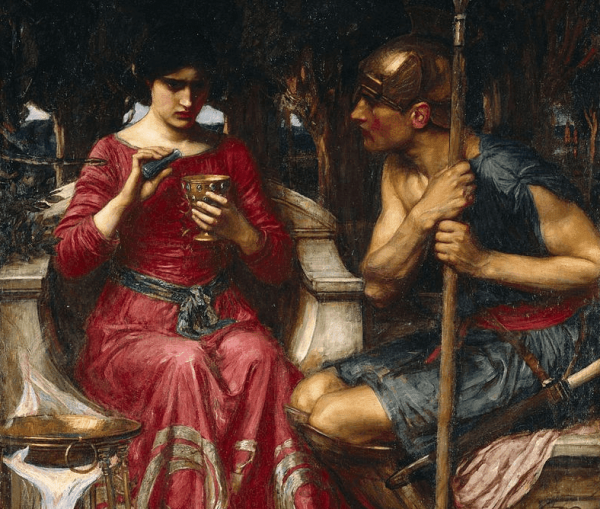 The myth of Medea is about the witch archetype; this character is an autonomous woman, ruled by her great passions and with a great capacity to make decisions. At the time when she first appeared, she represented the complete opposite of what a woman should be. It was, perhaps, for this reason, that the story aroused great interest and had a huge impact on the authors.

According to the myth of Medea, she was the granddaughter of Helios, the god of the sun. She was also the daughter of Aeëtes, the king of Colchis, the same place that held the mythical Golden Fleece. This was a winged ram with gold wool. Medea’s mother was the nymph Idyia, daughter of the Ocean.

The story says that this sorceress learned the arts of witchcraft from her aunt Circe. She had great powers and had the kind of knowledge of magic potions that allowed her to turn her enemies into animals. She could also cure diseases thanks to her knowledge of herbs and medicine.

The myth of Medea, the woman in love

The moment in which the myth of Medea comes to life is when Jason and the Argonauts arrive at Colchis, the kingdom of the sorceress’s father, in search of the Golden Fleece. The goddesses Hera and Athena protected the travelers and asked the goddess Aphrodite to help them in their task. Specifically, they requested that Medea, the king’s daughter, fall in love with Jason and support him in his goals.

Aphrodite had to convince her son Eros to do his thing. He was reluctant, but his mother promised him a gift and then agreed to shoot one of his arrows straight into the sorceress’s heart. Of course, this made her fall completely in love with Jason and she had no qualms about helping him fulfill his mission.

The king of Colchis promised Jason to give him the Golden Fleece, provided he complete some tests. The first was to plow a field with oxen that breathed flames through their jaws. Shortly afterward, and with the help of the protective goddesses, Jason and Medea met at Hecate’s sanctuary, deep in the forest. There, the hero asked for her help. He promised to marry her and take her with him to Greece, his homeland.

The myth of Medea says that the sorceress gave Jason a potion that made him invulnerable to the flames of the oxen. She also helped him defeat some soldiers who came out of nowhere. And she also put the dragon who cared for the Golden Fleece to sleep. Thus, the hero was able to fulfill all the imposed tasks.

The couple later fled on the famous ship Argo. In order to prevent her father from pursuing them, Medea killed her younger brother, Absyrtus, who was on the ship. She cut him up and threw the pieces of his body into the sea so that her father would spend some time searching for his body. Thus, she stopped the persecution.

This way, they managed to reach Yolco, Jason’s homeland. The people there received them with all sorts of celebrations. The myth of Medea says that the couple married and that the sorceress decided to rejuvenate Jason’s father. She did it out of gratitude because he had kept his promises. The daughters of Pelias, brother of Jason’s father and who had been displaced from the throne by him, wanted the sorceress to rejuvenate her father as well.

Medea tricked the young women and, instead of granting them Pelias’ rejuvenation, she killed him. Due to it, the couple was exiled to Corinth, where King Creon warmly received them. Medea and Jason lived happily there for many years and had two children. However, Jason fell in love with the king’s daughter, Glauce, and began to think of ways to get rid of his wife.

Pretending to accept Jason and Glauce’s engagement, the sorceress gave the princess a dress. According to the myth of Medea, it lit up on fire when the young woman put it on. Then, the fire spread to the king and to his entire palace. Later, the witch killed her children and fled to Athens, where she was received by King Aegeus, with whom she married and had a son named Medus.

Years later, she intrigued so that Theseus, son of Aegeus, couldn’t occupy the throne. Thus, his father would grant it to Medo instead. The king found out and she had to flee in a magic cloud. Thus, she returned to Colchis, where the people there forgave her. The myth of Medea says that the sorceress is immortal and still inhabits the Elysian Fields.