The Myth of Apollo, the God of Prophecy

The myth of Apollo was incredibly important in ancient times. It talks about a god who was both an artist and a ruthless warrior. 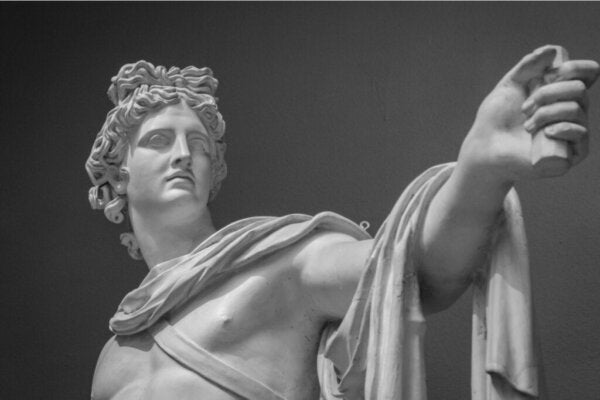 The myth of Apollo is about the most revered god in Greek antiquity, after Zeus. He was very important, so much so that his cult survived covertly until the Middle Ages. In fact, as of today, he’s known to have followers who still invoke him.

The importance of the myth of Apollo comes from the great powers that his supreme being had. Those around him saw him as the god of the arts, of prophecy, giver of the light of truth, ruler of plagues, epidemics, and sudden death, as well as of healing and protection against evil forces.

Likewise, Apollo rules beauty, harmony, balance, and perfection. He was the initiator of maturity in young people, and he also was the protector of shepherds, sailors, and archers. Additionally, he was the ultimate lord of the bow and arrow. Lastly, he was the god of music and poetry, head of the muses, and patron of the Oracle of Delphi.

The origin of the myth of Apollo

According to the myth of Apollo, this god was the son of Zeus, the highest authority on Olympus, and of Leto, a titan. At first, Zeus felt interested in Leto’s sister, Asteria, and tried to take her by force. However, she was frightened and, as a result, turned into a quail to escape his siege. Nonetheless, he continued to harass her, which led her to throw herself into the sea and turned into the island of Ortigia.

After that, the greatest Olympian god fixed his eyes on Leto, who felt the same way as him. She became pregnant, but Hera, Zeus’ legitimate wife, found out about the adventure and began a fierce pursuit against Leto. Therefore, Hera asked her daughter Eileithyia, goddess of childbirth, to prevent the birth. As a consequence, Leto was in horrible pain for nine days.

However, the gods took pity on the titan. Leto was expecting twins, so the gods allowed the girl, Artemis, to be born and quickly become an adult so that she could help her mother with the delivery of her brother, Apollo. Leto’s suffering impressed Artemis to the point that she decided to remain a virgin forever.

Apollo, a fantastic being

Leto’s siege didn’t end with Apollo’s birth, though. Hera was still furious at the betrayal, so she sent the Python snake to kill the family. However, the gods once again felt compassion for Leto’s fate and got Apollo to grow up in just four days and kill the monster.

With a thousand arrows, Apollo assassinated Python, the sacred serpent. Nonetheless, as it was a divine animal, he had to be punished for killing it. Then, the Oracle of Delphi was built where the monster died. Apollo became the patron of that place, where he’d later whisper all kinds of predictions in the ears of the Pythias or fortune-tellers.

The myth of Apollo tells that both he and his sister protected their mother until the end of time since Hera never stopped pursuing her. For one, they killed the giant Titius, who tried to rape her multiple times. Secondly, they killed Niobe’s 14 sons, who made fun of her repeatedly.

The myth of Apollo tells that this god had numerous offspring, but he was unlucky in love. He became interested in Cassandra, to whom he had given a prophetic gift, but she rejected it. Then, he fell in love with Daphne, because of an arrow from Cupid, but she didn’t feel the same way so she turned her into a tree.

Now, this myth narrates several episodes that this god took place in. Many of them were acts of violence. One of the most prominent happened when Zeus ordered the Cyclopes to kill Asclepius, one of Apollo’s sons. As revenge, the god of the arts killed the Cyclops and was consequently punished for that. Zeus then sent him to the mortal world, where he had to live like them and experience their suffering.

It’s worth noting that Apollo was a great lyre player and participated in the Trojan War. There, he fought alongside the Trojans and helped Paris kill Achilles, as he had killed Apollo’s sons Hector and Troilus. The myth of Apollo then passed to Roman mythology, where he was one of the most respected and admired gods.

The Myth of the Muses: A Source of Creative Inspiration
The myth of the muses is one of the oldest. As of now, these divine beings continue to be a source of inspiration for creators of different fields, Read more »

The computer screen metaphor shows just how much your thoughts can influence you, to the point that they might even make you lose sight of your goals. It uses a simple story…

Culture
The Iceberg Theory and Our Decisions

Hemingway's Iceberg Theory has been applied throughout history to different areas from literature to human resources, and we present to you…