The Myth of the Muses: A Source of Creative Inspiration

The myth of the muses is incredibly known in the West. However, there are very few stories where these divinities have real prominence. Despite this, they were fundamental for the Greeks since it was them who gave them creative inspiration. 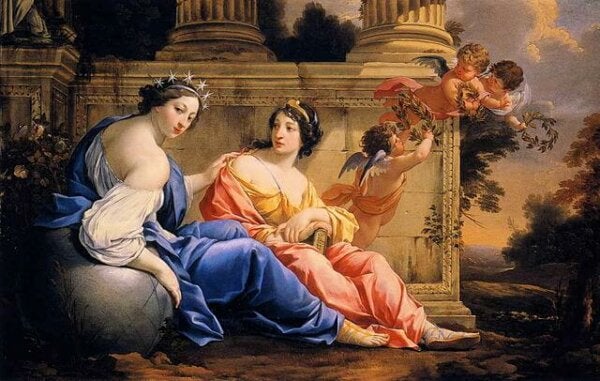 The myth of the muses is one of the oldest. To many, these divine beings continue to be a source of inspiration in different fields, such as arts and sciences. In fact, the word music comes from its name, as well as the word museum.

According to the different versions of the myth of the muses, they were the natural companions of Apollo, the god of music and the arts. He had romances with all the muses but at different times. This brought a huge consequence: many children.

The myth of the muses says that they were lively and festive young women who descended to Earth to whisper creative ideas in the ears of mortals. Whenever mortals listened to muses’ advice, they were then capable of producing wonderful and admirable pieces of work. However, those who never created anything.

The myth of the muses: the origins

The myth of the muses says that they were daughters of Zeus, the god of Olympus, and Mnemosyne, a titanite who represented memory. Now, the latter was the daughter of Gea, mother earth, and Uranus, who represented heaven. Some say that Mnemosyne and Zeus were together for nine nights and, for each night, a muse was born.

Mythological stories tell that, in the underworld, there was a river called Mnemosyne, which was next to another called Lete. Most mortals were invited to drink from the River Lete before reincarnating into a new being. The reason for this was that the waters of that river made them forget their previous lives and start again.

On the other hand, the myth of the muses tells that only a select few were invited to drink from the river Mnemosyne. These could remember the previous lives and became visionaries and prophets in their next incarnation.

Now, there are stories that speak of many different muses. However, classical history says that there were nine muses and that each one was in charge of some field of knowledge or artistic creation. According to the myth, if a creator was visited by the right muse, they would have sudden and wonderful revelations to complete their work. Here are the nine classical muses:

The presence of the muses

Although the myth of the muses was very important to the Greeks, these beings didn’t actually appear frequently in the stories of the gods. When they did, though, there were just secondary characters. Despite this, all the protagonists found inspiration in them for everything they had to do.

Some say that King Piero of Pieria had nine daughters who had great gifts for singing. Their art was so beautiful that they decided to travel where the muses lived and challenge them. Of course, the muses accepted.

The Myth of Charon, Ferryman of the Underworld
The myth of Charon is about one of the most enigmatic characters in Greek mythology: the ferryman of the underworld. His mission was to transport souls. Read more »