The Myth of Hera, The Matron Goddess of Mount Olympus

The myth of Hera speaks of a proud and vindictive woman, who was well known for her jealous character. There's one myth that demonstrates the true nature of the matron of Mount Olympus. 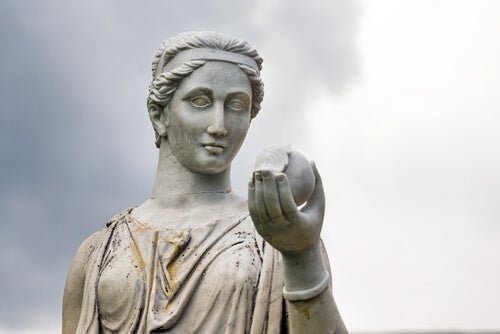 The myth of Hera gives life to one of the most classical, yet flawed facets of the female character, as seen by Greek society. She was a matronly figure, constantly plagued by feelings of jealousy and never missing an opportunity to take revenge on her enemies. It was the systematic infidelity of her husband, Zeus, that constantly forced her back into this role.

For the Greeks, the myth of Hera represented the archetype of the typical woman. She was the goddess of marriage and family life and defended these sacred institutions at any cost. She was the most important female divinity on Mount Olympus and, one way or another, she almost always managed to get what she wanted.

One of the most striking things about the myth of Hera is the fact that, every time Zeus was unfaithful to her, she made sure to get her revenge. However, the object of her anger was almost never her husband. Instead, she focused her rage on Zeus’ lovers, and the children he had with them, despite the fact that Zeus often took his lovers by trickery or force.

“Marriage is the chief cause of divorce.”

The myth of Hera – origins

Hera was the daughter of Cronus and Rhea. Although she later became his wife, this also meant that she was actually Zeus’ sister. Like all Cronus’ children, Hera was swallowed by her father shortly after her birth, after an oracle predicted that one of his offspring would overthrow him. Zeus was spared this fate after his mother devised a plan to save him, and later succeeded in freeing his siblings, including Hera.

As the story goes, Zeus fell deeply in love with Hera. After she refused his advances, he transformed into a cuckoo to get close to her, before taking her by force. Their wedding was a lavish affair, held in the Garden of the Hesperides. The two had several children together, including Ares, the god of war; Hebe, the goddess of youth; Ilithyia, the goddess of childbirth and midwifery; and Hephaestus, the blacksmith of the gods.

Although Hera is the goddess of marriage and family, she wasn’t portrayed as a good mother. For example, she rejected her son, Hephaestus, because he was ugly, banishing him from Mount Olympus. He got his revenge by making her a magical throne. When she sat down on it, she was unable to stand up again. The spell ended when Hephaestus took Aphrodite as his wife.

Renowned Greek hero Heracles (better known as Hercules) was the result of one of Zeus’ many affairs. As a result, Hera loathed him and constantly sought ways to destroy him. His mother, Alcmene, named her son Heracles (meaning, “the glory of Hera”) in an attempt to avoid the goddess’ wrath. However, this did nothing to calm the fury of the matron of Olympus.

As one story goes, Zeus tricked Hera into nursing the baby Heracles, so that his child could drink the milk of the gods. When Hera discovered his deception, she threw the child from her, causing a spurt of milk to spray out towards the heavens. Thus, the Milky Way was born.

Years later, Hera decided to punish Heracles with the infamous “Twelve Labors of Heracles”. When he completed them, she continued to persecute him for the rest of his life. However, Zeus and many other gods did their best to protect the hero throughout the tasks set for him by Hera, thus thwarting the queen’s plans.

A proud and arrogant goddess

The many myths surrounding Hera show that the goddess not only acted out of jealousy but also out of pride. It’s said that she blinded the prophet Tiresias when he took her husband’s side against her in an argument. She was also one of the main instigators behind the famous Trojan War.

On one occasion, she also tried to lead a coup against Mount Olympus. She met with Poseidon, Apollo, and Athena in secret, and the four plotted to overthrow Zeus, who was blissfully unaware of their plans. While he slept, they chained him to his bed and stole the thunderbolt that gave him his power. Then, they began to discuss who would be the new ruler of the gods on Mount Olympus.

While the heated discussion continued, unnoticed, Briareus, a hundred-handed giant, came upon the scene. He freed Zeus, who regained control of Mount Olympus and punished the conspirators severely. They begged for his forgiveness and swore eternal allegiance to him. Despite the many infidelities and great disloyalty between them, the marriage between Hera and Zeus never ended.

The Feminine Archetypes and Transformative Anger
Archetypes represent different roles that are dreamlike and universal. In this article, we're going to discuss feminine archetypes. Read more »

Interesting Articles
Cinema, Television, and Psychology
Seven of the Best Movies About Depression