According to Science, Luck DOES Exist

Crossing your fingers and knocking on wood don’t work. If you want to be luckier, science has discovered how to do it. Luck is a question of attitude: what are you willing to do for the day to smile upon you? 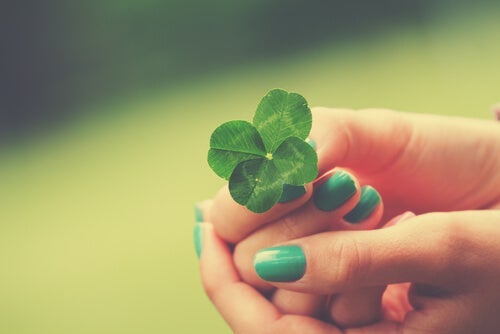 Amulets, energy rocks, four-leaf clovers, knocking on wood, colored candles, crossing your fingers… do any of these things actually bring you luck? And what about walking under a ladder, the number 13, a black cat crossing your path… do these things bring you bad luck? The answer is no. But watch out: science seems to have discovered how to really attract luck.

Richard Wiseman, professor at the University of Hertfordshire in the United Kingdom, conducted research on the following question: how is it possible that some people are in the right place at the right time for positive things to happen while others seem to have a talent for missing opportunities?

Through his research, Wiseman arrived at the following conclusion: a big part of fortune (or its absence) has to do with your attitude. In his words, “Most unlucky people simply aren’t open to what’s around them”.

According to Wiseman, there are four main keys to attracting luck (and here, let’s make a distinction between luck and randomness: randomness would be, for example, winning the lottery. The only thing you have to do is buy a ticket). Luck is a much broader concept that depends on you more than randomness.

It’s logical enough, right? If you stay cooped up in your house, how many exciting things and how many opportunities to change your life can you really get? Chances are, not many.

Richard assures that “Lucky people act on the opportunities they find in life. They try, they begin an endless number of projects, and they base their learning on interactions. This is in contrast to “unlucky” people who suffer from paralysis from analysis”.

According to Wiseman, certain types of personalities attract more luck since they tend to create scenarios that maximize their opportunities. For example, extroverted people tend to be luckier, since they spend more time with others. This is because we live in a society in which the majority of job posts are given to those that people hiring know. Thus, they’ll have more opportunities to get a good job.

On the other hand, anxious people will have fewer opportunities to realize what’s going on around them. As a result, an opportunity will really have to stand out for them to notice it. This scientific experiment shows that if you resist something new, you probably won’t have too many opportunities when things change. Thus, luck comes in when there’s uncertainty.

“Every day is a new day. It’s better to be lucky. But I would rather be exact. Then, when luck comes, you’re ready.”

Listen to your gut

Lucky people act on their intuitions in many areas of their lives. Almost 90% of lucky people said that they trust their intuition when it comes to personal relationships and almost 80% assured that it played a vital role in their career and their financial decisions.

And intuition isn’t magic. Research has demonstrated various occasions in which it’s perfectly valid. In fact, practicing meditation and, when relaxed, repeating a word or phrase in order to clear your mind stimulates your intuition.

“What seems like intuition is really experience in that area, a pattern that the body and the brain somehow already detected but you haven’t consciously seen. People with bad luck often don’t follow their intuition, because they don’t know where it’s from and feel anxious about it and the decision they should make,” explains Wiseman.

Simply put, you need to be optimistic. You’re more likely to try new things, take advantage of opportunities, and find success if you believe that everything will turn out all right. The magic is that, when you believe that things will go well, you’ll persevere. And when you’re resistant, you’ll have fewer possibilities of things going your way.

And even though it sounds naive, while pessimists see the world more accurately, optimists are luckier because their “deliriousness” and “self-delusion” push them toward new opportunities.

Whether it’s through amulets or just a lot of optimism, what’s certain is that you can boost your own self-confidence, which helps build a life full of beautiful coincidences.

So being a dreamer can help you, because the excess confidence boosts productivity, “distorts” your perspective in a positive way, reduces stress, and increases your tolerance to pain. Also, it improves your teamwork skills. But what happens when things go bad anyway? What should you do when you’re doing everything right but bad luck still slaps you in the face?

Fortunate people aren’t always lucky, but they deal with adversity differently than those who attract bad luck. They see the positive side of every situation. This is especially true because they’re convinced that any fall along the way will bring something better in the long run. So consequently, they take constructive measures to avoid more bad luck in the future. Therefore, in the face of disappointment, don’t just quit the chance at a new future or stay in bed because it won’t help anything.

“When things get difficult, we have two options: give up or keep going. Fortunate people are resistant. I remember talking to someone who had fallen down the stairs and broken their leg. I said to him, “I bet you don’t feel so lucky now”. However, he said that, on his last visit to the hospital, he met a nurse and they fell in love. Now they’re happily married. He would say, “It’s the best thing that’s ever happened to me””, commented Wiseman.

According to him, only 10% of your life is random and 90% is how you define the circumstances you face. And that’s good news. If you want to be luckier, you have to start with yourself and imagine a kinder world.

Keys to Getting Out of a Bad Luck Streak
What we call a back luck streak usually begins with a loss or a particularly difficult problem to solve. Is it possible to get out of that situation? Read more »
Link copied!
Interesting Articles
Healthy Habits
Why Breathing Techniques Don't Always Work

Many people are often overwhelmed by anxious thoughts that hinder their ability to concentrate. Visualization techniques, also called guided imagery,…

Healthy Habits
Your Brain Will Thank You for Eating Healthy

The greatest link between your body and the food you eat is not your digestive system, but your brain. Your diet…

To eat mindfully, you have to examine your eating habits. It's also important to control your eating-related thoughts and emotions. Following a smart diet will allow you to better enjoy…

Most of us are aware of how important patience is. But there's a big difference between wanting to be patient and…