The Myth of Aphrodite and Ares

The myth of Aphrodite and Ares is very interesting for various reasons. First of all, it tells about a theme that's recurrent in Greek mythology: the association between beauty and war. These two mythological gods enshrine that association. 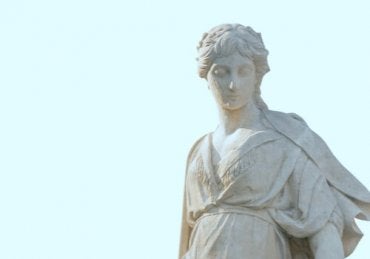 The myth of Aphrodite and Ares is one of the most interesting in Greek mythology. Let’s start off by saying that Aphrodite was the goddess of beauty and sexual love. She emerged from the sea and was more beautiful than any other creature. Gods, mortals, or anyone else who saw her were enchanted by her beauty and she knew it. Actually, that’s part of the reason why she was so vain.

Hephaestus was lame and hunchbacked. He had an unpleasant look. Given the humiliating rejection he received from his own mother, he decided to take revenge. He decided to build a magical throne in his workshop and got Hera to sit in it. Without realizing it, she was stuck and unable to move.

Hera began pleading with Hephaestus to free her. Then, he put only one condition to do so: that the gods would give him Aphrodite as a wife. Consequently, Zeus granted his wish. The myth of Aphrodite and Ares tells that the goddess of beauty wasn’t happy about this situation. She hated Hephaestus because he wasn’t beautiful like her.

Hephaestus was tirelessly trying to gain Aphrodite’s affection. He designed beautiful jewelry for her in his workshop. However, she had no interest in the god of fire. On the contrary, whenever she had the chance, she was unfaithful to him by being with other gods and even mortals.

On the other hand, there was Ares, the god of war, violence, male virility, and defender of the weak. He was also the son of Hera and Zeus. Unlike Hephaestus, he was very good looking. He also had a weakness for goddesses and women. He never bothered to conquer them, he simply made them his own.

The myth of Aphrodite and Ares

According to the myth of Aphrodite and Ares, the god of war fell madly in love when he met the goddess of beauty. Unlike what he did with his other lovers, he decided to win her over. He bought her gifts and complimented her constantly to gain her love. The two spent a lot of time together until Aphrodite fully reciprocated.

Hephaestus, her husband, spent every night in his workshop. The two lovers took advantage of this situation to love each other until dawn. Ares was always accompanied by a young man named Alectryon, whose duty was to watch the door. He did this in order to let them know when Helios, the Sun, appeared on the horizon. Helios saw everything. They had to keep their romance a secret, so this was truly necessary.

For the Greeks, any god or goddess could have all kinds of love affairs with whoever they wanted. What wasn’t allowed was to have only one lover and maintain it. In other words, formal infidelity. The relationship between Aphrodite and Ares was just that.

Everything was going well. However, one day, Alectryon, tired of such exhausting daily routine, fell asleep while watching. Of course, he wasn’t able to tell Aphrodite and Ares that Helios had come out. The latter saw the lovers among the same sheets in which Aphrodite slept with Hephaestus. Full of indignation, he sought the god of fire and told him everything.

The myth of Aphrodite and Ares tells that Hephaestus felt hurt as never before. As usual, he only thought of revenge. To do this, he designed a fabulous net made of gold threads. They were so thin that they weren’t visible, but at the same time, they were extremely resistant. He proceeded to leave the net of gold threads on the bed. Then, he told Aphrodite that he was going on a trip.

Ares, who was always aware of Hephaestus’ plans, took the opportunity and immediately went to see Aphrodite. While they were being intimate, the web of gold threads fell on them and caught them. Immediately, Hephaestus was present and summoned all the gods to be present. They laughed so hard at the situation that their laugh seemed eternal.

After this happened, the lovers were released and each of them had to go their separate ways. Ares punished Alectryon by turning him into a rooster and making him sing every time the Sun appeared. The god of romantic love, Eros, was born from the love of these two. Although Ares and Aphrodite couldn’t see each other again, they broke the rule: they had seven more children.