The Body Language of a Man in Love 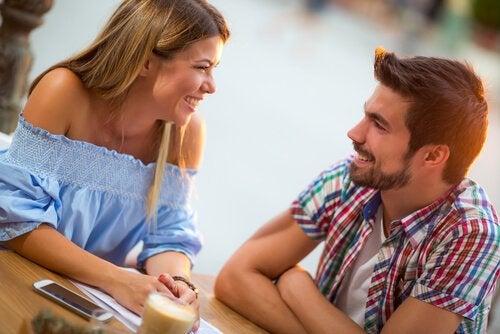 We all know that the average man has a hard time expressing his true feelings. Although this isn’t as pronounced as it was decades ago, there are still many men out there who can’t seem to connect with their emotional language. This is one of the reasons why body language is so important: it reveals what the other person isn’t capable of expressing with words.

We’re always communicating with others. We sometimes do it with words, and other times we find other ways to express ourselves. The truth is that our emotional language is sometimes capable of giving out more information about ourselves than our own words. In this sense, we’ll be describing the typical body language of a man in love in this article.

Below, we describe some body language signs of a man in love.

“The most important thing in communication is hearing what isn’t said.”

When both men and women are in love, they tend to show a genuine glare in their eyes. It’s normal for our eyes to shine when we see something we like. We focus only on what we’re interested in, causing the tear glands to be more stimulated than usual. This explains the singular brightness of the eyes in these situations.

This isn’t the only thing worth mentioning, though. One of the most revealing elements in the body language of a man in love is their fixed gaze. This gaze is the one that follows you wherever you go and the one that looks for you in a crowd. It’s the type of gaze that doesn’t go anywhere else as long as you’re there.

The face is also part of the body language

In addition to their gaze, there are other facial gestures that can reveal a man’s interest. For example, raising their eyebrows. If he arches his eyebrows a little bit when he’s with you, he’s probably interested in you.

Same goes for his smile. Love makes us keep a smile on our face all day long. This smile is basically an expression of how good we feel when we’re with the other person.

It’s also common for a man in love to imitate the facial gestures of the woman they’re attracted to. They do this without even realizing it! He imitates what he admires. He won’t notice he’s copying your expressions because he’s only focused on trying to relate to you.

Other gestures that may give away his true feelings

When a man feels attracted to you, he’ll show various unconscious gestures related to his personal appearance. For example, he’ll start touching his hair. In addition, he may fix his tie, jacket, or any other article of clothing once you walk in the room. It’s a way to prepare himself so that you find him attractive as well.

Another very frequent gesture is resting his hand on the lower part of your back as if he were driving you. A lot of people may consider this gesture old-fashioned and possessive. However, this is a very masculine expression that gives away a man’s true feelings.

In addition, you’ll notice him leaning towards you when he’s talking to you. If he’s standing, especially at the moment you meet, he’ll pull out his chest and stand up straight. This is a position of empowerment. He’s preparing to go after what he wants. For example, if the two of you are having dinner, he’ll start playing with the napkins or the cutlery in the brief periods when he isn’t looking at you.

In many cases, the body language of a man in love is just like the one we’ve described in this article. It reveals attraction, admiration, and interest. You know a man truly loves you when he listens to you carefully, supports you, and is willing to pay attention to your desires and needs.

“The earliest language was body language and, since this language is the language of questions, if we limit the questions, and if we only pay attention to or place values on spoken or written language, then we are ruling out a large part of human language.”

What Your Body Language Is Saying
Knowing a little about body language can help unmask someone who is lying to us, help us get what we want, or help us avoid embarrassing ourselves. Read more »
Link copied!
Interesting Articles
Literature and Psychology
Julio Cortázar: The Life of an Argentinian Intellectual

Culture
The Origin of Death According to Japanese Mythology

The origin of death according to Japanese mythology is found in a curious legend about the creation of Japan. Despite…