"Society expects us to be nurturers, perfect mothers, wives, and companions. Women need more though, we have the right to fight for our dreams." Glenn Close's message at the Golden Globes remains unforgettable. 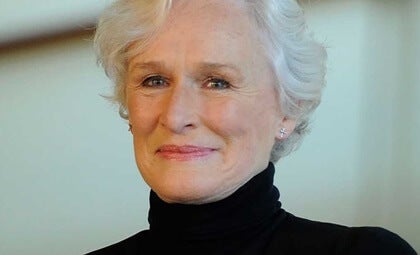 “When my mother turned 80, she told me she didn’t think she had achieved anything in life.” This was one of the most emotional and resounding phrases Glenn Close shared with her fans last January when she won the Golden Globe for the film The Wife. It was a deep reflection on motherhood and the need to reach personal goals.

You could say that this actress is one of the most admired by the masses as she often portrays memorable women.

For example, her role in Fatal Attraction is terrifying and fascinating. That eagerness to kill Michael Douglas’ character, who was a married man she had a relationship with and who wouldn’t leave his wife for her, is now part of the history of cinema.

She was also unforgettable in The World According to Garp, one of her first roles — her character is a strong feminist. People also loved her in Albert Nobbs, where her character dressed up as a man. Who can forget her performance as Cruella de Vil or her roles in The Big Chill (1984) or Jagged Edge (1985)?

Glenn Close assumes any character with passion, be it a drama, comedy, adventure, science fiction, or a thriller. She characterizes each one of her roles from the depth of her emotions. Her messages certainly stand out, like the one she gave on the night of January 7.

A good wife is a woman hidden behind her man

The Wife begins by introducing the audience to a lively character with enormous potential. Glenn Close’s character is a youthful portrait of an ambitious and talented woman living on the East Coast who aspires to be a writer.

However, conflict and contradiction appeared, and also the beginning of a personal catastrophe at a certain point. She fell in love with a young man who also wanted to be a writer. Then, when he asked for her opinion about his first manuscript, she told him what she thought: that it wasn’t good.

His reaction was violent and unexpected. He didn’t try to kill her. Instead, he continuously ignored, belittled, and underestimated her. Not only him but her community at large. Joan Castleman gradually became her husband’s shadow. She became the warm, discreet figure who walked behind the illustrious writer Joseph Castleman (Jonathan Pryce).

No one pronounced her name well, in fact, there’s not even a need to do so because she’s just The Wife. An accessory figure next to a Nobel Prize in Literature nominee.

“My daughter Annie who laid the foundation of this character, I love you my darling. Thank you so much.”

Glenn Close and her feminist discourse

The Wife took about 14 years to make but it took Glenn Close only a few minutes to get the audience and everyone connected with the significance of her role and personal story.

She spoke about her mother when she received the Golden Globe. Then, she said the following:

“I’m thinking of my mom who really sublimated herself to my father her whole life. And in her 80s, she said to me, “I feel I haven’t accomplished anything.” And it was so not right. And I feel what I’ve learned through this whole experience is that — you know, women, we’re nurturers, that’s what’s expected of us, we have our children, we have our husbands if we’re lucky enough, and our partners, whoever. But we have to find personal fulfillment. We have to … follow our dreams. We have to say: I can do that, and I should be allowed to do that.”

Glenn Close’s speech can be reflected on in many different ways. People often forget that mothers are more than just a term or a label; their status as women, as people who long to fulfill their own dreams, is still there. Latent but often silenced.

Somehow, people forget that mothers have a skin and a heart that nourishes and offers affection but need it back. This is because mothers, wives, companions, are above all people who continue to claim their space for development, creation, autonomy, and personal fulfillment.

Mothers have the right, like everyone else, to move beyond their own family. Achieving it, combining it, and reaching it is a challenge, no doubt. However, as Glenn Close points out in her speech, it’s a woman’s duty to fight for her own dreams and materialize them.

Few things are as sad as arriving at a moment in your existence and feeling you haven’t done anything with your life. That you’re an invisible being beyond your family life. A mere specter of hidden and untapped potentials or silenced voices like Joan Castleman, the protagonist of The Wife.

Think about it and work on your goals whether you’re a man or a woman. Try to reach your goals. That way, you’ll be able to say your life was worthwhile.

Children of Depressed Mothers
The children of depressed mothers have certain traits that distinguish them from other children. Read more about this in our article! Read more »
Link copied!
Interesting Articles
Cinema, Television, and Psychology
18 Musical Movies for all Tastes