The Linguistic Theory of Noam Chomsky

The linguistic theory of Noam Chomsky explains how a curious feature of generative grammar is that it's mostly aimed at ideal speaker-listeners. That is, people who command a language and seldom make mistakes. 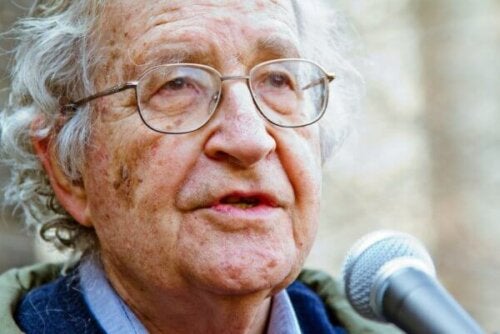 Noam Chomsky’s linguistic theory is one of the most important regarding human language. The world knows it as either generative grammar or biolinguistics. It demonstrates that an innate mental structure makes it possible to understand and produce any utterance in any natural human language. Furthermore, it makes it possible for the process of acquiring and mastering language to require little processing in the brain to get going. Also, it develops almost automatically.

Noam Chomsky’s linguistics theory is controversial despite its importance. Thus, many scholars don’t believe it’s a good explanation of language acquisition and language functioning. This criticism is due to two factors. The first might be the way in which Chomsky explains the emergence of concepts in the mind. Moreover, the second is that Chomsky believes that certain syntactic principles are universal. Known in all languages, that is.

Chomsky’s first distinction in generative grammar is that between linguistic competence and performance. According to the author, competence corresponds to the capacity of an ideal speaker-listener to associate sounds and meanings according to unconscious automatic rules.

Furthermore, linguistic performance refers to the interpretation and comprehension of sentences in accordance with competence but also regulated by extra-linguistic principles. Memory constraints or beliefs, for example.

A significant part of generative grammar is mostly aimed at ideal speaker-listeners. In other words, people who supposedly know the language perfectly and who never make mistakes. This is because they aren’t affected by distractions or context constraints.

In his book Syntactic Structures, Chomsky proposes the existence of a mental device. One by which any sentence of any natural language can happen by connecting meanings and sounds. This is the language acquisition device and it has three components: syntactic, semantic, and phonological.

This component has a base and a transformational component.

The semantic component consists of a non-specific set of semantic rules that assign meanings to the deep structure. The goal is to convert a deep structure into a meaningful representation.

The phonological component of the linguistic theory

This component forms by a set of morphophonemic rules that govern the conversion of morphemes into phonemes. Thus, to sum it up, they regulate the pronunciation of words and utterances.

Furthermore, Chomsky’s linguistic theory states that all the rules that allow the comprehension and production of language are logical and unconscious. These rules would determine, for example, that people should pronounce “ig” as [ay] in English when it precedes a nasal word ending, as in the case of sign [sayn].

Chomsky proposed his theory to explain how people acquire, understand, and produce spoken language. This theory postulates that all human beings acquire maternal speech automatically. The lack of realism of this theory is what people criticize the most, which is why it’s controversial.