The Last Laugh - Stereotypes about Aging

This brilliant film addresses preconceived notions about what is or isn't proper, appropriate, healthy, or recommended for people in the last stages of their lives. 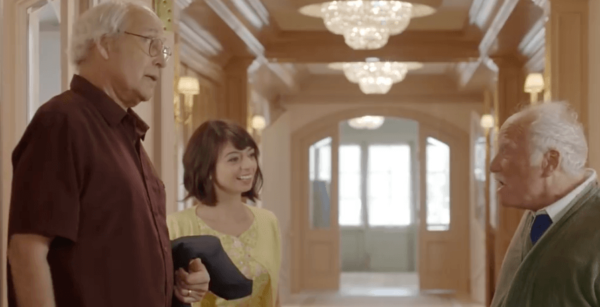 Last year, Netflix premiered an original movie that challenges clichés and stereotypes about aging. With The Last Laugh, director Greg Pritikin, with Hollywood greats Chevy Chase and Richard Dreyfuss, gives us a comic road movie that invites viewers to reflect on preconceived notions and prejudices about aging.

The idea isn’t new. A while back, the movie industry started to make the occasional comedy featuring two, three, or more aging stars. Space Cowboys is an example.

Seeing favorite beloved actresses and actors age makes quite an impact on audiences. These are stars that played a part in your youth, and seeing them grow old reminds you of your own mortality. You watched them on the screen when they were young, beautiful, and fit. Maybe you even fell in love with a few of them.

The Last Laugh is another example of this kind of film, and it makes you think. What are the rules about growing old? What are you supposed to do or not do after a certain age? You don’t have to be a famous Hollywood actor to ask yourself these questions. It’ll happen to all of us someday.

What we do know is that there are a lot of conventions about what’s appropriate and healthy behavior for older adults. Some people feel completely lost trying to fit into those molds and trying to find the meaning that they seem to have lost along the way.

In The Last Laugh, Chevy Chase plays a retired man, Al Hart. Before he retired, Hart was a talent manager for comedians, a job he loved. His family, concerned about his advanced age, insisted that he move to a retirement community.

There, he reunites with his very first client, Buddy Green (played by Richard Dreyfuss). Green was a promising young comic when Al represented him, but he abandoned his potentially successful entertainment career to pursue a more “serious” job and raise a family.

The two spend their time at the retirement community bored out of their minds by the second-hand shows, card games, old stories, and resignation. Al just can’t get used to it, so he ends up convincing Buddy to dust off his long-forgotten dream of being a stand-up comedian, and take to the road.

The two decide to drive to New York without telling their families. Their fellow retirees think they’ve gone insane. Al, as Buddy’s agent, gets him gigs all along the way, in the cities and towns they pass on the way to the Big Apple. Their ultimate goal? A big stand-up comedy show that’s broadcast on TV.

Different studies have identified the stereotypes about aging that the elderly often internalize and start to believe about themselves. Levy, Slade, Kunkle, and Klas (2002) described this process. Starting in childhood, we learn about age-related stereotypes, which leads to developing expectations about our own aging process that we don’t usually question.

As you age and reach different stages of life, you tend to unconsciously apply the stereotypes that are already internalized to yourself and others. As a result, you modify your perceptions about age and adjust them to the corresponding stereotype. Without realizing it, you make behavioral changes that have physical and psychological consequences.

You create new behavior and leave other kinds of behaviors behind. You try to follow the expectations about what’s “normal” and what you “should” do. That’s how stereotypes take shape. When someone doesn’t fit into the stereotype about how their age group “should” act, it seems strange and inappropriate. Unconventional behaviors often trigger rejection. This is the case for adults over 65 who have frequent sex, which is behavior that we usually associate with other age groups.

Cuddy, Norton, and Fiske (2005) found that people tend to attribute fewer competencies to older people, and more traits of cordiality. In other words, our stereotype of old age involves fewer abilities and more sympathies. They replicated the study from the United States in six other countries with distinct cultures and got almost the same results.

They showed that people with more negative perceptions of their own aging process didn’t live as long as those with more positive perceptions of that stage of life. The difference, on average, was seven years. The researchers observed this phenomenon in both genders and all ethnicities. Also, they found the same results across socio-economic and education levels.

Bargh, Chen, and Burrows conducted another study in 1996 about age-related stereotypes that had fascinating results. They attempted to activate stereotypes about old age in groups of young participants. Researchers used scrambled sentences and words, as well as photographs, to activate the stereotypes. They found that the young people who had had the stereotypes activated actually walked more slowly after the activities.

A lighter take on aging

The Last Laugh does a masterful job of addressing the human need to feel alive until the very end. Your identity is something that you spend your entire life developing. The idea that when you finally reach the end of your life you have to give up the person you’ve always been is tremendously cruel. We also often ask older adults to give up the very things that make them feel alive and treat them in a way that damages their self-esteem. Aging is a privilege, as long as you don’t have to stop feeling alive. The Last Laugh is a good reminder of these ideas, as well as an incredible opportunity for these two actors to get back on the screen, maybe for the last time.

The Neuropsychology of Aging
Everyone gets olld and your cells age as time goes by. One of the fields that study these changes at the neural level is the neuropsychology of aging. Read more »
Link copied!
Interesting Articles
Cinema, Television, and Psychology
3 Movies for Self-Discovery