In this article, learn about the unique characteristics of depression in older adults and how social support can decrease the risk of psychological and physical disorders. 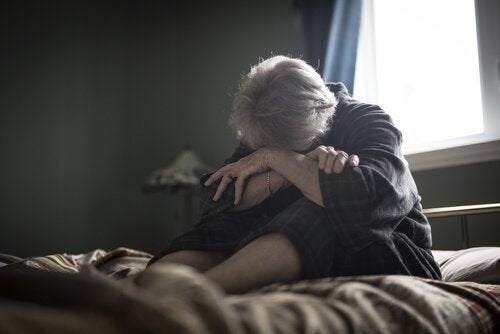 Depression is not a homogenous diagnosis. It changes according to the specific characteristics and context of each person. Things like age group, gender, and socioeconomic level affect how depression manifests itself. When children are depressed, for example, they tend to be more irritable or angry than sad. Children also tend to display more physiological symptoms of depression and trouble sleeping.

Epidemiological data shows that depression in older adults also has some unique characteristics. Consequently, offering a general treatment for all patients is ineffective.

Sometimes, people interpret the signs of depression in older adults as just a normal part of aging, which means said signs aren’t addressed. Not only that, but the drugs that are normally used to treat depression aren’t always the best choices for older adults.

Many older adults who live in nursing homes suffer from clinical depression. It’s difficult for many of them to explain their symptoms. They usually describe them as somatic complaints. Thus, older adults with depression often complain about having trouble sleeping, lack of energy, aches, and pains, etc. The overlap between physical illness and depression means that healthcare professionals often misdiagnose patients.

Characteristics of depression in older adults

The importance of a support network for older adults with depression

Preventing depression in elderly patients is crucial. To that end, researchers Lowenthal and Haven conducted a study that showed how it important it is for older adults to have a confidant. Having social support not only improved older adults’ mental health but also their physical well-being.

Not only that, but having a social support network means that older adults are more likely to take care of their own health and adhere to medical treatment plans. Satisfying relationships in old age increase immunocompetence and regulate stress.

Loneliness increases the risk of depression

In terms of psychological health, loneliness is also an important factor. Older adults who are alone or who feel alone are much more likely to suffer from depression. Thus, a social support network can protect senior citizens from stress and anxiety.

A great way for older adults to fight depression is to create a network of friends with similar interests. Doing regular recreation or leisure activities with friends or a spouse make it much easier for senior citizens to adjust to retirement.

In conclusion, older adults who spend time with friends or a pet and aren’t lonely are less likely to suffer from depression. They generally enjoy better health and don’t have to use the health care system as much.

Since prevention is always best, it’s crucial to make sure that older adults have company and opportunities to improve their well-being and contentment.