The Indications and Uses of Psychotropic Drugs

Psychotropic drugs are chemicals used for the treatment of disorders of the mind. They affect the central nervous system by modifying behavior, perception, and consciousness. 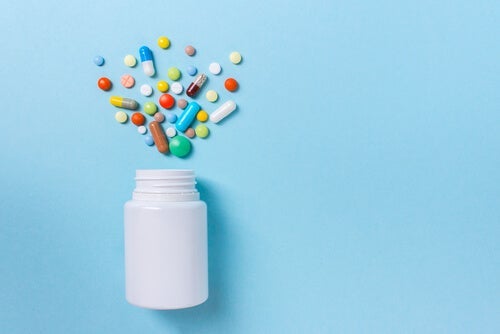 The uses of psychotropic drugs are many and varied. They’re undoubtedly an important tool in psychology and psychiatry. They’ve helped substantially improve the prognosis of many mental illnesses. However, like all drugs, they can cause important side effects that must be assessed and controlled.

On the other hand, treatment with psychotropic drugs shouldn’t mean that we forget other ways of treating patients, including psychological therapy. Why? Because these resources complement each other in order to help resolve the underlying causes of many of these problems. We’ll be looking at the uses of psychotropic drugs in this article.

What are psychotropic drugs?

In the early 1950s, the discovery of chlorpromazine revolutionized psychopharmacology. From that moment on, advances in this field have continued at a dizzying pace.

Even today, it continues to be an important field of research in the search for more specific drugs with fewer side effects.

How do psychotropic drugs work?

Although the causes of many mental illnesses are still unknown, it’s been proven that they’re related to metabolic alterations, specifically in brain neurotransmitters (NTs).

These chemical substances, released in the neuronal synapse and that act on specific receptors, intervene in the transmission of nerve impulses. The modification of the effects of NTs is the mechanism of action behind most psychotropic drugs.

The main NTs these drugs act on are:

Scientists generally consider that, in states of cerebral hyperactivity, the release of NTs increases in the synapse. However, in the most depressive states, there’s a decrease in the release and/or density of the NTs in the intersynaptic space.

According to this, some psychoactive drugs aimed at treating psychotic and agitated states act by decreasing the concentration of certain NTs or by blocking their receptors. On the other hand, others, which are used to treat depression, act by increasing their concentration.

But this isn’t the only explanation. The nervous system is very complex and is influenced by many factors. Because of this, it’s difficult to know all the mechanisms involved in it. Therefore, as Silvia Wikinski states, we can’t explain many aspects of mental illnesses simply by using these processes.

Although there are many classifications, we can group them under four major headings:

To these, we can add psychostimulants, anti-dementia drugs, or psychopharmaceuticals, among others, for the treatment of dependencies. However, we’re going to focus on these four main groups.

Types and uses of psychotropic drugs

The main indication for antipsychotics is the treatment of psychoses such as schizophrenia. This is a complex illness characterized primarily by:

We can classify antipsychotic drugs as follows:

Anxiolytics, which focus on the treatment of anxiety, are the most-used psychotropic drugs today, as stated by the OCU. On the other hand, many of them are also used as sedative agents for the treatment of insomnia.

Their main mechanism of action is to promote the actions of GABA agonists in the GABA-A receptors. Thus, it increases the inhibitory effect of this neurotransmitter. GABA is responsible for regulating neuronal excitation in the nervous system.

We can highlight several groups of drugs:

Antidepressant drugs, after anxiolytics, are the most widely-prescribed psychotropic drugs today. They’re prescribed for the treatment of depression, generally characterized by a decrease of NTs in the neuronal synapses. Therefore, in general terms, antidepressant drugs increase the concentration of these substances through different mechanisms of action.

There are many types of antidepressants. Below, we’ll highlight three important groups.

These are drugs used in the treatment of mood disorders, such as bipolar disorder, characterized by manic and depressive episodes.

There are two groups of mood-stabilizing drugs:

In short, although the causes of many mental illnesses are still unknown, psychotropic drugs can substantially improve patients’ prognosis and bring us closer to a cure for these disorders.

Nowadays, pharmacology is highly developed. There are many different psychotropic drugs, and it’s possible to personalize therapies by individually adapting them to each patient.

The 5 Psychotropic Drugs that Changed History
What are psychotropic drugs? How did they come about and what are the most important ones? We'll try to answer these and other interesting questions. Read more »
Link copied!
Interesting Articles
Psychopharmacology
How Antidepressants Work

Psychopharmacology
The Use and Abuse of Anxiolytics and Hypnotics