The Fascinating Life of Gut Neurons

Your gut is the home of a vast ecosystem that's made up of more than bacteria. There are also hundreds of millions of neurons carrying out essential functions and establishing direct connections with the brain. 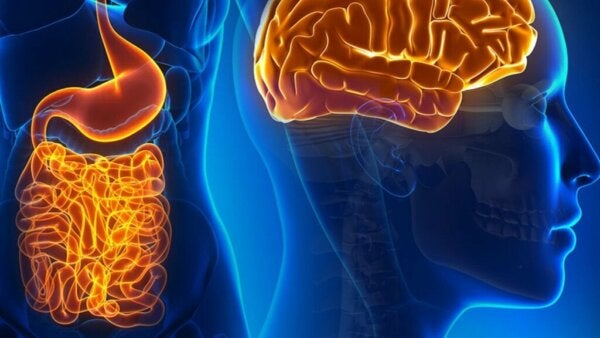 Sometimes, what goes on in the human body is even more fascinating than the workings of the universe. For example, the brain remains a mystery to scientists in many ways. Another endlessly complex system is the digestive system and the gut neurons that do everything from determining your mood to protecting your health.

If you want to comprehend the importance of this “second brain”, consider this piece of data. The nervous system in your gut has up to five times more neurons than your spinal cord. This extremely complex neural network houses hundreds of millions of neurons.

If that weren’t enough, your gut is in constant connection with the brain, mediating important functions such as serotonin production. There’s another significant player in this mind-gut connection as well: gut microbiota, which is essential in what’s still a mysterious conversation between your stomach and your brain.

Thanks to modern science, we know the answers to some of the questions about the gut-brain connection. Let’s delve right in!

Your gut neurons affect your well-being and your health

Gut neurons are important for your digestive, hormonal, immune, and metabolic systems. They’re also crucial for your psychological health. In recent years, scientists discovered a relationship between certain depressive disorders and alterations in the vast ecosystem that is your gut.

Studies like this one from Üsküdar University in Istambul reveal that the neural network and microorganisms in your gut are crucial for the production and distribution of neuroactive substances such as serotonin and gamma-aminobutyric acid. Any problem in these systems can affect your mood.

As scientists focus their microscopes more and more on these hidden worlds, they’re discovering amazing things about the body. For example, every one of us has a complex neural network in the intestinal tract that works in conjunction with the brain. Let’s learn more.

Why do you have neurons in your enteric nervous system?

The enteric nervous system encompasses the esophagus, stomach, small intestine, colon, etc. We know that the digestive tract and the intestines have a broad neural network. Studies like this one from Harvard University that was published in Nature magazine have managed to map these neurons in human and animal subjects.

You might be asking yourself why humans have such a great variety of nerve cells. The answer is simple. The cells in your gut work together with the brain to protect you from illness, carry out important digestive tasks, metabolic conditions, and hormonal problems, and regulate emotions.

What do gut neurons do?

The fact that your gut has more than 100 million neurons makes it seem like a second brain. However, you should understand an important aspect. The neural system in the gut doesn’t think, reason, solve problems, or write poetry. Nevertheless, it does regulate your emotional state.

The motor neurons and sensory neurons are present in the gut. They collect in two places: the myenteric plexus and the submucosal plexus.

1. The submucous plexus or the Meissner plexus – hormone and enzyme stimulation

This nerve cell network extends from the esophagus to the anus. It’s responsible for facilitating hormone secretion, enzyme secretion, and all the essential substances for digestive processes. This first network carries out essentially stimulating tasks.

Auerbach’s plexus is the most important for this system because this group of gut neurons is the one that has a direct connection to the central nervous system. Consequently, this area includes afferent or sensory neurons, interneurons, and motor neurons.

The connection between the brain and gut cells

The communication between the brain and gut cells is bidirectional. In other words, there’s a direct and constant data interchange through a specific neural network, which means that the messages arrive almost immediately.

In a recent study conducted by Dr. Diego Bohordez, researchers discovered that the communication occurs through the vagus nerve, which connects to the encephalic trunk. Glutamate, a neurotransmitter, aids the process by optimizing communication between the gut and the brain.

On the other hand, scientists have discovered that these messages travel at the speed of 100 milliseconds, faster than a single blink. Thanks to this super communication network, the brain can regulate digestive, metabolic, and hormonal processes.

Gut cells send up to 90% more information to the brain than the brain sends to the gut. Intuitively, that suggests that the enteric nervous system is making many independent decisions. The gut neurons, along with the microbiome, are crucial for protecting us from illnesses and regulating our mood through serotonin production.

In conclusion, we still have a lot to learn about the gut-brain connection. We don’t have conclusive evidence, for example, of how the gut microbiota determines behavior. Nevertheless, we’re finding out more and more every day, which will enable to us take better care of ourselves and each other.

Mental Digestion: A Possible Source of Intestinal Problems
Your digestive system can affect your mood and vice versa. This is where the concept of "mental digestion" comes into play. Learn more about it here! Read more »
Link copied!
Interesting Articles
Research
How Generosity Affects the Brain