Why do we tend to explode at the end of the day and not at the beginning? The answer to this question lies in the excitation transfer paradigm. 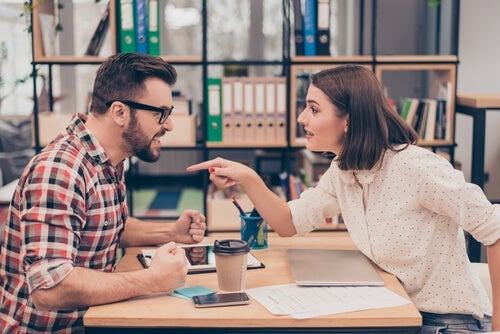 It’s the 92nd minute of the soccer match. There’s one minute left. Barcelona is beating Real Madrid 1-0. A Barcelona player tries to stop a Real Madrid player in the penalty area and he falls to the ground. The referee gives a penalty and the Barcelona players are furious with him. They explode with anger. A player from the Catalan team says something to a Madrid player and he loses his temper. The referee has no option but to show two red and several yellow cards. Amidst all this drama, what’s going on inside their bodies? All of them are victims of something that we know as excitation transfer paradigm.

It’s common to find yourself in situations where someone reacts unnecessarily to a seemingly innocuous comment or action. They often go completely over the top. On many occasions, a loved one or friend will have responded unpleasantly to a comment we’ve made or to something we’ve done. However, it was never our intention to harm or offend the other person.

These types of situations tend to occur more frequently at the end of the day. Why does this happen? Keep reading to find out!

What’s happening to us?

Dolf Zillmann developed the idea of the excitation transfer paradigm following on from the two-factor theory of emotion that Stanley Schachter put forward. According to this author, excitation is equivalent to physiological activation. Although the theory is much more detailed and extensive than that, this brief description is enough to explain and understand Zillmann’s paradigm.

According to Zillmann, the physiological activation doesn’t just end when the situation has finished. It takes time to disappear because the hormonal processes involved are still in progress.

Thus, if a person’s emotions have been “activated” in what we we’ll call “situation A”, and then, soon afterward, they’re involved in “situation B”, which also activates emotions in him, then these two situations will combine and the results will compound. Experts call this residual excitation. It’s the degree of activation that we drag from one situation to another.

When we drag the arousal of situation A to situation B, we usually mistakenly attribute all our reactions only to context B. Let’s imagine another situation. Your workday is going from bad to worse. Then, not long before it’s time to go home, your boss gives you another task to do. Although you have time to do it, you could easily explode fue to all the accumulated emotions throughout the day. You probably don’t tell him your feelings most of the time and there’s a progressive accumulation. And yet you attribute all your anger to the last task your boss gave you.

If your boss had assigned that task at the start of the day, then you would probably have carried it out without a problem. There probably still wouldn’t be any sign of any physiological activation. However, that all depends on how the day had been going from the moment you woke up until the time you got to work. Thus, the excitation transfer paradigm may or may not activate, depending on how the day is going.

This, before reacting to someone with anger, it’s better to let a few minutes go by and to try to relax as much as possible. In many cases, you’ll be near boiling point, and whatever someone says to you will make you explode. If someone tells you not to talk to them because they’re having a horrible day, then it’s best to take their advice and not say a thing to them.

In 1971, Zillmann conducted an experiment on the effect of watching movies with different types of aggressive content. He highlighted three different stages:

On the basis of Zillmann’s theory, in 1993, Scott C. Bunce’s research team carried out an investigation on excitation transfer. One of their main findings was that extroverts reacted worse to unpleasant stimuli. The reason, according to the authors, is that those who have higher scores in this personality trait seemed to have fewer negative experiences in their lives, and that meant that they had to make a greater effort to process them.

Those who have carried out research into the excitation transfer paradigm have shown that activation changes aren’t correctly attributed to the events that actually trigger them. Those who take part in the research came to the conclusion that this activation of emotions is caused by the current situation. They didn’t consider that the previous situations could have caused that activation to take place gradually.

The results also suggest that reactions and actions aren’t necessarily linked to the close relationships between the perceived excitation and its cause. This effect highlights the relevance of the physiological excitation in the modulation of emotional intensity. It also confirms the idea that it’s undifferentiated and not specific.

Hidden Anger: The Emotion that Changes Our Personality
Not a lot of people are familiarized with anger and the ways it emerges. Hidden anger, that rage we feel but keep to ourselves, can damage our personality. Read more »
Link copied!
Interesting Articles
Emotions
When I Get Angry, I Lose Control - What's the Matter with Me?

Do you have problems controlling your anger? Do you tend to say the first thing that comes to mind and…

Emotions
Regulating Emotions in Old Age: The Key to Wellbeing

Correctly regulating emotions in old age is an exercise in health and well-being. Interestingly, researchers have found information from several…