The Drug Ketamine: Its Uses and Abuses

Ketamine was classically used as an anesthetic but is also a drug of abuse. However, it's now recognized as being effective in other fields. 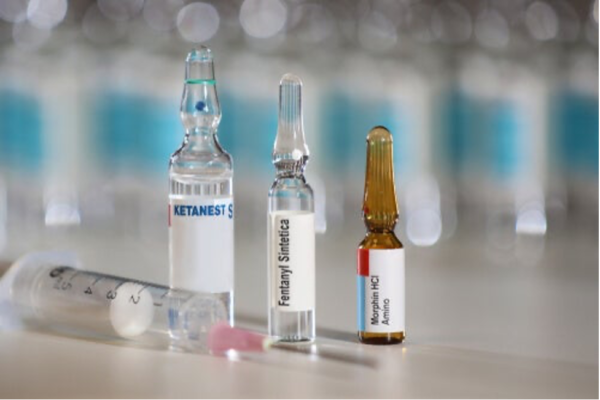 “I saw a light at the end of a tunnel.” This is a well-known phrase you often hear in the media about people’s “out of body” or “near-death” experiences. However, leave aside the paranormal for a moment. This is because a well-known anesthetic drug might be responsible for some of these experiences. It’s the drug ketamine.

These out-of-body experiences usually mean that the person has the sensation of looking back at their own physical body from a distance. However, some of the people that reported these experiences were, at the time, undergoing surgery under the anesthetic effects of ketamine.

Ketamine as a psychotropic drug

Ketamine is a drug that has powerful psychotropic properties. Therefore, it could provide a scientific explanation to the tunnel stories of near-death experiences.

Like other recreational drugs, ketamine generates perceptual dissociative phenomena in the individual. This means that your perceptions of both time and self become disordered and illogical.

Ultimately, your perception becomes distorted and completely jumbled up. You experience intermodal sensory transfers. For example, hearing a color or tasting a sound. Furthermore, in more extreme cases, your sense of time changes and reverses, expands, or contracts. Hence, you no longer recognize either the boundaries of your own body or your body parts.

Multisensory hallucinations, visual, auditory, taste, touch, and olfactory, occur frequently. In addition, you experience an altered state of consciousness, far away from real-time and place.  This phenomenon is informally known as “a trip”.

According to people’s own accounts, they often meet and talk to dead people, fictional characters, or even different versions of themselves. It’s also quite common for the individual to believe they’ve died. Therefore, they might experience anxious excitement and intense emotions, particularly related to fear.

When ketamine is used in a therapeutic and controlled way, such as in the operating theatre, the psychoactive effects are transient and reversible. However, if you ingest ketamine in different doses, you can experience a profound dissociative state known as a K-hole.

It can also make you see people and situations which don’t exist. This can make it difficult to reconcile yourself with reality. Furthermore, there’s a great risk of lasting after-effects and ketamine can cause psychotic outbreaks if you’re biologically predisposed to them.

These problems have made the use of ketamine highly controversial. Therefore, its legal use on humans has been restricted in recent years. Indeed, it’s sometimes only used as a last resort. However, in veterinary surgeries, it remains the anesthetic of choice for large animals.

The drug ketamine and its uses

Ketamine is a type of medication generally used for the induction and maintenance of anesthesia in human surgery, both adult and pediatric. It has the capacity to induce a trance-like state whilst also providing:

In addition to surgical use, ketamine is also widely used in the veterinary field. Furthermore, it’s used to treat chronic pain and also for sedation in intensive care units. (ICU).

Whilst the drug is administered, checks are carried out on the heart and respiratory and other reflexes. Normally, it isn’t until the effects begin to wear off that undesirable side effects occur, such as:

These are the effects of this drug if you use it illegally and for recreational purposes. Also, when it’s administered at higher dosages or not in accordance with clinical guidelines.

There are legal restrictions surrounding the usage of ketamine. In fact, it’s now widely considered an addictive drug. However, despite the resistance of clinical, pharmaceutical, and patient groups themselves, numerous research has been conducted on alternative uses for the drug.

“Declare the past, diagnose the present, foretell the future.”

This action, along with its pharmacokinetics and pharmacodynamics, makes ketamine a powerful anesthetic and sedative. Therefore, it’s very useful medically. Furthermore, the drug acts in a dissociative manner due to its link to the NMDA receptor.

The aforementioned uses are typical in clinical practice. However, there are less widespread uses ketamine seems to be a suitable alternative for:

The drug ketamine and depression

There are a number of new uses attributable to ketamine. However, the one that seems most likely to be rolled out and to receive clinical marketing is its use as a complement to anti-depressive therapy.

This is a world away from the established monoamine hypothesis that for decades has fuelled the research and production of anti-depressant drugs. In fact, what’s really new is that those patients that seem to benefit most from ketamine are the ones that didn’t get many benefits from traditional anti-depressants.

Indeed, ketamine acts in a way that other anti-depressants don’t, by helping patients whose depression is resistant to the usual drugs. These results came as a surprise to many scientists.

This all goes to show that, sometimes, solutions are much closer than we think. Indeed, we’re often so eager to achieve great things, we tend to look far and wide for answers. Thus, it comes as a great surprise when we discover that the solution was right in front of our eyes.

Ketamine: An Illegal Drug With a Future as an Antidepressant
When people hear ketamine they usually just think of a party drug. But this former painkiller might actually be the solution to depression. Read more »
Link copied!
Interesting Articles
Treatments
Weight Gain Associated with Psychoactive Drugs