Out-of-Body Experiences - What Are They?

Imagine that you're having an out-of-body experience so you can see yourself as others see you. This incredible phenomenon. Read all about it here! 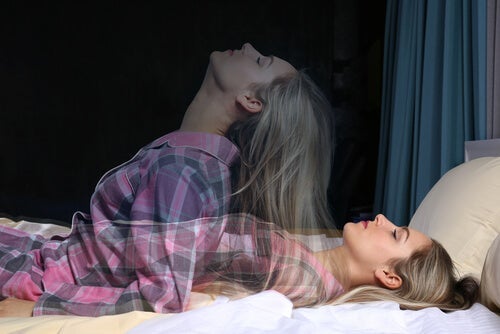 Out-of-body experiences encompass several phenomena that are as fantastic as they’re complex. Imagine yourself floating out of your body; this is exactly how it feels. For a long time, the explanations were tribal and mystical. However, now we know it’s all in our brains.

Moreover, out-of-body experiences are perceptual phenomena that include experiences of illusory movement. Among them, we can highlight flying, falling, floating, and seeing ourselves from outside. These dissociative experiences are related to neurological and psychological factors and can occur both in healthy and unhealthy people.

We can divide this phenomenon into two types of experiences with well-defined characteristics:

Why do we have out-of-body experiences?

Out-of-body experiences are often associated with altered states of consciousness. Thus, many authors compare the phenomenon with characteristic states of highly imaginative dreams. In addition, it’s a process of an anomalous multisensory integration in which a person is aware of the situation. It’s for this reason that the vestibular, motor, and sensory systems are essential for pregnancy.

“Send these images of me through the Internet out into the universe, where I’ll continue my out-of-body existence.”

Systems involved in this phenomenon

When there are alterations in any of the above systems, the predisposition to experience yourself outside your body increases. Disorders linked to sleep, drug use and brain injuries can create the optimal conditions for these phenomena.

Among the phenomena that happen during sleep, we can highlight the following:

Is it possible to induce an out of body experience?

For centuries, these experiences were linked to the paranormal. This isn’t strange because our ancestors didn’t have the knowledge to study them. Today, we know this phenomenon is due to a distortion of one’s body image, related to cognitive processes such as memory, self-perception, and imagination.

Just as there’s an organic basis for this experience, some psychological factors are also closely linked to the phenomenon. Personality is the most prominent. Several studies reveal that these experiences are more frequent in subjects with a high degree of fantasy and openness. This relationship shows that experiences are also caused by suggestions and personality characteristics.

One can also artificially induce this phenomenon. The most effective techniques to do so are:

This phenomenon usually occurs in states where brain activity is similar to that during sleep but where a person retains consciousness. Researchers discovered that those who meditate regularly have an easier time achieving such experiences. It’s what they refer to as “astral projection”. Thus, Theta waves usually proliferate in extreme states of relaxation such as meditation.

The involvement of mirror neurons

Authors Jalal and Ramachandran propose that the mirror neuron system is so connected it allows virtual vision in the third person. Mirror neurons simply fire up as soon as we see another person do something and connect with our higher centers to anticipate or mimic it, even if we do so just symbolically. The connection of these neurons with the cerebral cortex and afferent pathways is what leads to the “separation from the body” under conditions of sensory disturbance.

Note that seeking this type of experience isn’t necessarily healthy and can be dangerous as it’s closely associated with psychotic crises.

Because people often associate this phenomenon with the paranormal; they refused to speak about it for many years. They didn’t want to be thought of as mentally unstable. Thus, understanding the true causes of this phenomenon is a great first step in treating it correctly.

The Benefits of Lucid Dreaming
Lucid dreams are those which we experience while we are asleep, but at the same time we are conscious of the fact that they are not real.  Read more »
Link copied!
Interesting Articles
Brain
The Brain Processing of Future Episodic Thinking