The 5 Psychotropic Drugs that Changed History

What are psychotropic drugs? How did they come about and what are the most important ones? We'll try to answer these and other interesting questions in this article. 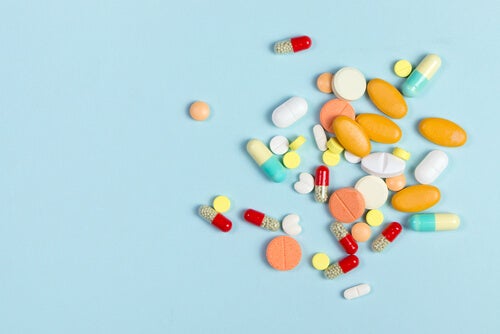 The symptoms of mental illness stem from biological and environmental factors, including maladaptive behavior patterns. Many types of mental health professionals provide psychotherapy. However, psychiatrists, who are trained as physicians, may also prescribe psychotropic drugs as part of their treatment.

Experts have shown that both psychotherapy and psychotropic drugs are effective for many psychiatric disorders. Often, a combination of the two works best.

The birth of modern psychopharmacology dates back to the 1950s, when a series of discoveries changed the course of psychiatry and the lives of millions of patients forever.

The following psychotropic drugs (although some are no longer commonly in use) changed the field of therapy dramatically, opening up psychiatry to the treatment of disorders that were once considered untreatable. Their discoveries are among the greatest achievements in the history of medicine.

The most influential psychotropic drugs in mental health

In 1948, John Cade made the discovery of lithium as a treatment for bipolar disorder. He was an Australian psychiatrist who was trying out lithium because it can neutralize uric acid. At the time, he believed that this acid was the cause of the mania.

As it turned out, bipolar disorder had, and has, nothing to do with uric acid. However he wasn’t deterred, and lithium proved to be a great help to patients with manic conditions from that moment on.

Lithium was the first modern psychopharmaceutical. Experts showed it to be effective as an antimanic drug in 1949, before the discovery of chlorpromazine. It became the first drug to be used specifically for a particular psychiatric disorder.

More than seventy years after its discovery, lithium remains the most effective medication in psychiatry, with a response rate of more than 70% in patients with bipolar disorder. It also has useful benefits in the treatment of unipolar depression.

The discovery of lithium as an effective treatment for bipolar disorder marked the beginning of the revolution of psychopharmaceuticals in psychiatry. For the first time in history, something could be done to treat serious mental illness.

The fortuitous discovery of lithium in 1948 was followed shortly afterward by another miraculous discovery: the world’s first antipsychotic drug.

In 1949, a French military surgeon in Tunisia named Henri Laborit was looking for a way to reduce surgical shock. He was investigating an antihistamine by the name of chlorpromazine and had discovered that this drug had profound psychological effects on patients when administered before surgery.

Laborit, in 1952, convinced another psychiatrist to administer the drug to a schizophrenic patient for the first time.

The use of chlorpromazine as the first neuroleptic swept throughout Europe. In the United States, however, where psychoanalysis was very much in vogue, they stopped its advances.

At that time, American psychiatrists were looking for psychosocial explanations for schizophrenia, such as Gregory Bateson’s double bind theory. Anything to do with psychotropic drugs was of little or no interest.

The pharmaceutical company that produced chlorpromazine (with the brand name Thorazine) began to court state governments, rather than psychiatrists and medical schools. They insisted that the drug could save state mental health programs a tidy sum of money.

Shortly after this, almost all major psychiatric hospitals in the United States had subscribed to the chlorpromazine line of treatment. The introduction of Thorazine in the United States contributed to the deinstitutionalization movement, and the number of hospitalized patients decreased from approximately 600,000 in 1952 to 160,000 in 1977.

Chlorpromazine remains one of the most effective antipsychotic drugs, particularly for severely ill patients, and has useful applications in emergency situations. Like lithium, it’s on the World Health Organization’s list of essential drugs.

The third discovery in early psychopharmacology was imipramine, the first tricyclic antidepressant.

In the early 1950s, pharmaceutical companies were looking for new drugs to compete with Thorazine in the schizophrenia market.

Roland Kuhn, a Swiss psychiatrist employed by the pharmaceutical company Geigy, who was always more interested in depression than schizophrenia, made a breakthrough. He decided to administer this drug for depression, going behind the back of the pharmaceutical company that was funding his research. The results he got were a revolution for the time.

Within weeks of starting treatment with imipramine, Kuhn’s chronically depressed patients began to regain a sense of purpose, motivation, and hope. Their depressive symptoms, once considered untreatable, responded very well to this new drug.

With the discovery of imipramine, psychiatry finally had effective biological treatments for its three major disorders: schizophrenia, bipolar disorder, and depression.

Valium was invented by chemist Leo Sternbach in Hoffman-La Roche in New Jersey (1963), the second benzodiazepine drug to be discovered, after Librium, in 1960.

Benzodiazepines became very popular in the 1960s and 1970s as anti-anxiety drugs. This was because their side effects lacked the severity of the side effects of barbiturates, the previous generation of sedatives.

An overdose of barbiturates could be lethal. Possibly because of this, the cultural stereotype of “killing yourself with sleeping pills” remains.

Benzodiazepines are only lethal in exceptional cases and are very safe in overdose. However, they’re also highly addictive. As a family, they belong to all three categories: they’re sedative, anxiolytic, and hypnotic at the same time. It all depends on the molecule in question, the dose, and its half-life in blood.

5. The creation of Prozac

In the last 30 years, perhaps no psychiatric drug is better known than Prozac (fluoxetine). It was discovered by Eli Lilly and Company in 1970 and started being used in the United States.

Since the introduction of Prozac, a number of SSRIs have since been discovered. Each of them has a slightly different chemical structure and side effect profile, but are similar in their basic mechanism and effectiveness. The main reason for their popularity is that they produce very few side effects and have a wide spectrum of uses and effects.

The names of the SSRIs are fluoxetine, fluvoxamine, paroxetine, sertraline, citalopram, and escitalopram. The discovery of SSRI drugs was a landmark achievement in psychiatry and they are now the most widely prescribed medications for clinical depression, anxiety disorders, or obsessive-compulsive disorder.

Psychological Therapy or Drugs
The use of psychological therapy and drugs to treat psychological disorders is often the subject of much debate. The former has longer-lasting results. Read more »
Link copied!
Interesting Articles
Psychopharmacology
Antidepressants and Alcohol: What Are the Risks?