The Differences Between Alzheimer's and Parkinson's

Have you learned the differences between Alzheimer's and Parkinson's? These diseases are some of the common causes of dementia. Read this article to learn more about them! 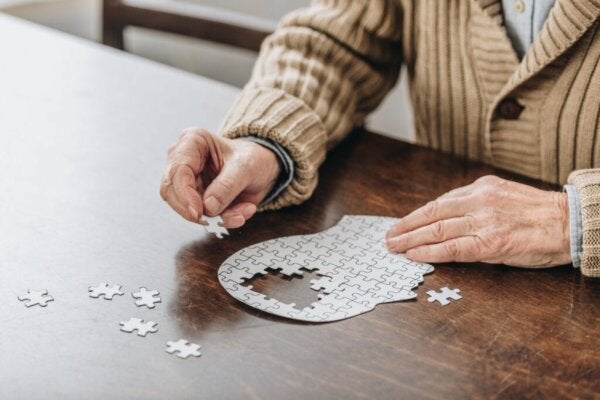 Do you know the differences between Alzheimer’s and Parkinson’s? First of all, we must say that both diseases constitute two of the causes of dementia. Now, let’s be a bit more specific. According to data from the WHO (World Health Organization), dementia due to Alzheimer’s disease represents 60-70% of all cases of dementia in the world.

However, it’s important to keep in mind that they’re very different diseases. Additionally, we must make clear that having either condition doesn’t always lead to the development of dementia (although it does occur in most cases). In this sense, we know that between 20-60% of people with Parkinson’s disease end up developing dementia.

Buter et al. (2008) conducted a study that was published in the journal Neurology. It was conducted with 233 patients with Parkinson’s disease. The researchers were able to observe that about 60% of them developed Parkinson’s dementia in a period of 12 years.

So what’s dementia? It refers to the set of symptoms that arise as a consequence of neurological damage or disease. These symptoms involve the loss or weakening of the mental faculties and mainly affect three different areas: cognitive (for example, memory loss or alterations in reasoning), behavioral (changes in conduct), and personality (changes in personality, irritability, and emotional lability, among other things).

Differences between Alzheimer’s and Parkinson’s

We’re going to group the differences between both illnesses into different blocks and explain what each of them consists of. All of them have been extracted from two reference psychopathology manuals: Belloch, Sandín, and Ramos (2010) and the DSM-5 (APA, 2014).

The first block of differences between Alzheimer’s and Parkinson’s refers to their type of symptoms. Let’s see what they are.

One of the biggest differences between these two diseases is related to the way they affect the cognitive area. In the case of Parkinson’s, there are failures in data retrieval (memory), while, in Alzheimer’s, failure occurs earlier in the memory process (data encoding). Furthermore, memory and attention are more affected in Alzheimer’s than in Parkinson’s.

In the case of Parkinson’s, the so-called Parkinsonism appears, a clinical syndrome characterized by the following symptoms: rigidity, tremor, bradykinesia (slowness of movement), and postural instability. In contrast, in Alzheimer’s, it’s very rare for Parkinsonism to occur.

Psychotic symptoms and others

In addition to the symptoms we already mentioned, other symptoms may appear in both diseases. For example, in Alzheimer’s disease, delirium appears occasionally, while it rarely ever does in Parkinson’s. It’s vital to remember that delirium is an organic disorder that mainly affects consciousness and attention.

Regarding psychotic symptoms, visual hallucinations can appear in both diseases, more or less in the same proportion. Delusions may also arise. They occur often in Alzheimer’s and occasionally in Parkinson’s.

Another difference between these two diseases is related to the brain (neurotransmitters and atypical structures). For example, while senile plaques typically appear in Alzheimer’s (extracellular deposits of molecules in the gray matter of the brain), it rarely ever happens in Parkinson’s.

The same occurs with other structures. For instance, neurofibrillary tangles, which appear a lot in Alzheimer’s but very rarely in Parkinson’s.

On the other hand, Lewy bodies happen more often in Parkinson’s than in Alzheimer’s. When it comes to neurotransmitters, we know that acetylcholine deficiency often occurs in the brains of people with Alzheimer’s but this occurs only occasionally in individuals with Parkinson’s.

Also, keep in mind that there’s a dopamine deficit in Parkinson’s, something that doesn’t occur in Alzheimer’s.

Regarding the type of dementia, in Alzheimer’s it’s cortical (it implies the involvement of the cerebral cortex). In contrast, Parkinson’s dementia is subcortical (it involves the subcortical areas of the brain).

In this sense, it’s important to note that cortical dementias generally carry cognitive symptoms, while subcortical dementias carry motor symptoms. However, both types of symptoms can be combined to a greater or lesser extent.

Let’s remember something. On one hand, cortical dementias include Alzheimer’s, frontotemporal dementia, Creutzfeldt-Jakob disease, and Lewy body dementia. Subcortical dementias, on the other hand, include Parkinson’s, Huntington’s, and HIV associated dementia, for the most part.

How to Communicate with People with Dementia
Communicating with people with dementia can be complicated. Maybe you understand the challenge first-hand because you have a loved-one with dementia. Read more »
Link copied!
Interesting Articles
Illnesses
The Mini-Mental Test for Detecting Possible Dementia

Health
The SDQ Questionnaire to Evaluate Skills and Difficulties in Children

Experts estimate that 15% of children from some sort of psychological disorder. However, it's difficult to detect and make precise…

Nitric oxide is a neurotransmitter with amazing functions. For example, it aids our memory, conditions the quality of our sleep,…