The Differences Between Cortical and Subcortical Dementia

Are all dementias the same? The answer to that question is no, and we'll be telling you why in this article. 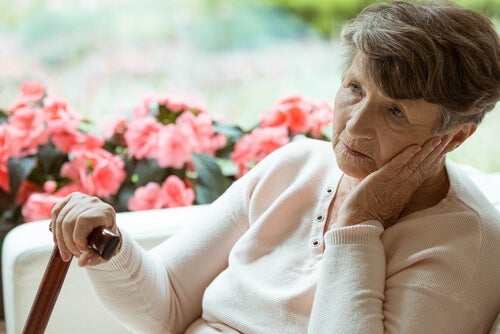 When we talk about dementia, we mean progressive global cognitive impairment. Contrary to what many people may think, aging isn’t a cause of neurogenerative diseases. Although there’s comorbidity (the presence of one or more additional conditions), there’s no causality.

A curious fact is that 30 percent of Parkinson’s patients have dementia, but the remaining 70 percent don’t. But are all dementias the same? The answer is no; there are two main types of dementia, associated with different diagnoses. In this article, as we mentioned above, we’ll be talking about the differences between cortical and subcortical dementia.

During the first half of the 20th century, dementia was equivalent to progressive intellectual deterioration. In 1987, the American Psychological Association (APA) established diagnostic criteria. They stated that cognitive impairment had to be accompanied by a deterioration in memory, and by at least one of the following deficits: aphasia, apraxia, or agnosia.

In 2012, the term dementia was eliminated and replaced by neurocognitive disorder.

The differences between cortical and subcortical dementia begin with the origin of the condition. In Alzheimer’s disease, the prototype of cortical dementia, there’s a cortical temporoparietal predominance (Gustafson, 1992). Because of this, these dementias often cause deficits in short-term memory, episodic memory, and verbal fluency.

The characteristics of cortical dementia

Let’s take Alzheimer’s disease as a point of reference in order to explain some of the consequences of cortical dementia on the cognitive processes of those who suffer from it. Doctors highlight the following processes:

It causes changes in a patient’s cognitive functions. The prefrontal area of the brain is closely and widely connected to subcortical areas. The condition of the latter implies a functional deactivation of the cortex.

The typical subcortical dementias are Huntington’s disease and Alzheimer’s disease. However, dementia doesn’t always manifest in these two conditions. In fact, only 20 to 30 percent of patients with Parkinson’s disease have sufficient diagnostic criteria to be diagnosed with dementia.

The keys to subcortical dementia

We’ll now take Parkinson’s and Huntington’s diseases to explain the main characteristics of subcortical dementia. Some of them are:

The severity of cortical and subcortical dementia

As we’ve seen, there’s a substantial difference between cortical and subcortical dementia. However, the main difference is their severity, and how they impact a person in their daily life. Although we haven’t mentioned all the symptoms in both types of dementia, we can highlight a lower cognitive impairment in subcortical dementias than in cortical ones.

The difference here isn’t only the degree of cognitive impairment. The other major difference is that, in subcortical dementia, the patient doesn’t suffer from aphasia, agnosia, or apraxia, something that does occur in cortical dementia.

In the case of subcortical dementias, the executive functions are affected right from the beginning: slight forgetfulness and a language without aphasias, but perhaps an excessive desire to talk. Both dementias affect perceptual and visuospatial capacities.