The Dangers of Emotional Eating during Lockdown

Making bread or cakes, drinking a glass of wine, or having snacks between meals... Food in the current coronavirus confinement is acting as a way to run away from our emotions and a way of finding pleasure in the midst of an anxiety-creating context. 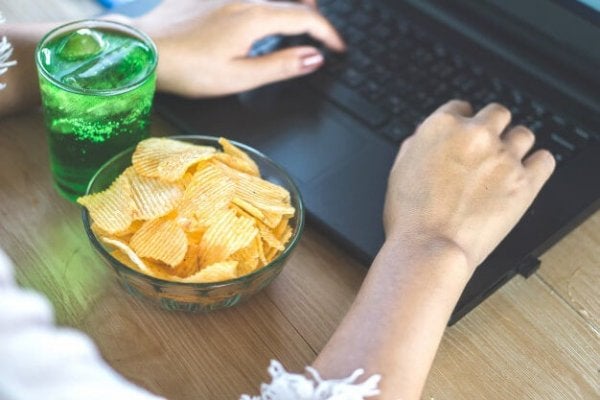 Emotions aren’t only felt, they’re also eaten. In a context as unusual as the one we’re living in, eating is one of the areas that can be most affected. It can even reach the extreme of becoming a real emotional escape. Confinement acts as a trigger for anxiety and this can alter your eating patterns in several ways. Discover the dangers of emotional eating during lockdown in this article.

Food is something to enjoy, and, in these moments when anxiety and stress can dominate your life, it can act as a real escape valve. It’s an obvious reality.

There’ll be people who, during this confinement, don’t lose sight of the need to maintain a healthy and balanced diet. However, we can’t ignore those who have suffered from an eating disorder in the past.

On the other hand, it’s a fact that, during these weeks of confinement, people have been consuming more and more unhealthy foods. These foods really can channel your emotions. Classic snacks, soft drinks, and alcohol are indispensable items that many people look for first when they go to the supermarket.

However, another curious phenomenon is also occurring: yeast sales are increasing. We’ll discuss this a little later.

Emotional eating during lockdown: what to include on your shopping list

One thing we know from the realm of emotional psychology and nutrition is that, when people suffer from stress or anxiety, their eating habits start to change and what people have called emotional eating kicks in.

So, in a scenario like the present one, we’ve all made some sort of change to our diets, for better or worse. Below, discover the kinds of behavior patterns we’re seeing during this coronavirus home confinement.

Eating to avoid having to think. Choosing food that will create well-being and silence the negative emotions. These are the behavioral patterns that are determining what people are putting in their shopping carts these days.

We’re spending all our time at home. Thus, one way of making the hours more bearable is through cookies, cakes, snacks, wine, beer, and plenty of carbohydrates.

Your mind reaches a strange agreement with your emotions: eat, enjoy, and don’t worry. However, when food acts as an emotional outlet, there’s a big problem.

On average, the foods that help your body create serotonin and dopamine have a very short effect on your brain. There’s a high and then a low. They’re not satiating but they are addictive, which is why your brain tells you to eat more and more of these unhealthy products.

The current pandemic is creating a totally new type of stress. A potent mix of unforeseen situations loaded with anguish and unusual pressure is opening up before us.

It’s also a fact that we’re all living in a similar way, with similar behavior patterns. The contagion effect is almost inevitable in a world that’s hyper-connected through technology.

At the beginning of the crisis, we saw compulsive toilet paper purchasing. However, in recent weeks, there’s been an increase in the consumption of wine and a whole range of snack products that accompany our hours of teleworking or watching series.

Emotions are really eating us up these days (if you’ll pardon the pun), especially when we suffer from anxiety. However, we see another interesting behavior pattern here.

In light of the extra free time we all have, many people have decided to spend more time in the kitchen. The aim, in many cases, is to make the recipes that their mother, father, or grandparents used to make for us when we were children.

It’s a way of bringing back emotions and memories, a way of making time more bearable through a relaxing activity such as cooking.

Confinement is also shaping yet another interesting behavior pattern: hyperactivity. Some people are exercising in the most unusual ways. Others are making handicrafts, studying, and of course, cooking and later uploading the final product to their social networks in order to get “likes”. Beyond what we might think, all of this is also an emotional escape.

In the last few days, another of the most popular supermarket products has been yeast. There’s a sudden interest in making bread, desserts, and other bakery products.

There’s a clear pleasure in making these recipes. First of all, because it’s relaxing and also motivating. Working with the hands is always cathartic for the brain.

Secondly, because you can upload that recipe to Instagram later and get a “like”. You get encouragement and rewards from all sides – from those at home and also from those far away.

In conclusion, buying food, consuming it, and even making it ourselves is acting as emotional avoidance or as a way of escaping from our emotions during these days of confinement.

Above all, avoid getting into habits that are harmful to your health. Watch your consumption of alcohol and food that will only add calories and no nutrition to your body. Avoid emotional eating during lockdown. Now, more than ever, you really do need to look after yourself.

Coronavirus Anxiety: Seven Strategies to Help You
COVID-19 is completely altering our lifestyle. In a scenario of uncertainty, experiencing coronavirus anxiety is normal. However, you need to manage it. Read more »
Link copied!
Interesting Articles
Stories and Reflections
The Invention of Morel: a Beautiful Reflection on Immortality

Antonin Artaud's quotes are beautiful. Antoin explored practically all literary genres, although he became famous as a poet and playwright. As a…