The Consequences of Ignoring Jealousy in Children

Jealousy in children is a source of suffering for children, parents, guardians, and friends. This attitude can seriously erode relationships if it goes on. 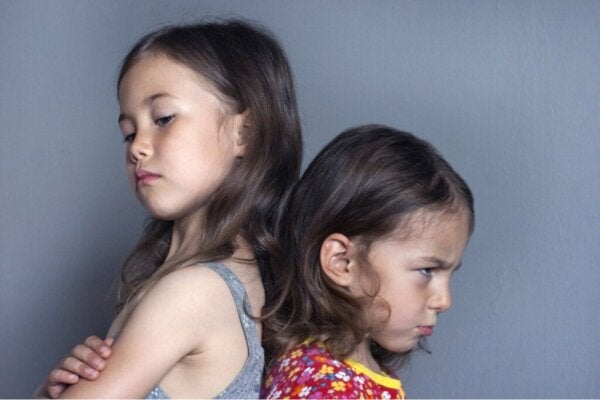 Once upon a time, there was a child who felt like they were the center of the universe. They alone had their parents’ attention. Then, one day, the child learned that a younger sibling was coming. This didn’t amuse the child at all. Fortunately, the parents soon learned that they had to pay attention to jealousy in their children as soon as possible so the problem wouldn’t escalate.

Unfortunately, the parents were overwhelmed by the problem and the child’s jealousy became chronic and even increased after a while. For this reason, the little boy’s relationship with his brother worsened. The whole family was eventually overwhelmed by this situation.

Does this problem sound familiar to you? This article presents the scenario as if it were a fictional story. However, this situation is very common and can lead to a lot of pain and suffering. It isn’t only triggered by the arrival of a younger brother. In fact, many reasons can lie behind jealousy in children.

So what’s the best course of action? Jealousy in children may or may not be justified, but it’s there and it’s real. Firstly, you need to take some preventive measures in order to keep it from happening at all. Then, observe the causes, analyze the symptoms, and, finally, seek professional help if the problem is beyond your control. Continue reading to find out more about what jealousy in children is about and why it happens.

Jealousy is defined as a subjective state that leads to frustration. It’s due to the belief that an individual isn’t loved back by those they love, as in the case of their parents, siblings, partners, relatives, and even pets. People don’t really believe there’s a lack of reciprocity; they mainly notice changes in the intensity and frequency of people’s affection.

In addition, jealousy may not be justified and the child may continue to receive the same attention as before, even more than their new sibling. However, the pain is real in the mind of the person who experiences it. This could be due to a clinical disorder that requires specialized care.

A child might be in pain due to their feelings of envy and resentment. However, it’s still a cognitive distortion that could lead to negative consequences.

“Never hate people who are jealous of you but respect their jealousy because they’re the ones who think that you’re better than them.”

This is common in children and it’s usually due to environmental and evolutionary factors. These could also be genetic and, thus, predispose the little one and even lead to serious consequences in their future life.

Jealousy during the attachment phase

This depends on the child’s age. The situation is particularly sensitive when a new sibling arrives at an early age, between the ages of two and five. This is because it happens during the child’s attachment phase.

The educational style of the caregivers, as well as the family climate at home, are also important factors to consider in the evolution and development of children and their reaction to jealousy.

The child’s environment, their own experiences, ability to socialize, tolerance, and possible emotional deficiencies are all key factors as well.

Symptoms of jealousy in children

Various indicators can show you when you’re dealing with a jealous child, be it founded or unfounded. These are the most common:

Strategies to deter jealousy in children

When you’re trying to deter jealousy in children, you must consider various useful strategies. Thus, here are some important points when you’re working on it:

Deterring jealousy in children is important, as it can be a source of pain that can also affect interpersonal relationships.

Seek professional help if the situation is beyond your control, as a professional should be able to tell you what the best course of action is.

The Trophy Child: The Effects of Favoritism Among Siblings
The trophy child is a porcelain doll, smiling at the camera. They are also the favorite among the siblings. Read about the negative effects this can have! Read more »

Link copied!
Interesting Articles
Educational Psychology
What Does a School Counselor Do?