How Jealousy Can Make You Lose Your Mind 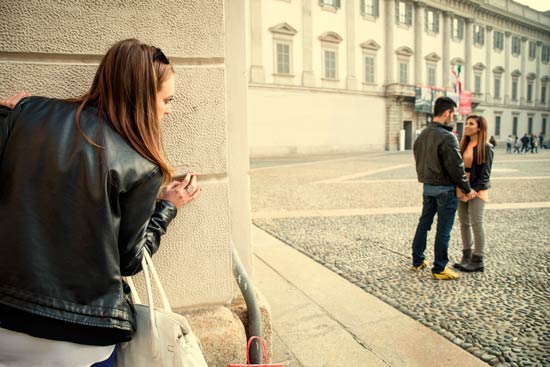 Jealousy is an emotion that comes out of an excessive desire to be the exclusive owner of something. We usually think about it in terms of people and love. The dictionary defines the word jealousy as, “jealous resentment against a rival, a person enjoying success or advantage, etc., or against another’s success or advantage itself.”

We’re not just talking about a partner or spouse. Jealous behavior can happen in other relationships too, such like a parent’s love for their children, or in a friendship. You may even feel jealousy towards things, and so you don’t lend them out because you want to be the only one to enjoy them. You consider them to be personal possessions.

When does jealousy start?

Jealousy can start even in childhood. Children may be jealous of their siblings in an attempt to get the exclusive affection of one or both parents. Children don’t want to share their parents’ love because they think that means there will be less for themselves.

Something similar may also happen in parenthood. A father or mother may fear losing their child’s love if they get extra close to the other parent. Other times they may want all the child’s affection for themselves, jealous that their child would want to give their love and affection to someone else.

In adolescence, jealousy among friends is especially common. That’s when young people start making close friends and sharing almost everything with them. When a new friend joins a group then they may feel like their status is in jeopardy. They may refuse to expand their group of friends or share their friendship with anyone else.

Jealousy in a couple

The kind of jealousy we see most often is what happens in couples. In these cases, having an excessive desire to possess the other person, on top of our inherent selfishness, is compounded by issues of fidelity and infidelity.

Traditionally, society portrays women as more jealous than men. That’s why society often frowns upon men when it’s them who are jealous. The woman turns from “princess” to “witch.”

Because of this, men may feel they have much more to lose in a hypothetical “battle of jealousy.” So men hardly ever admit that they’re jealous. Having said that, things are starting to change, albeit slowly. We believe it’s important that these gender stereotypes change once and for all.

Communication and trust and overcome jealousy

Jealousy is unfortunately very common between lovers. It’s not uncommon for one or the other to spy or keep a watchful eye on their other half. This situation of continuous distrust creates tension. The “other half” feels watched. And there’s usually no valid reason for this behavior.

Communication and trust are two of the most important pillars of a relationship. Jealousy can really break down a relationship. The person with doubts doesn’t usually try to quell their fears by asking direct questions. Instead, they act like a detective.

Too much jealousy — when being jealous becomes a disease

Research tells us that certain personality types are more likely to be jealous. What are these people like? Egocentric, distrustful, insecure, and narcissistic.

Obsessive jealousy is when a person’s jealous thoughts are continuous and very intrusive. They become compulsive. They’re constantly checking on their partner’s behavior, a lot of times monitoring their phone. In extreme cases, jealousy causes delusions, and yet people with this condition don’t usually think they’re sick.

Here, when they come across a reasonably reliable sign of infidelity, the jealous party comes up with a whole scenario in their mind about their partner’s supposed infidelity. And it can go on and on and on.

How to beat excessive jealousy

The first step is — like with so many other problems — to acknowledge it. If there is no awareness of the condition then you’re unlikely to seek help. Maybe there is actually a good reason for your jealousy, but sometimes there is none at all.

It’s a good idea to write down what situations make you feel jealous, what your thoughts and behavior are like, and what the consequences could be. Behind your jealousy there are distorted thoughts about the relationship and how your significant other is acting. Once you’ve collected this information, analyze it. Look for evidence that backs up your suspicions.

What should I do if I feel jealous?

Here are some basic guidelines that can help. Don’t…

After reading these tips and putting them into practice, if you still are overly jealous, the best thing to do is to get in touch with a good therapist to help you. While jealous people get bad press, there’s no denying that they suffer and it is a very real suffering. If jealousy is affecting your life to any degree, don’t be ashamed. Seek help.

Jealousy Is Not Love
Jealousy is caused by insecurity, possessiveness, and fears that distance us from love, contaminate our relationships, and destroy our freedom. Read more »
Link copied!
Interesting Articles
Personal Development
Stay Open-Minded - Things Aren't What They Seem

It happens to me a lot - I'm sad without really knowing why. There are days like that, when sadness…

Wellness
How to live out our desires without limitations

We are torn between our desires and the limitations imposed on us. Life continuously poses us challenges and we have to…