The Challenges of an Anxious-Avoidant Relationship

An anxious-avoidant relationship is one in which anxiety has the predominant role, basically because one distrusts the other. This is often due to anxious attachment in some, while in others it's the result of an elusive or indolent partner. 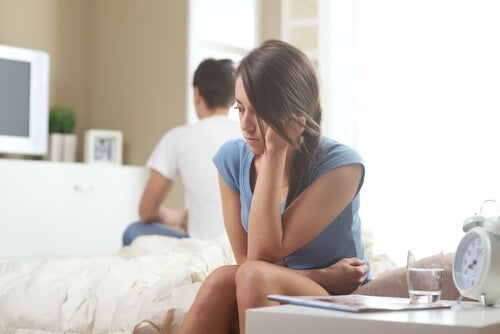 An anxious-avoidant relationship is a type of bond in which restlessness, possessiveness, and insecurity predominate. In principle, it’s due to unresolved issues in those who establish this type of connection. However, there are times when anxious behavior is also unleashed or fueled by the other partner.

Some say that paranoid people can also be persecuted and this is more or less what happens in anxious-avoidant relationships. There’s a basic feeling of insecurity but the person who feels it isn’t the same one who either nurtures or triggers it. In other words, one of the partners can feed anxious attachment.

It isn’t easy to distinguish a person with anxious attachment from one whose partner is indeed evasive and triggers anxiety. For the same reason, many people in situations like this can’t answer a simple question. Is my insecurity making me anxious or is it my partner’s behavior?

“In dating, avoidants can be charming and have learned all the social graces—they often know how they are expected to act in courtship and can play the role well for a time.”

Anxious attachment, also called “ambivalent attachment”, is a form of bond in which there’s a great desire for intimacy with one’s lover. However, at the same time, there’s a deep fear of losing that person. This feeling leads to an apprehensive interpretation of any manifestation, though minimal, of distancing or rejection.

In fact, an anxious person interprets many types of behaviors that neither involve distancing nor mean rejection this way. Thus, they greatly mistrust their significant other and everything related to it prevails in the end. Also, there’s a disproportionate reaction to countless behaviors that don’t deserve it.

In these cases, the partner’s response is rather important. Ideally, you should adopt an understanding attitude and know that this anxiety stems from deep insecurities and unresolved trauma at times. A person with anxious attachment needs more warmth and reassurance from their partner. Thus, the anxiety will decrease if they feel confident about it.

Someone with anxious attachment doesn’t need a person to take charge of their insecurity and fears. However, they don’t need someone who makes them feel insecure either. An avoidant partner does just that. In fact, they increase their significant other’s anxiety, thus reinforcing this harmful type of attachment. Although they may not even realize it most of the time, they could also use it as a power play.

An elusive partner is one who flees or remains silent in the face of conflict. Also, one who wants a quick fix for a problem, without really delving into what’s happening. Or perhaps it’s one who intellectualizes everything and doesn’t allow their emotions to surface. Likewise, it could be one who becomes irritated or uncomfortable when confronted with their partner’s emotional expression.

Another characteristic of this type of person is their emotional lack of availability. It’s quite harmful for an anxious person to have a partner who doesn’t want to fully be in a relationship and avoids commitment by insisting they want no “ties”. They may also ridicule or minimize emotions. This type of behavior only leads to insecurity in their significant other.

It’s often difficult to know when you’re caught in an anxious-avoidant relationship because one of you can’t overcome certain inappropriate behaviors. Perhaps you have no attachment problems but become anxious and insecure when your partner says and does things that lead to unresolved conflicts.

To know if you’re caught in an anxious-avoidant relationship because you’re uncomfortable in it, you must identify if such fears are completely valid. For instance, you may be afraid that:

Feeling Lonely in Your Relationship
Feeling lonely in your relationship can be extremely painful. It hurts not to know why your partner is acting emotionally indifferent. Read more »

Sigmund Freud used to say that every romantic emotional bond consists of two partners and their fears. As striking as…

You can find quotes about romantic love everywhere (just like love itself). Some of them talk about the tender side…