Distrust in a Romantic Relationship 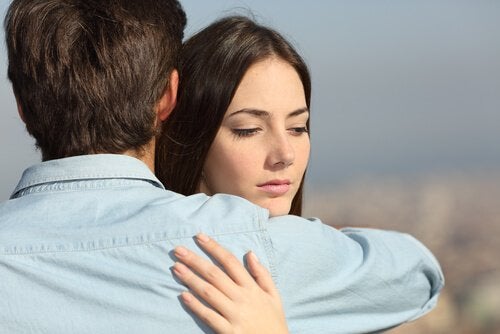 Distrust in a romantic relationship is like cancer. It often starts unnoticeably, but soon spreads and metastasizes. It’s one of the main factors that, if left unchecked, can deteriorate the bond between two individuals and even destroy it.

There’s an important idea regarding the concept. Trust is learned, but so is distrust. It’s not a feeling that pops out of nowhere, but rather the result of something that emerges from experience. In other words, when you’re in a relationship, you bring all your own baggage, which partly explains how trusting you’ll be with your partner.

In normal scenarios, distrust in a couple arises after one or both members don’t seem steady. However, in more extreme cases, such neurosis is present even without enough reasons to be distrustful. In this way, regardless of the situation and its causes, distrust is an issue that must be dealt with and resolved.

“What loneliness is more lonely than distrust?”

Why distrust emerges in a romantic relationship

There are also, however, lots of situations in which distrust comes from nothing. These are cases in which there’s a predisposition to distrust. The main reasons for these scenarios are the following:

Once distrust has meddled with the relationship, it’s not easy to make it go away. However, it’s not impossible. It just demands a significant amount of work and perseverance. It’s definitely worth it, as loving each other is always reason enough to fight for a romantic relationship.

The best way to start is by evaluating the reasons why there’s distrust in the relationship. It’s essential to determine whether the reasons behind it are objective or if they’re coming from a neurotic stance.

Also, it’s important to reflect upon your expectations for your significant other. Every human being fails. This means that, if one partner is waiting for the other to be perfect in order to trust them, they’re wasting their time. Trust doesn’t develop when the other person doesn’t fail. Rather, it has to do with having the certainty that, when they fail, they’re not doing it deliberately or in bad faith.

Dialogue: The only real solution

Having an open dialogue is always the ideal solution for distrust issues in a romantic relationship. This poses a paradox since you need to trust each other in order to dialogue. However, it’s the only way to come to an understanding or finally realize that the relationship must end.

Having a dialogue means talking about the reasons behind your mistrust calmy and lovingly. The key lies in focusing on yourself instead of on the other person. This dialogue is not to point fingers at each other, but to share how they have made us feel with their words and actions. The goal is to help them understand where our suffering is coming from.

Having a dialogue also implies the need to listen without reacting automatically to everything. Taking time to process what the other person is saying, without judging them. When there’s love, communication strengthens the relationship and helps find the way to move forward. What’s more, if a dialogue is impossible and distrust persists, it’s clearly a sign that the best option might be to end the relationship once and for all.

What Does Psychology Say About Infidelity?
Infidelity is an act committed by one person in a couple, breaking one of the pillars of a relationship, loyalty. Read more »
Link copied!
Interesting Articles
Wellness
Daily Opportunities to Learn to Accept Emotions

Wellness
When Change in a Relationship Arrives too Late

Emotions
Do You Know What Your Basic and Secondary Emotions Are?

Some relationships are like unsalted eggs: tasteless, insubstantial, anchored in a monotonous situation that drowns you in the long run. This…

The idea that "poverty builds character" is something that most people say so you don't feel bad, usually when you're…