The Hammer and the Wall in a Relationship

There are changes and, therefore, adjustments in every relationship. The hammer and the wall type of problems begin when you're incapable of adapting to the new conditions, using unsuitable strategies to try to return to an earlier point. 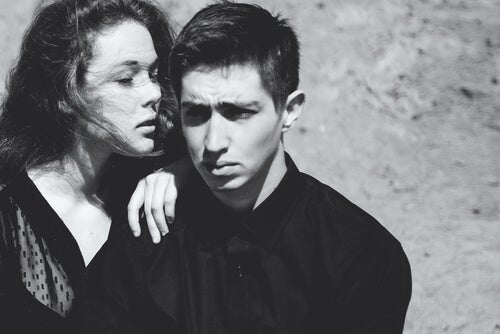 Romantic relationships aren’t easy… at least that’s what some people think. Problems often arise because there’s a hammer and a wall in a relationship or its environment, and the partners haven’t realized it yet. Still, they use the hammer to try to break down any walls within their relationship.

Next, through a brief story, you’ll learn the metaphor of the hammer and the wall. It’s about the fear of losing the emotional connection with your significant other. However, you need to understand that, as much as you hammer, you must respect each other’s space in a relationship.

The hammer and the wall

There was once a woman named Alicia who didn’t understand what was happening to Juan, her significant other. He was quieter than usual and, overall, had been acting a little strange for days. She was concerned about him being distant. However, when she asked if something was wrong, his answer was always “No”.

The situation didn’t improve and Alicia grew more tense and nervous as the days went by. Juan seemed to drift further and further away from her and this drove her insane. Of course, he continued to reassure her that everything was fine, that he was just introspective. But she couldn’t understand his silence because, to her, it meant that something was wrong in their relationship.

Alicia had many questions. Why did Juan need to be by himself? What was wrong? Why wasn’t he happy? But her persistence and plans to do things together didn’t seem to resolve the situation. The thing is that Juan needed space and time for himself, and Alicia just couldn’t understand it.

You may not know it but misunderstanding your partner’s needs for alone time can lead to more serious conflicts.

As we mentioned above, Alicia was very insecure and such a state derived from her interpretation of Juan’s behavior. She just couldn’t understand why Juan needed time for himself. Thus, since she couldn’t understand the situation, she decided to try to fix it.

And this is how the hammer and the wall entered Alicia and Juan’s relationship and led to further conflicts that became more difficult to solve. For her, the words “alone time” or “space” only meant that her partner was drifting away from her, which made her very anxious.

Alicia didn’t give Juan the space he needed, so he began to build a bigger wall around himself. However, like a hammer, she began to try to knock it down. All she was trying to do was reduce the distance he had put between them.

The solution may seem simple from an outside perspective. If Alicia changed her strategy and opted to give Juan the space he needed, there may have been a natural readjustment in the relationship. You can see how Alicia’s anxiety and coping strategy only further damaged the relationship. However, keep in mind that this is your perspective as an outsider.

The hammer and the wall – space is important

All relationships go through the “falling in love” stage, where you share many activities. The best definition, as this study points out, is “The state of a person dominated by a lively feeling towards another whom they consider their greatest treasure; with which they wish to be with forever, and whom they would protect with their own life, if necessary“.

However, over time, each partner needs to recover a part of their personal space. They may want to use it to spend time with friends or doing activities that don’t include their partner.

If you’re in a period of transition between these two phases, you may want to analyze if you’re doing activities that don’t include your partner. Also, you must understand that each one of you needs their own space. Thus, you may need more or less time than them, meaning it’s all about balance.

Of course, this doesn’t translate into “I no longer love my partner” or “The relationship has cooled down”. It’s actually quite the contrary, as space is essential in any relationship. It’ll keep you from feeling trapped and, thus, there’ll be no hammer and wall in your life together.

Each relationship is a universe and manifests itself in how big or small the need for this space is. Thus, you can identify couples that are great at keeping a small personal space. Similarly, there are those who do it with a larger functional space. It depends on where they find balance.

In any case, you must try to overcome resistance with strategies other than that of the hammer and the wall. In addition, if you happen to grab “the hammer” due to insecurity, then it’s best to put yourself in the hands of a professional. They can help you adopt a spectator perspective so you can identify the problem. Also, they’ll provide you with tools to regain your lost balance without further damaging your relationship.

Relationships and Tensions during Confinement
Tensions during confinement are common in people who live together. Read this interesting article to learn more about this! Read more »
Link copied!
Interesting Articles
Conflicts
Tired of Always Arguing with your Partner?