The Book Thief and the Power of Words

The Book Thief doesn't stand out for its account of Nazism. Instead, it portrays the daily life of a city still uncertain about their fate. Only two things are certain there: words are a powerful weapon and death becomes omnipresent. 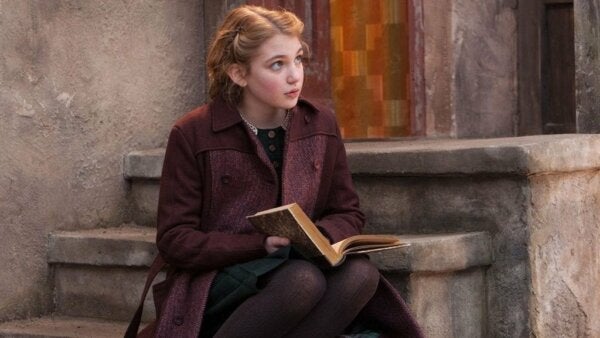 World War II is a scenario filmmakers have been exploiting for several decades. Thus, you may roll your eyes when you hear that another film on this subject just came out. Stick around though, as you’ll surely enjoy this article about The Book Thief.

It’s not that films on this subject are boring or irrelevant. They’re definitely interesting and are a great way to talk about the past and learn from it so we don’t make the same mistakes. However, there are times when you just don’t want to deal with such a bumming subject and that’s understandable. This is why you might think that The Book Thief, based on the novel of the same name by Markus Zusak, is going to be just another sad story.

This film tells a different story about the present, the past, and the future. It’s also about the impending death that’s everyone’s fate, that inevitable destiny that’s always lurking around. The sensitive types may tend to reject this type of film but The Book Thief isn’t exactly a tearjerker. It’s mainly about accepting the natural cycle of life.

“The only thing worse than a boy who hates you: a boy that loves you.”

Another wonderful part about this film is that it doesn’t revolve around a concentration camp and Adolf doesn’t make a physical appearance. He’s definitely around though, but mainly as an omnipresent threat that’s invisible but degenerate. Thus, the film places you in the everyday life of a girl a city whose inhabitants aren’t yet aware of what’s about to happen. In fact, they continue to go on about their daily lives and won’t know their fate until it arrives.

Some of the characters know about the rise of Nazism but don’t really know what it entitles while others do and even welcome it. A girl whose life has been unfortunate stands out from among the crowd. Firstly, she separates from her mother and, later, she deals with the death of her brother.

Liesel, the girl, ends up being adopted by a much older couple. At first, she feels like a stranger, doesn’t get along with her new mother, and doesn’t really understand how the world works. Why are they saying she’s a communist? You soon find yourself caught in a story that oscillates between myth and reality, between life and death, through the eyes of Liesel and the voice of death.

Reading as an escape

The Book Thief isn’t a must-see film nor is it one of the most praised films of its kind. However, it does have an important message about the power of words. Thus, books are also the main protagonist in this film. This is because they serve as an escape route for the other protagonists to survive in their awful situation. As we mentioned above, the action takes place within the framework of the city, in the daily life of the working-class families who were caught off guard by the Nazis.

Liesel arrives at her new home. She’s an only child and has already lost the most important people in her life. In addition, she can’t read and her schoolmates tease her about it. Also, Liesel’s parents were communists, so that label reaches her as well.

It’s unfortunate to witness how children repeat the mean things adults say, even when they don’t even know the meaning of the words. Thus, some children insult Liesel by calling her “communist”. They don’t know Liesel nor what it actually means to be a communist.

The indoctrination in the school is also evident. The children repeat words without knowing what they mean. This is precisely the message of the film. Liesel is illiterate and, yet, the other children who can read don’t really know the meaning of many of the words in their vocabulary. It begs the question: what exactly does it mean to be illiterate?

At the beginning of the film, Liesel steals a book during her brother’s funeral. One with an unknown meaning, but means a lot to her. This is because it’s a connection with her past, with her brother. Her father finds it and teaches her how to read. The book isn’t a novel or a story, but a simple manual for gravediggers. Death makes an appearance once again.

Liesel finds an important way to escape in words and books and learns to immerse herself in other worlds and learn from them. Books are freedom when they lead to thinking, so the Nazi regime didn’t like them. Thus, they begin to burn books they consider “immoral” and Liesel manages to rescue one.

This gesture is significant because Liesel then shares her love of books and words with her family. Also with Max, the young Jewish man hiding in her family’s basement. Later, she also shares her secret with her friend Rudy and, somehow, with the mayor’s wife. The books allow Liesel to dream and are a way for Max to “get out” of his hiding spot.

The true power of the word manifests when city dwellers must hide in a bomb shelter while the city is under attack. At this point, worry, fear, and pain take over. Thus, Liesel decides to tell a story, immersing the frightened people with her love of words. She succeeds and there’s calm in the dark place; words have defeated bombs.

No one escapes death

Somehow, the main fears of the protagonists are fear of death and a fear of Hitler. Neither of these is physically in the film but the viewer can feel their presence. There’s a rather interesting moment when Liesel and Rudy scream “I hate Hitler!” This scream means the loss of fear. There’s no more terror and they’re ready for whatever comes their way.

The same goes for death. In fact, Liesel has been aware of it since childhood because she’s seen it everywhere. It didn’t stop her from living though. Everyone dies at some point or another so death is the only thing that’s for sure in a person’s life regardless of money and borders.

Liesel dodges death on several occasions and the same thing happens to Max, the first one to die. Other characters won’t have the same fate, but in the end, the time’s up for Liesel and Max. Death has been lurking since the beginning of their lives after all.

Final notes on The Book Thief

Death has a huge presence in this movie. It sort of speaks in a calm and deliberate voice. You should fear the living if anything. Thus, even in the worst-case scenario, Liesel remains optimistic and embraces the mayor’s wife after the terrible bombing that devastated their town.

The voice-over is ironic at times, but it connects you with the reality of its nature. It also acts as a judge and creates a balance. It’s a reference to art and to the memento mori cliché. Death is present as a sort of justice; benevolent at times but often merciless and still, it isn’t the enemy.

As you can see, The Book Thief is a story of human adversity, friendship, and learning in the midst of a miserable, dark, and suffocating world. Of course, it’s a fantasy and lacks the impact of real-life stories such as The Diary of Anne Frank. It’s still a pleasant story though, one that reminds the viewer to accept their destiny without fear.

The Reader: Traumas, Secrets, and Passion
The Reader is a 2008 film directed by Stephen Daldry which helps us reflect on many things. Read all about it in this article! Read more »
Link copied!
Interesting Articles
Cinema, Television, and Psychology
The Rocky Horror Picture Show: A Sexual Revolution and Liberation