American Horror Story: Asylum is the most complete and complex season of the anthology series. It was well-received by critics and the public, but it's not for everyone. Today, we'll discover the evil that reigns behind the thick walls of a 60s insane asylum. 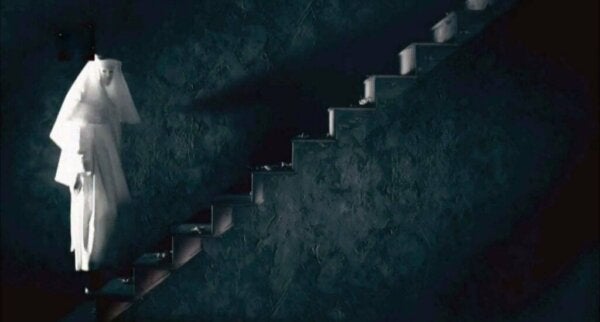 Ryan Murphy and Brad Falchuk, creators of the anthology series American Horror Story (AHS), already have nine seasons under their belts. The most recent, Apocalypse, was highly anticipated because of the novel crossover element of the season. However, the general feeling is that it was somewhat predictable. Sure, it had its moments, but most fans agree it wasn’t as good as the other seasons. That’s why, today, I’d like to revisit what’s, in my opinion, the show’s best season: American Horror Story: Asylum.

Given the anthological nature of the series, some seasons have been brilliant and others fairly boring. These opinions are subjective, of course, and others may feel differently. But if you look at any online ranking, AHS Asylum is always among the top three.

American Horror Story: Asylum is popular because it manages to combine so many elements in a single season. There are some plotlines that are more powerful than others, but the important thing is the overall effect, and Asylum was very successful in that sense. It’s a season that has something for everyone. Supernatural elements, murders, mystery, aliens… It somehow uses all of the main themes of the horror genre in just 13 episodes. As if that weren’t enough, it’s also the season that most closely related to psychology.

Asylum is the most ambitious season because, as we mentioned, it uses nearly every possible approach available in the horror genre. Its complexity and breadth could have easily resulted in an incoherent season. Against all odds, however, the series managed to connect all the dots without collapsing in on itself.

Asylum is the second season of AHS, which is something else that plays in its favor. Other well-received seasons, such as Roanoke, never enjoyed the popularity that Aslyum did, due, perhaps, to the gradual loss of fans of the series. The success of the first season, Murder House, generated some suspense about what the next season would bring. Asylum was worth the wait. In fact, after 9 seasons, it seems like it’ll stay in the top spot.

This fascinating season has some of the best performances of the series. Lana Winters (Sarah Paulson) is one of the most well-loved characters. Nearly all of the female characters shine in their own way, not to mention Kit Walker (Evan Peters) and the incredible Dr. Thredson (Zachary Quinto).

This is one of the seasons with excellent character development, in contrast to the random and often inconsistent development of the first season.

The narrative is complex, we can’t deny that. It’s difficult to connect the episodes and the stories in the show. There are countless characters and plotlines, which can be confusing. Nevertheless, the season achieves its goal and immerses readers into the horrors of its world.

Asylum takes us to a place where atrocity reins and humanity disappears. The environment is asphyxiation. You won’t be able to get the French song, “Dominique”, out of your head. It plays over and over again as a constant reminder that you’re in a paradise of insanity.

American Horror Story: Asylum and the horrors of insanity

In some of the episodes, the chaos is so intense that you’re not sure if the characters have lost their minds or if you’re actually the one going insane. Asylum is insanity in it’s purest form. It’s in the very air of the place, it oozes from the walls of Briarcliff (the mental institution where the season takes place). You also feel it in the way the plot unfolds.

In the middle of the labyrinth that’s Briarcliff, you find a series of characters who, unfortunately, have ended up in the worst possible place. Insanity hasn’t always been defined the same way. Michel Foucault wrote about this in his book, Madness and Civilization: A History of Insanity in the Age of Reason.

What you see in Asylum is truly blood-curdling. Can a young journalist be written off as mentally ill just for being a lesbian? Can a nymphomaniac be locked up in an institution for criminals with mental illness?

Insanity according to the Church

If you delve a little into the past, you’ll quickly realize that many things we consider normal today were highly problematic in the past. You also can’t forget that Briarcliff is run by the Church. Consequently, certain behavior, especially of a sexual nature, will be repressed.

Corporal punishment and electroshocks to “cure” homosexuality were the order of the day. Most of the patients in Briarcliff don’t just suffer from an illness (or what people considered illness back then) but are also criminals.

This group of mentally-ill criminals who have committed atrocious acts is locked up in a forgotten place, cut off from other people. Does it remind you a bit of Shutter Island? Anything that isn’t “worthy” of being out in society is excluded and subjected to the worst horrors imaginable.

The thing is that, while many of the patients are actual criminals, the crime of others, such as Lana, is only being gay (and wanting to know too much). Everything that’s hidden under lock and key: a killer psychiatrist and a Nazi doctor who considers his patients less-than-human subjects he can freely experiment on.

Sex, blasphemy, blood, death, and corruption run rampant in a series that’s definitely not for everyone.

Asylum immerses viewers in the underworld of insanity. The horrors of the insane asylum of days past where anything was possible. In the show, of course, these ideas are all taken to their extremes. American Horror Story, after all, doesn’t like to do things halfway. All or nothing is how it goes in Briarcliff. Locking these characters up in this dismal, almost decaying place and then taking every situation to its extreme. The character’s limits are tested and the viewers get to experience the worst possible scenarios.

The moral of this hell on Earth is that people labeled as “insane” or “crazy” are always excluded. Once society puts them into that category, it’s nearly impossible to get out of it and no one will listen to you. That’s the perfect context for the most outrageous and egregious atrocities because it’s unlikely that anyone will find out or believe the victims.

Therefore, what you find is that there’s no hope and no one understands kindness. Even the young and innocent Mary Eunice, the only nun who understands compassion, ends up possessed by the devil.

Sister Jude, on the other hand, does everything in her power to repress the sexual behavior of the patients, all the while wearing red underwear and having sexual fantasies about Monsignor Timothy Howard. Monsignor, for his part, ignores the Nazi doctor’s experiments in exchange for bribes. He’s also willing to do almost anything to become Cardinal.

The institutionalization of evil

Everything that’s taboo and unspeakable comes up with the characters on Asylum. Interestingly, the characters who are the least evil are the patients. Dr. Thredson, the psychiatrist, is the absolute incarnation of evil. At first, it seems as if he’s trying to actually help his patient, Kit Walker, but the only thing that he’s after is using him as a scapegoat for the murders he committed.

At first, Briarcliff is portrayed as a place that houses the worst criminals and mentally ill patients. This is partially true, but the show flips that story on its head when it turns out that the truly horrifying and cruel people are the ones who run the institution. After thinking critically about the show, all I can do is ask myself if the viewers are actually the crazy ones of it we’ve simply succumbed to a kind of catharsis.

“All monsters are human.”