Life is Beautiful - a Film about Overcoming Adversities 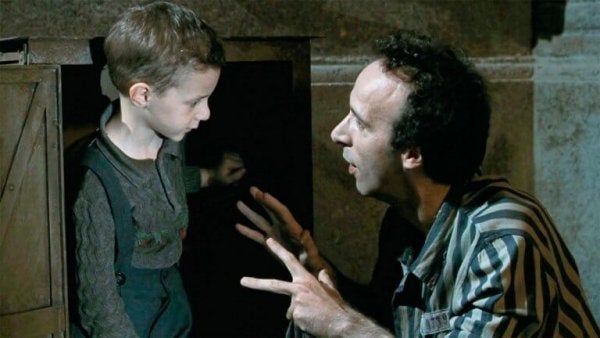 Life is Beautiful is probably the most internationally recognized and acclaimed Italian film. The script, the soundtrack and the actors’ interpretations make it an unforgettable film, capable of making us laugh and cry and transmitting an infinity of emotions. In short, it is a masterpiece of cinema loaded with messages, directed by and starring Roberto Benigni in 1997.

This film is inspired by the book Alla fine ho sconfitto Hitler (In the End, I Beat Hitler) by Rubino Romeo Salmoni, an Auschwitz survivor who narrates his experience. The film is about the story of Guido Orefice, a Jewish-Italian who moves to Arezzo to work in his uncle’s hotel. He runs into Dora, a teacher from a wealthy family close to the fascist regime. Guido does everything possible to win Dora over. He always appears unexpectedly and tries to surprise her in every possible way.

Finally, he wins her over, and they have a son, Giosue. Life seems to favor Guido. However, World War II causes his whole life to fall apart and he ends up in a concentration camp.

Life is Beautiful takes us to an Italy submerged in fascism and leads us to the horrors of the concentration camps. It does it in a different way. It presents the story as a kind of tale with a bittersweet ending.

“This is a simple story, but not an easy one to tell. Like a fable, there is sorrow,

and like a fable, it is full of wonder and happiness”.

Life is Beautiful, from the comic to the tragic

Life is Beautiful begins in a cheerful, humorous, and fun tone. Due to the first scenes, we can hardly guess that we are watching a drama, even though we see the rise of fascism in Italy from the beginning.

The comedy in Life is Beautiful is in the small details, in small moments that lead to comedy. However, what is really interesting is how an unpleasant and spooky situation manages to make us smile.

The Manifesto of Race was published in 1938 due to the fascist ideology that reigned at the time. It was a text signed by Italian scientists who endorsed the existence of human races. These races were divided into inferior and superior races, where Aryans were, of course, the superior race. A pure Italian race. These ideas together with the fascist racial laws were taught in schools and so the children would avoid spending time with Jews to not diminish their “purity”.

Guido pretends to be an inspector of the ministry who must speak to the children about the Manifesto of Race. Actually, he wants to get Dora’s attention, but this scene just shows that we are all the same.

Guido says that his navel is an authentic Italian navel, his ears the same, etc. Children, when they see this, imitate him and laugh.  Guido manages to undo the differences the manifesto appeals to, since he is Jewish and does not present any physical characteristic that distinguishes him from those “purely Aryan” Italian children.

This scene, without doubt, brings a smile to us all. But it is a bittersweet smile if we consider the true meaning of those words of a gentleman from the ministry talking about human races.

Guido mocks all those beliefs, and dismantles all racist ideology with witty and funny comments. He is a character that we fall for from the beginning. He is carefree, very creative and his fight to win Dora over fascinates us. Nothing stops him, not even fascism.

“Last night, I dreamt about you all night! We were going to the movies. You were wearing that pink suit…”

The life of Guido and his family is cut off by the Holocaust. Guido is sent, with his son and uncle, to a concentration camp. Dora, being Italian and not Jewish, does not have to go, but decides to leave voluntarily to try to be with her family.

From this moment, the film takes a radical turn, the cheerful and carefree tone walks towards tragedy. But Guido does not lose his smile for a moment, he always tries to fight for his survival and that of his family and begins to invent a story to keep little Giosue from suffering.

The struggle and sacrifice of Guido

A phrase, a belief or an idea can make the world of a person change completely. It can transform our way of seeing life, and make everything make sense. Ferruccio, a friend of Guido, tells him at the beginning of the film that according to Schopenhauer “…with willpower, you can do anything”. This phrase will mark Guido forever. At first, he will use it comically, but over time, it becomes his way of life.

Guido has a purpose, he wants to survive, but, above all, he wants his son to survive. He tries to keep his son from ever losing his smile, from being happy even when in hell, he will fight to the end. He sacrifices his own security so that his son does not see the horrors of the concentration camp. He will do everything possible to find Dora and send him signals so that he knows they are still alive.

Guido is an example of struggling against and overcoming adversity. Using his imagination and will, he creates a false reality so that his child is not aware of what they are living through. He makes his child believe that everything is a game, that they are free and can leave when they want. But if they endure and manage to win a thousand points, they will have their reward.  Giosue has always dreamed of having a real tank, so Guido will make him believe this is the prize, in this way, he creates a will to live in Giosue.

Guido does not know if they will survive. He does not know how long they will stay in the concentration camp. But his eagerness to survive is stronger than any uncertainty. Do not let your child see you devastated, sad or not wanting to live. Life is Beautiful shows us that happiness, sometimes, is in our way of looking at life, in accepting and facing adversity.

Despite the great genocide that took place in the concentration camps, there were also survivors who managed to face torture, hunger and injustice. An example of this is the psychiatrist Viktor Frankl who, after surviving a concentration camp, published Man’s Search for Meaning. He speaks about his experience in the book, and adds a famous Nietzsche quote that can accurately summarize the plot of Life is Beautiful: “He who has a why to live for can bear almost any how”.

Life is Beautiful is an example of overcoming. It makes us see beauty in horror and freedom even where there is none, makes us laugh and cry… Guido had a reason and a will to live and managed to create that feeling in his son. In this way, despite the rawness of the film, we could say that his struggle and his effort paid off.

“This is my story. This is the sacrifice my father made. This was his gift to me.”.

Freedom Means Doing Whatever You Want?
Freedom means taking risks. Freedom demands that you bear the weight of your decisions. It isn't just doing whatever you want at the moment. Read more »
Link copied!
Interesting Articles
Cinema, Television, and Psychology
Don't F**k with Cats: Hunting an Internet Killer